Yesterday, Ruth and I were in New Hampshire for the Lake Winnipesaukee Relay.  Lake Winnie is one of the regular stops on our yearly running calendar.  I’ve run Lake Winnie every year for the last eleven years (I’ve run all eight legs at least once), and Ruth has come with me every year since we first met.  The eight-leg, 65-mile relay race starts at the Funspot Arcade and takes a very challenging route up and down the hills around the lake.

Last year, when I turned 50, I was looking forward to being on a competitive team again.  Our ringers from Whirlaway kept me off the fast Men’s Seniors team so we put together a Mixed Seniors team that finished second in our division.  This year, because of everything else I’ve got scheduled, I was going do my long run before the weekend and then show up at the race to fill out a “just for fun” team.  Then Shaun asked if I’d be interested in running on an Ultra team with him and Adena.  They’re both focused on training for ultramarathons, so we were all happy to get in a long run instead of racing.  “Ultra team” might have been a misnomer, since none of us were running more than 24 miles, but all of them were hard miles.

After Ruth and I drove north Friday, we had an excellent dinner at Camp in Meredith with Ruthanne, Alison, and Jerome.  I was tempted by the grilled cheese and bacon sandwich, but I decided on the lobster mac and cheese, followed by half of Ruth’s upscale S’Mores .  Hey, I was carbo-loading.  Then we went back to our hotel for a night of tortuous tossing and turning next to an air conditioning system that wasn’t up to the challenge of keeping the room at an even temperature, no matter how loudly it tried. 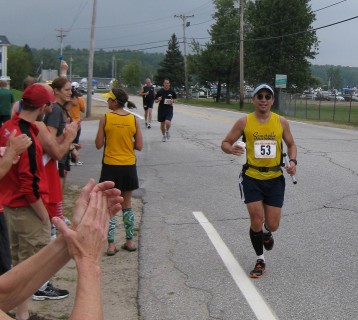 Saturday morning I ran legs 1 and 2, a 21 mile route featuring a five mile climb to the Gunstock Mountain ski area followed by a three mile plummet back to the lake.  I went out at a solid training pace that put me in the middle of the pack through leg 1.  It was humid, but the sun was behind some clouds and Shaun and Adena met me with a fresh water bottle every five miles, so I wasn’t too uncomfortable.

Ruth was running leg 2 for a “just for fun” team put together by Steve Pepe.  Steve was going to run leg 1 for Ruth’s team, but at the last minute he swapped legs with Matt, a new guy and a much faster runner.  I had a fond hope that I’d be able to catch Ruth before we finished leg 2, but instead of being five or ten minutes behind Steve at the first exchange, I was about 13 minutes in back of Matt.  I made up about 9 minutes of that gap during the second leg, but I never got within sight of Ruth before we reached Alton Bay.  That was probably a good thing.  If I saw Ruth ahead of me, I might have started racing to catch her.  Instead, I had the steady training run that I was hoping for.

After handing off to Shaun for legs 3, 4, and 5, I changed into my dry clothes and Adena and I stopped at the country store to buy lunch.  I was a little sore after pounding downhill from the ski area, but other than that I felt fine.  Still, I was happy to sit and rest when we got in the car to track down Shaun so we could support him while he ran.

The sun came out while I was finishing my leg, which meant that Shaun got to suffer in the heat for most of his 24 miles.  It clouded up again just before he handed off to Adena for the last three legs.  She had excellent running weather until the skies opened up while she was running leg 8.  While Shaun and I were back at the Funspot huddled under a tent with other runners cheering for teams as they finished, Adena got to wade through rivers of rain coursing down some of the biggest hills on the course.

The clock read 9:52:19 when Adena splashed across the line, which made us 44th out of 71 teams and 9th out of the 13 SRR teams, not bad for three people out for a training run.  Maybe it was all the time we saved by eliminating five of the baton exchanges?

SRR teams took first for both men and women, three of the first four places (the Men’s 50+ team was third), and six of the top twelve overall.

After the race, Ruth and I went back to Camp with Ruthanne so I could make up for missing out on the grilled cheese on Friday.  Then  we got in the car and drove through more stormy weather to get home.

This morning, my calves were tight after all the hill running.  I probably wouldn’t have gone for a run if that had been the plan, but biking was fine.