Last night’s run at Casey’s was my first since the marathon.  My legs were still sore, so I took it easy and ran sweep, trotting around the 4 mile course in 45:30.  Ruth was supposed to sweep with me, but she felt too frisky for the slow pace.  Halfway through, she started to pull ahead, chatting all the while with one of the new runners.  Doesn’t seem fair.

Now that Cape Cod is over, it’s time to look back and see what, if anything I learned this time around.  Each marathon is educational in its own way.  Even after 21 of them, I’m still learning new things.  I’m always hoping to learn something that helps, but sometimes learning what doesn’t work is just as useful.

I keep getting older, which is an ongoing source of new problems that need answers. A lot of the answers are common knowledge.  The trick is realizing that they now apply to me. 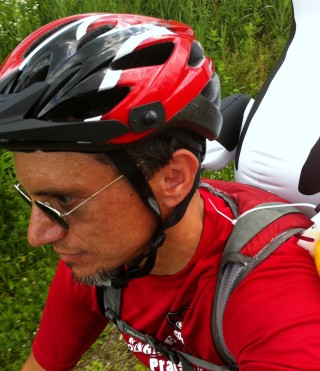 Cross-training on my bike instead of running two days a week was successful in helping me manage my chronic injuries while building a decent base for my marathon.  Biking was particularly helpful in managing my butt pain.  It hasn’t gone away, but it’s much less annoying if I never run two days in a row.

On the other hand, biking brings its own pains.  I still have a lot to learn about riding form if I want to be as efficient as possible and, more importantly, cut back on the discomfort I get from riding, especially the pain in my neck and shoulders.  I have to find out if drop bars will help, or if they’ll cause more pain by forcing me to bend my neck back farther.

The 4 to1 bike-to-run conversion factor I used to track how much I was doing was close enough for my purposes, though I suspect the real rate is closer to 3-1 at the rate I pedal.

My biggest single mistake during training was probably running too hard over 21 miles of hills at Lake Winnie.  Before Winnie, I felt great.  After Winnie, I never felt quite as fresh.  Training was more of a struggle, and I’ll always wonder whether I would have been stronger over the final six miles of Cape Cod if I had run slower at Winnie or avoided beating myself up by running down the hills from the ski area.  Long runs are absolutely necessary, but I need to do them slowly.

It’s hard to run slow enough in a race, and it’s never quite clear exactly where the line between “OK” and “too fast” is until it’s too late.  I did something similar in 2004, when I left my Boston Marathon on the course of the Martha’s Vineyard 20-Miler.  In both cases, if I backed off for a couple weeks afterwards to recover instead of training straight through, I probably would have been fine.  But it’s hard to take that much time off in the middle of training, especially this year when Winnie was only seven weeks before Cape Cod.  I’d probably be better off skipping long races altogether during the buildup to a “serious” marathon.

Track workouts are a necessity if I want to hold on to what’s left of my speed as I get older.  In the past, I’ve gotten hurt by doing too much too soon.  My cardio-vascular system was fit enough let me do more than my body could handle.  Easing into track by starting with only a few intervals and then working my way up slowly from there kept me from getting hurt.

Races are for racing, not training.  I knew I had too many races on my schedule, so I tried to hold back and use them as tempo runs.  I had fun seeing my friends at events, but it always seemed like a waste to pay an entry fee and not do the best I could.

One day of speedwork a week was more than enough.  Even though I wasn’t racing all-out, I found I had to cut back some on my track and hill workouts because of all the races I had on my schedule.  I’m pretty sure I would have been better off in the marathon if I ran more track and fewer races.

I would have felt better about myself if I hadn’t dropped the last few track workouts.  Of course, feeling bad about dropping the workouts was stupid.  I made the right choice to listen to my body and cut back from my original plan.  But I still felt guilt and stress, which was silly.

There’s a common thread that connects these problems.  I still haven’t internalized that doing less is often more in the long run.  And I still use “in the long run” when I write about running, doubly painful because it’s both a cliché and a bad pun.

Blister prevention was a big win.  As long as I followed my routine, I stayed blister-free.  Running is much more fun when I don’t have to run on raw meat.

Adding a forefoot valgus wedge to both of my shoe inserts helped mitigate some of the problems created by my foot structure.  My latest adjustments to my right shoe insert are another win.  The left one still needs more work, but that side has always been more of a problem.  Actual wedges, rather than flat cork shims, seem to work better, though the wedges are wildly overpriced for thin slices of cheap plastic.  I ended up buying $20 BikeFit varus wedges, flipping them so the thick edge is on the outside instead of the inside, and trimming them to fit.

I’m not sure whether the calf compression sleeves helped, but they didn’t hurt.  I didn’t have any problems with my calves in the marathon until mile 26.  That’s still not great, but it’s better than I’ve been doing, so I’m going to stick with the calf panties in the future.

Some smaller things didn’t work, but caused no real harm.  The Natural Calm magnesium supplement left me feeling more tired the next day, not less, so I stopped taking it.  Nike Flex shoes felt fine while I was running, but my legs didn’t feel as good afterwards as they do when I run in Asics GEL-Hyperspeeds.  I blame the mushy Nike midsole.  My Garmin GPS watch provides useful information while I’m running, but all the data I collected while I was training isn’t terribly useful.  If I ran on an air-conditioned indoor track, I could use my heart rate during a workout to tell whether I was in measurably better shape.  But in the real world there are just too many variables to allow meaningful comparisons.

From here, what can I do to run a better marathon?  It boils down to this:

One thought on “CCM Diary: Something I Learned Today”