Ruth and I knew the alarm was going to go off at 4:30 this morning so we went to sleep early last night.  We had to get up so Ruth could get her mom to the airport for her 7AM flight back to Florida.  We might have stayed up to watch more Olympics in spite of the early alarm, but NBC decided double down on their use of tape delay and start the evening program with 70-year old war replays, so we shut off the TV, checked the Men’s 5000 meter results online, and went to bed.

After Ruth got back from the airport we had the Sunday morning crew over to watch the end of the men’s marathon.  I especially enjoyed watching Meb stick to his plan, run his own race, and climb all the way back to fourth place.  He knew he couldn’t go with the lead pack, but he kept at it and gave himself a chance. One more guy melting in the heat and Meb’s on the podium.  If you don’t quit, good things can happen.

After the race, Ruth’s crew went for their run and I went for my ride.  We met up again at the coffee shop and then I went home to watch the last event, the men’s basketball final. 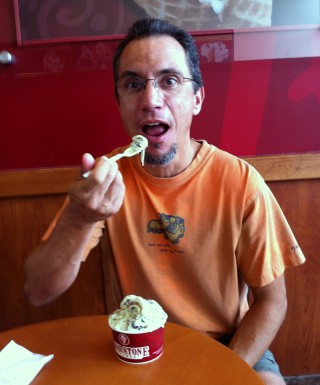 Because of the Olympics, I’ve seen many, many, many more TV commercials than usual lately.  Cold Stone Creamery will be glad to know that their ad worked.  The shots of the Mint Mint Chocolate Chocolate Chip ice cream were just too powerful to resist. I’ll never be as lean as an Olympic runner, but at least I get to eat ice cream.

After ice cream, we stopped by the mall and I ended up buying two pairs of Nike Flex 2012 RN shoes at the Famous Footware store.  They’re like Nike Free knockoffs for the discount shoe store channel, but they look light, flexible, and well cushioned, more like a light version of the Saucony Kinvara than the Nike Free.  And they were buy one, get one half-off, so I indulged my shoe fetish.

I’ll give them a try next week.  Right now, I only have one shoe model that I know I can run in, and that makes me uncomfortable.  The Nike Flex shoes are less than ideal because they’re not likely to be around for long given how they’re sold, but if they work, I’ll find a way to deal with that.

One thought on “CCM Diary: Meb!”