Skip to content
Home » Blog » marathon » Do Women Marathoners Push Themselves As Hard As Men?

(This is the 14th post in a series that started here)

Studies, including a recent one of mine, show that on average, women tend to pace themselves more evenly than men when running marathons.

We know that splits tend to get more positive as runners’ finish times go up and that the average female runner is slower than the average male, so the raw numbers may understate this trend. Using split scores to mitigate the differences in finish times between women and men bears this out.

Since conventional wisdom says runners should strive for even splits in order to run their best marathon, it’s been said that this means that women are better at marathon pacing than men.

It’s also been hypothesized that women don’t push themselves as hard as men, which makes it easier for them to run more even splits, but keeps them from achieving finish times as fast as they might otherwise.

Perhaps a closer look at the data will tell us more.

In two recent posts, I studied 5K splits from the latest Boston, New York, and Chicago marathons. I discovered that as runners’ finish times got faster, their pace, relative to their previous splits, slowed over the last 7K and especially over the last 2K.

I decided to take one of those races (Boston 2014) and break the data down by gender.

This chart shows how the average 5K splits for men and women compare to the overall average. It also compares the splits for the runners with the most even half-marathon splits from each group. 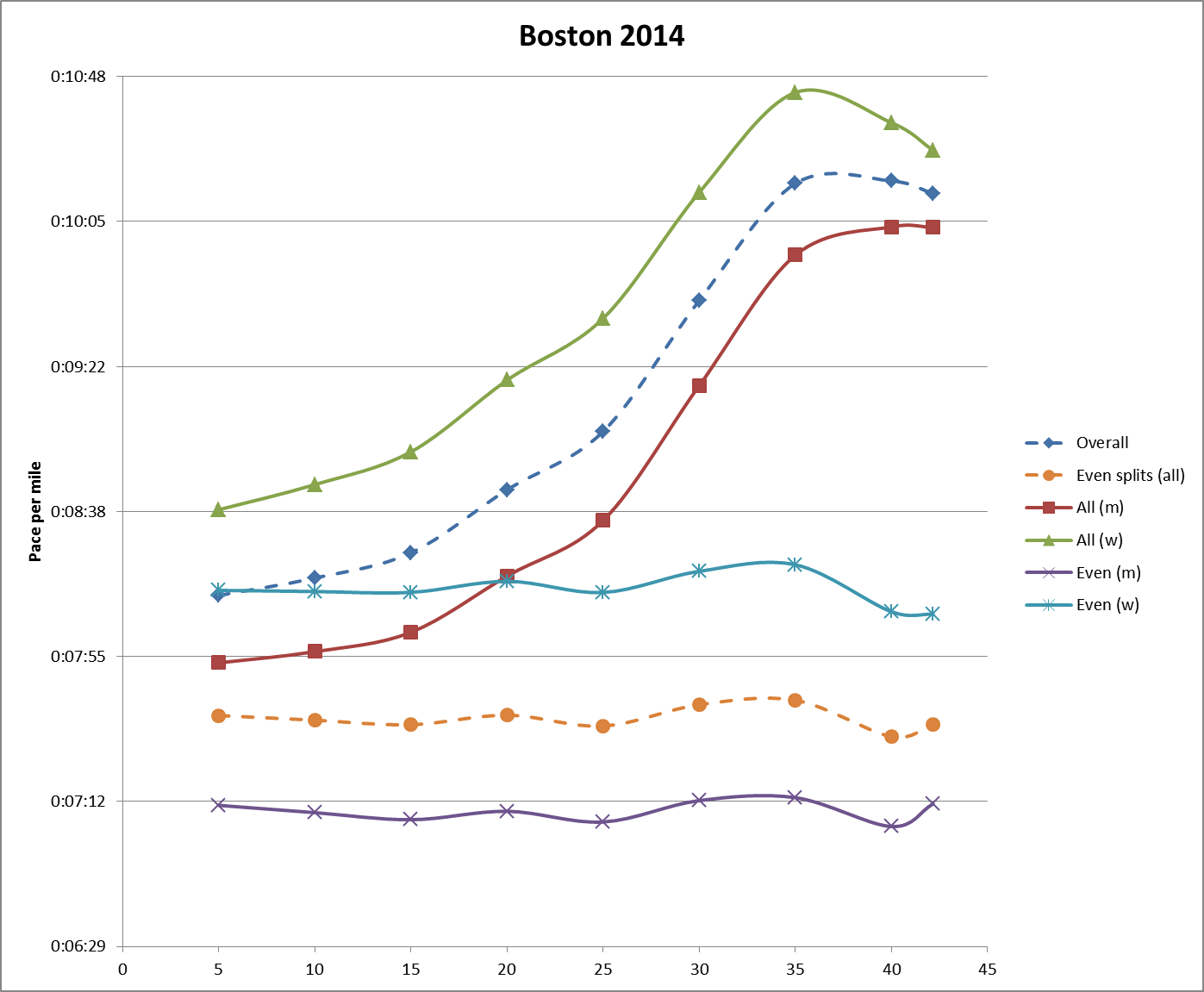 The chart shows that women’s splits at the end of the race are faster, compared to their earlier splits, than men’s. Since the average woman is slower than the average man, we expected that.

By only selecting runners with even splits, the differences between the shape of the lines for women and men were reduced, but the women’s line still trends comparatively faster.

The next chart tries to eliminate the differences due to speed by dividing the average splits for men and women into half-hour groups by finishing time. 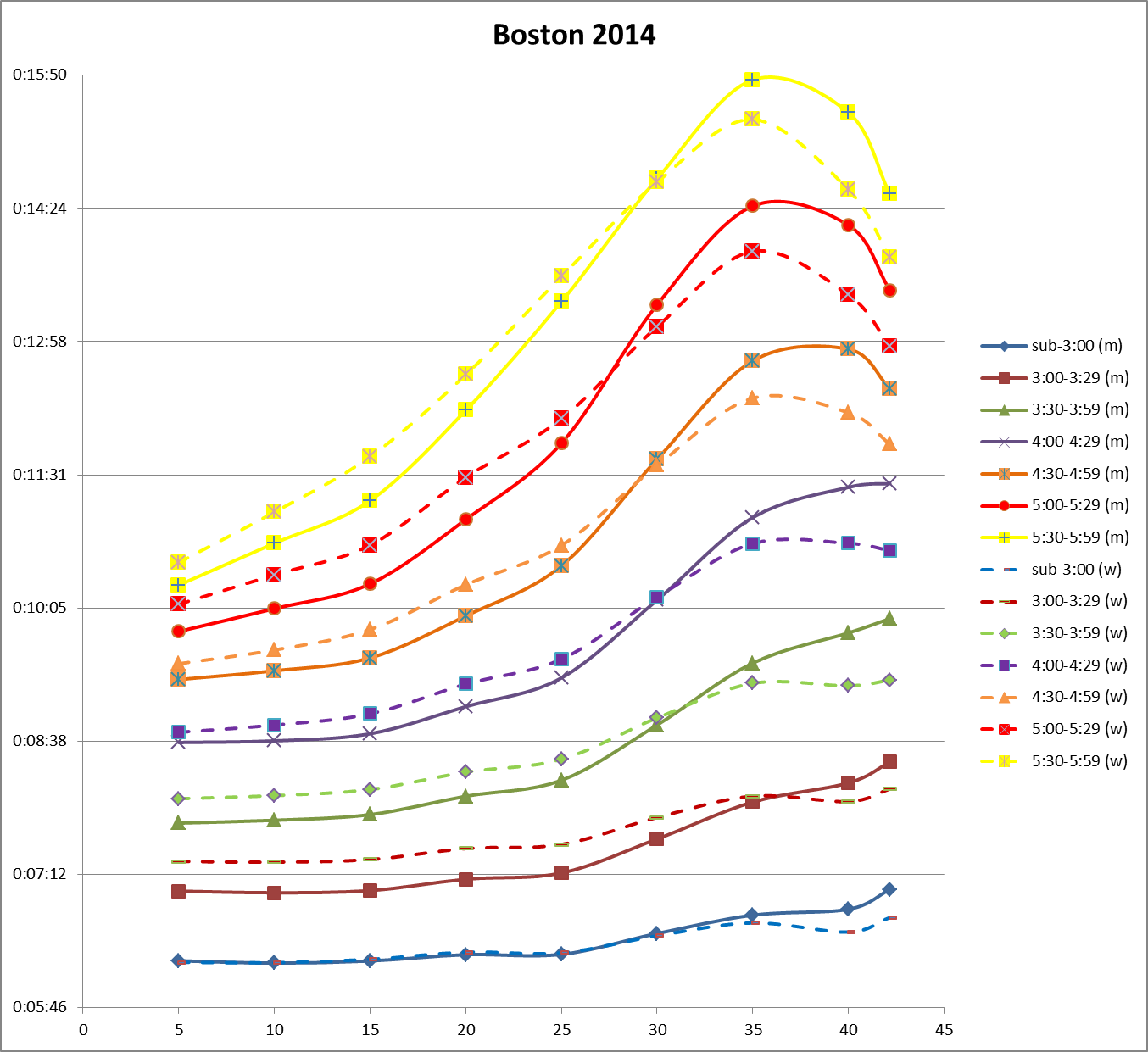 Since men are faster than women on average, by comparing men and women using equal finish times, the women in each group are faster, relative to all other women, then the men are to other men. That means the direct comparison might tend to understate the difference in split trends.

This chart shows that the distribution of finish times for men and women are roughly the same, except that the men’s times run about 20 minutes faster. 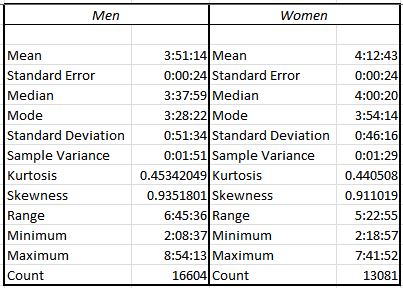 So in this chart, I divided the men up into half-hour groups that are 20 minutes faster that the women’s groups. 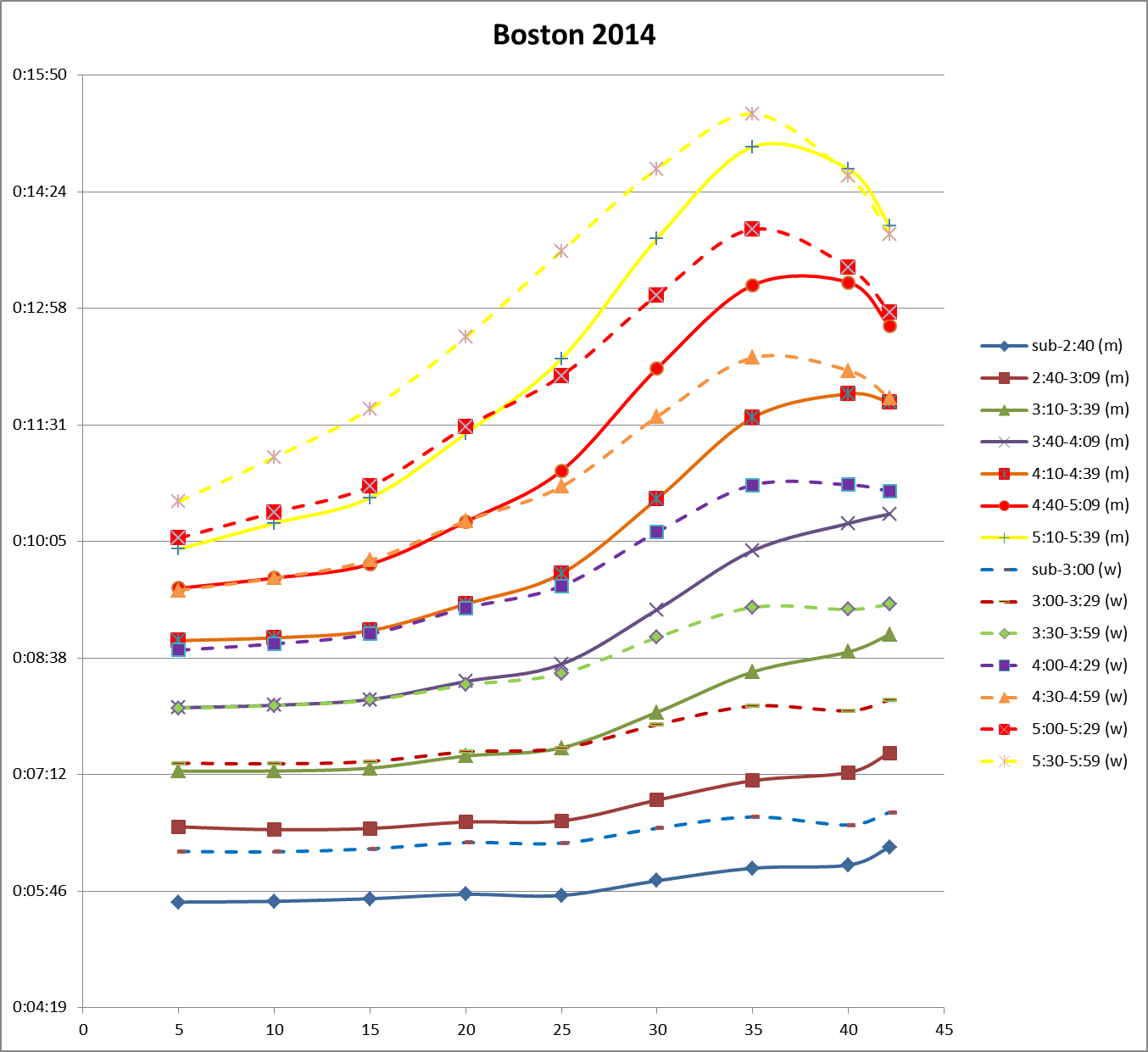 As predicted, this chart makes the difference in split trends between men and women more distinct.

What’s it all mean?

In my original 5K split post, I guessed that slower runners weren’t pushing themselves quite as close to their potential as the faster runners, leaving them with more energy left after the Newton hills to speed up and look good for their finish line photos.

Since women’s splits take on the shape of slower runners when compared to men’s, even when the data is manipulated to minimize the effect of differences in speed, does this mean that women aren’t pushing themselves as hard as men?

If men are pushing themselves harder, does that mean that they’re getting better results than comparable women?

If you disagree, what’s your alternative explanation? Let me know what you think and maybe we can figure out if the data supports it.

We’ll divide up 5K splits by age in my next post.

9 thoughts on “Do Women Marathoners Push Themselves As Hard As Men?”