(This is the 12th post in a series that started here)

When I looked at the 5K splits from the 2014 Boston Marathon, I mostly saw what I expected to see.

I calculated the average 5K splits for the 2014 race both as a whole and broken down into specific groups of runners. This chart shows those 5K splits converted to a minute-per-mile pace: 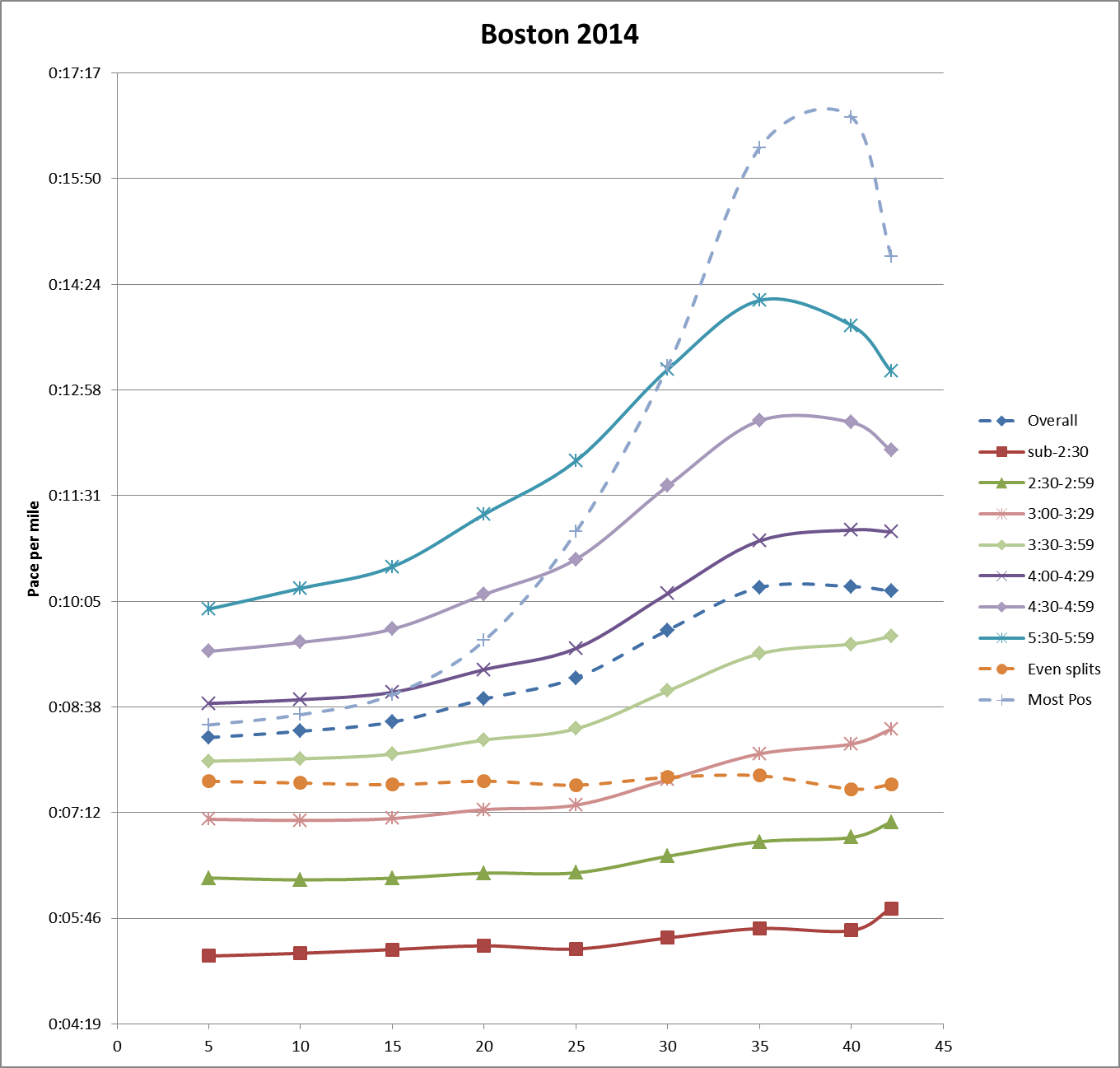 Here’s the elevation map for the Boston course:

The Newton hills start at about 28K and end near the 33K mark. They don’t line up perfectly with the 5K splits so their effect is muted some, but you can still see from the 30K and 35K splits how the hills slow everyone down. Splitting up the data by finish time shows that the hills hit the slower runners harder.

Then comes something I found interesting. Once you get through the hills, the next 7K through Brookline is pretty easy, trending mostly flat or downhill. Overall, the average runner was able to take advantage of the terrain and pick up the pace. Perhaps unsurprisingly, the “Even splits” group did a particularly good job of making up time lost in the hills.

A closer look shows that the overall effect was created by the extreme groups – the very fastest runners in the race and the slowest. The middle of the pack averaged even slower after the hills than they did through Newton, though the course is much easier. Even the runners finishing between 2:30 and 3:00, a pretty fast group, lost ground.

The last 2K was even more surprising to me.

That part of the course has its challenges (the bump over the Mass Pike, the Mass Ave. underpass, and the climb up Hereford St.) but they’re nothing compared to what came earlier in the race. Countering that, almost everyone who runs a marathon gets a burst of energy when their goal finally comes within reach. And at Boston, the thickest packs of spectators start just past the 40K mark, in Kenmore Square. The roar of the crowd is relentless from Kenmore on in.

I expected to see splits dropping across the board. But the trend was clear. As runners’ finish times got faster, their times over the last 2K got slower (not in an absolute sense, but relative to their previous splits). 2:30 runners still finished faster than 5:30 runners, but the 2:30 runners slowed down while the 5:30 runners sped up. The fastest runners were dramatically (for them) slower over the last 2K.

Even the “Even splits” group lost ground after 40K, while the “Most positive” group made up more than anyone.

Maybe there’s an element of “oh well, I’m not winning” in the sub-2:20 group, but that doesn’t apply to the 3:30 marathoners, and they still slowed down. 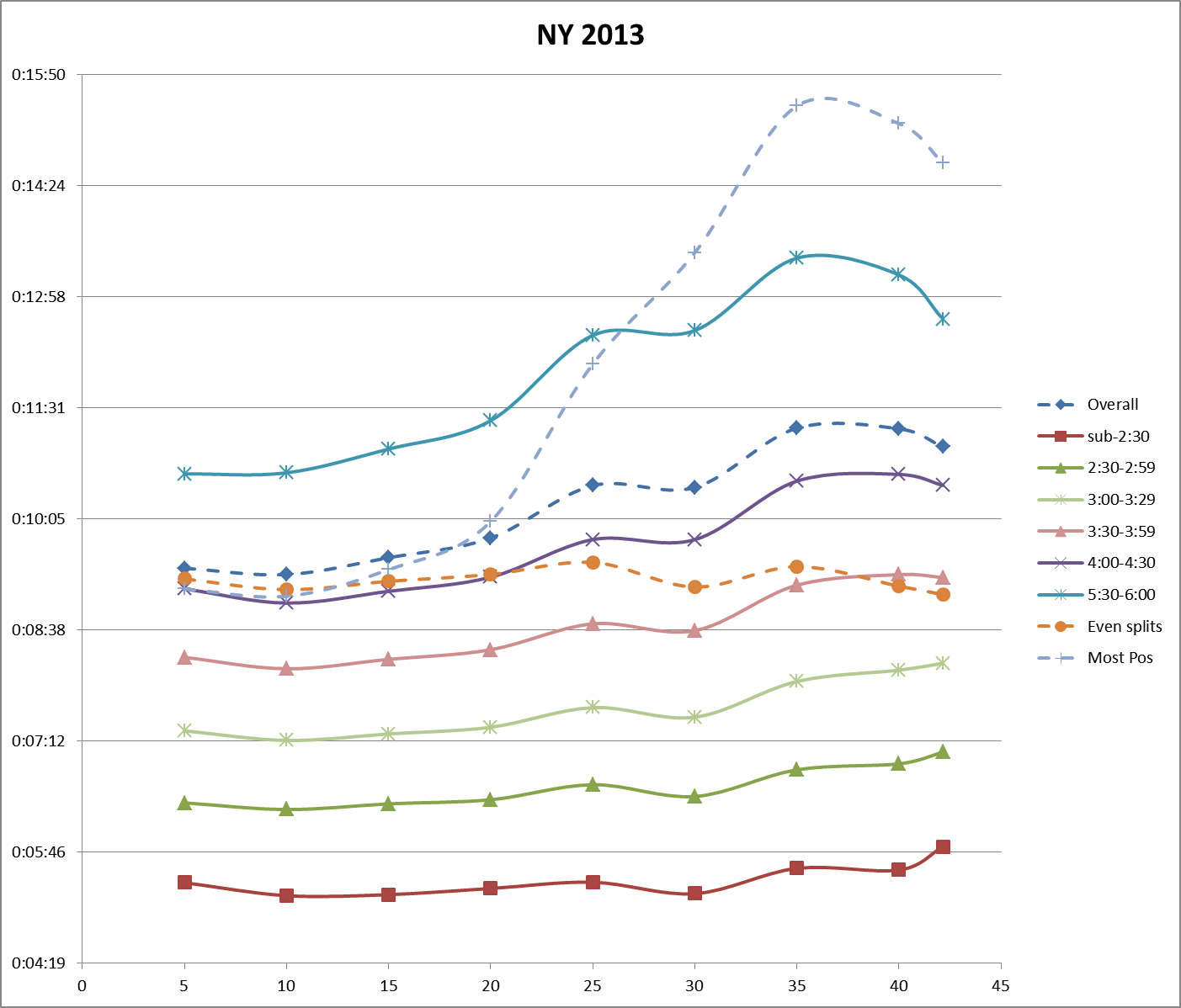 though the elevation profile is different:

To run your fastest race, you want to “leave it all out on the course”. If you have the energy to pick up the pace as you approach the finish, you probably could have run faster earlier on and ended up with a better finish time.

But there’s a fine line between running your best race and going out too fast. As we know, most runners run positive splits. Marathoning is hard.

The 5K charts show that in general, slower runners drop off from their initial pace sooner than faster runners.

For the slowest runners, part of the drop may be because, on average, they aren’t pushing themselves quite as close to their potential as the faster runners. That does leave the slower runners with more energy left after the Newton hills to speed up and look good for their finish line photos.

Mid-packers don’t give in as easily, holding on to their initial pace farther into the race. Actually, mid-packers might be better served by taking it a little easier from the start; on average, they’re not able to take advantage of the easier terrain after the hills.

Even the fastest runners have difficulty getting the first 40K just right, so they’re tired, but not too tired, for the last 2K. Apparently the best runners believe that if you’re going to make a mistake in pacing, it’s best to err slightly on the optimistic side and risk running out of gas a little early, just as long as you don’t get too sanguine in the early miles.

It sounds funny to say that the fastest runners “went out too fast” over the first 40K, but I think that’s what’s happening.

Does this hint at a pacing strategy more effective than pure “even pacing”? I developed this idea further on Medium: https://medium.com/@rcharbonxx/pushing-the-curve-a51ad2f76691

5 thoughts on “5K Split Distribution at the 2014 Boston Marathon”