Skip to content
Home » Blog » writing » Marshall, Ben, and I

The week before the Boston marathon, books by two of my virtual friends, Marshall Ulrich and Ben Tanzer, went on sale.  I feel a kinship with Marshall and Ben, since we’re all runners and writers, though with wildly varying levels of success, so I was looking forward to reading both of their books.

There was an element of dread involved.   I’m somewhat famous in my circle of acquaintances for my lack of tact.  If someone asks me what I think about their work, I’m arrogant enough to believe my opinion has value and that they’ll actually want to hear it, whether or not it’s positive.  Apparently I’m constitutionally incapable giving someone a diplomatic attaboy.  I’m even harder on myself, but that doesn’t help.

So sometimes, when I’m about to read something by someone I know, I’m afraid I won’t like it and I’ll end up either disappointing the author with my comments or embarrassing us both with some sort of stammering, uncomfortable evasion.  Luckily, that wasn’t the case with either of these books.

First, I read Marshall Ulrich’s “Running on Empty: An Ultramarathoner’s Story of Love, Loss, and a Record-Setting Run Across America

“.  Marshall is one of America’s finest, yet least known, extreme endurance athletes.  If you Google him, you’ll find a list of accomplishments so long and varied that it will be hard to believe.  But Marshall hasn’t been one for self-promotion, so until recently he may be best known for having all his toenails permanently removed, rather than for anything else he’s done.

I first had contact with Marshall in 2004, when I was soliciting donations before my first attempt at the Vermont 100.  He was kind enough to donate some money, and I was impressed that such a legendary figure would help out someone he didn’t know solely on the basis of a message to an ultrarunning mailing list.

Then Marshall was involved in a movie, “Running America

”, based on his 52-day run across the country at the age of 57 in 2008.  When the movie came out in 2010, I was disappointed.  There were some interesting scenes, but in the end it was a superficial look at what I knew must have been an amazing, intense effort.

By this time I was following Marshall on Facebook.  When he asked what people thought about the movie, I told him about some areas where I thought it could have been better.  I received a pleasant reply, and we had a short exchange of messages, much nicer than any I probably would have had with someone critical of my work.

Then I wrote my own book.  Marshall was one of the many I asked to review it in advance, and one of the few who responded.  I’ve made heavy use of his quotes to promote the book, and I give him a large amount of credit for whatever success I’ve had in getting people to read it.

So last November, when I heard that Marshall was coming out with a book about his cross-country run, I pre-ordered it on Amazon.  It finally arrived during the weekend of the Boston Marathon expo.  Since Marshall was at the expo to promote his book, I got to meet him in real life, and I was not disappointed.  He was happy to sign my book, and I found him gracious and very pleasant to talk to.

When I sat down to read his book, I found “Running on Empty

” to be just about everything I wanted the movie to be.

Marshall goes into great detail about the challenges he faced during the run and how he overcame them. I got a much better picture of who he was, why he’d try such a thing, what he went through, and how everyone involved felt about the whole thing. Marshall shares the special moments during the trip and the exhilaration he felt when he finished, but he’s not shy about discussing the downside of his dedication to complete his goals and the toll it takes on those around him.

Along the way, Marshall touches on a number of the same themes I cover in my book, though I’m certainly flattering myself by making that comparison.  He also discusses some issues that help explain why the movie came out the way it did.

Marshall doesn’t make himself out to be the greatest thing since sliced bread just because he’s a superior athlete.  If anything, his straightforward writing style tends to downplay the nature of his accomplishments.  He’s definitely a runner who writes, not a writer who runs (unlike Christopher McDougall, who’s “Born to Run” has broken out to find an audience among non-runners), but his honest and matter-of-fact writing style goes over well.

I raced through Marshall’s book in two days.  Then I started the second book, Ben Tanzer’s “You Can Make Him Like You 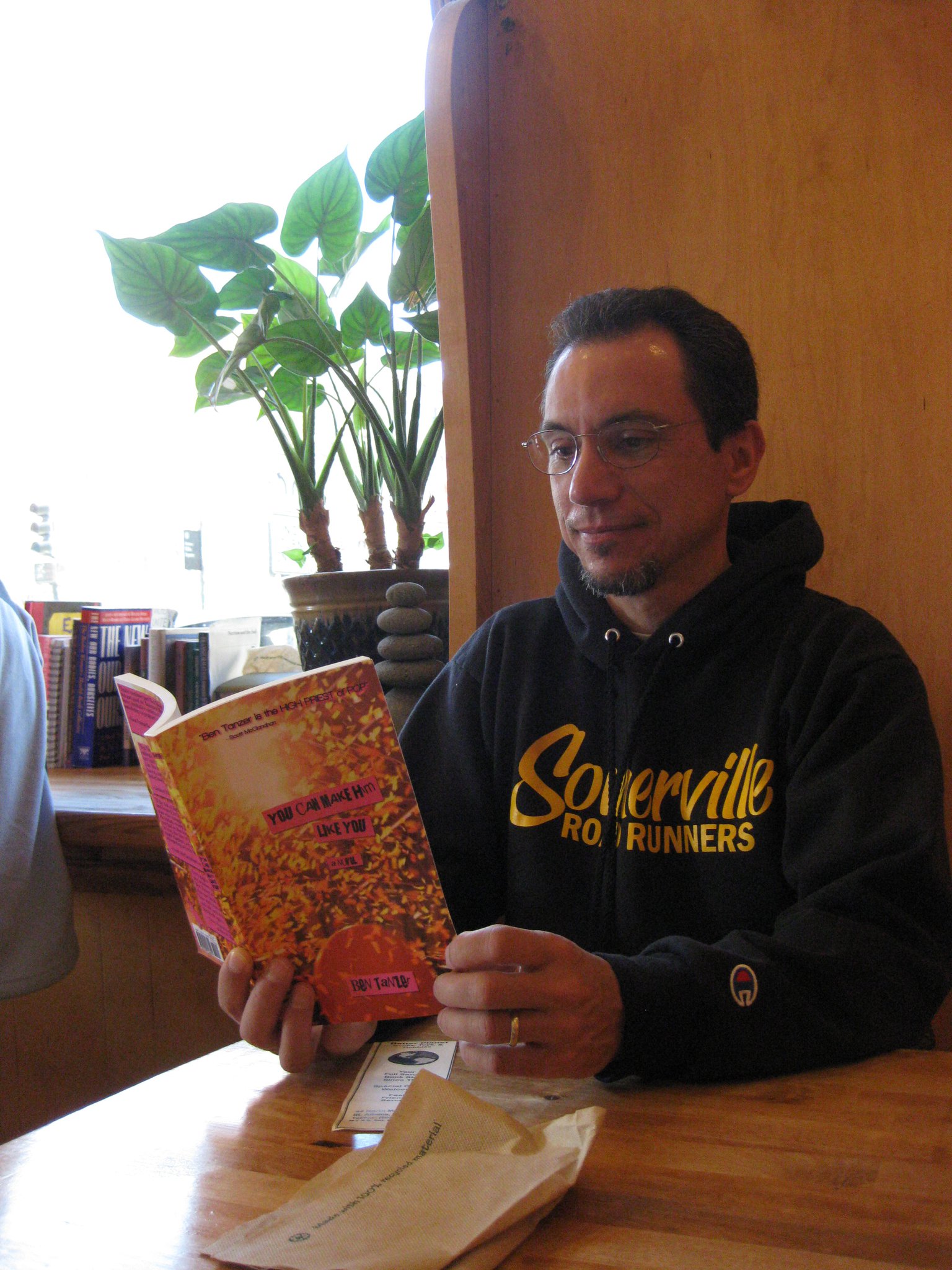 Ben and I became Facebook friends.  I’ve probably paid more attention to his posts than he pays to mine, partly because his posts have served as an introduction to the world of small press publishing, and partly because Ben has a job and small children in addition to running and writing, so I have more time to waste online.

When I followed up on an opportunity mentioned in one of Ben’s posts, that led to my first short story acceptance.  I wouldn’t mind if I followed a path similar to Ben’s to get more of my work published.  Of course I’d like to be able to run like Marshall too.  It doesn’t minimize Ben’s accomplishments any to say that they represent a more attainable goal.

So when Ben announced his new book, I looked forward to reading it.  I was all set to pre-order my copy when I entered a contest to name the logo for Ben’s publisher, Artistically Declined Press.  I won, and the prize was a copy of “You Can Make Him Like You

Ben’s book is a modern spin take on the old “coming of age” story, skewed for the extended adolescence that seems so common these days. You could call it a “finally coming of age” story. It’s fun, and funny, and stuffed with pop culture references so it moves right along, but at the same time, you get to know Keith and sympathize with his struggles, so the book is more than a fluffy bit of amusement.  Once I picked it up, I kept reading, finishing it the day after I started.

The character of Keith is at his core so raw and true that through Keith, I feel like I’ve gotten to know Ben better than I did before.  Of course, it’s often a mistake to assume that a character is a reflection of the author, so I’m sure I think I know Ben better than I really do.  So I may be wrong when I assume that Keith was written as a McCain supporter to create some separation between him and Ben.  Either way, I’ll forgive Ben for Keith’s Hold Steady obsession.

I read a lot, and I’m always happy let people know what I read and whether or not I like it.  I don’t really try to be a “book reviewer” and I’m certainly not a “critic”.  I just know what I like, and sometimes I even have some idea as to why.

For “Running on Empty

”, I don’t claim to be impartial.  These are books by people I like, about subjects I like, so I was predisposed to like them.  I’m happy that I wasn’t disappointed.  Now I can be comfortable if Marshall or Ben ask what I think, and I can encourage you to go out and try their books for yourself.