I stumbled across Ben Tanzier’s new book, “99 Problems: essays about running and life“, while I was searching for websites that might be interested in my new book, “Chasing the Runner’s High”.  Ben’s book is a series of essays written after some of his daily runs during the winter of 2009.  The stories mix details of Ben’s runs with his thoughts on his writing projects and his life generated during those runs. 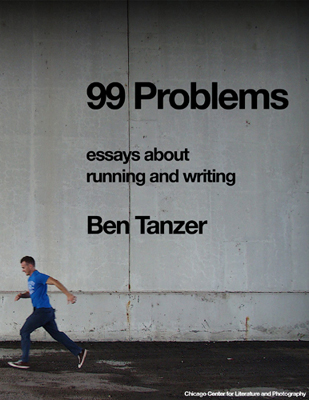 Ben and I are both runners and writers in our 40s.  I figured I’d relate to what he had to say, so I downloaded the book to my iPhone.  The ePub version was 199 pages long on my tiny iPhone screen (equivalent to maybe 50 pages when formatted for a typical paperback).  I was able to finish it in an afternoon of reading, but I read faster than I run.

It’s clear from the book that Ben understands what it means to be a runner.  You’re a runner if you need to run, if running satisfies something inside you the way nothing else does.  Running faster or further is nice, but not necessary.

I really like when Ben’s writing about running.  He explains his obsession in a way that’s very personal, but easy for other runners to relate to.  “Why is running so important to me? The cliché response is, “Why is breathing important?” Because it simply is, and as soon as you get a taste of it you want more. Just like drugs or sex. Or Pringles. (…) And what I eventually learned was that when the drugs are no longer anything but another hurdle to getting real stuff done; when you don’t actually want to have sex all the time, or at least put in all that effort to have it all the time; when the Pringles, if you are honest, leave you sort of queasy, and laying on the couch breathing heavily; there is running.”

Even when they’re not competitive, all obsessive runners find some way to be elitest about what they do.  Running is so right, that it’s hard to understand why anyone chooses alternatives.  Ben lives in Chicago, where it is often cold and windy, but “I run, year-round and outdoors. I could tell you that I don’t look down on people hitting the treadmill this time of year, but I would be lying. That’s not running; that’s exercise. It’s healthy and beneficial, but it’s not running.”

Sometimes Ben goes a little overboard.  After flying home sick, he went out for a run, tired and achy, and then wrote, “This could be unbearable; but the thing is, just like sex, running under duress is still better than not running.”  I suspect he didn’t really mean to equate running with rape.  He also compares the lack of literary running books with the lack of positive gay role models in media.  These comparisons illustrate that running might mean a little too much to Ben.  I can relate.

The book isn’t as strong when Ben is tying his running to his writing.  Sometimes it works, like when Ben decides to push himself to extend his writing range on a project while pushing himself to run faster on his regular loop, or when he gets in an extra long run with no problems, in part because he’s distracted from worries by working out a plot.  Other times, the link to writing is forced, or almost non-existent.

The title of the book comes from a Jay-Z song, where Jay-Z has his problems, but not with women.  Running is Ben’s “bitch”.  If you agree with Ben that, “I can eat later. I can sleep later. I can drink coffee later. But there’s no guarantee that I will be able to run later. Shit happens. I’m gone,” then this book is for you.

One thought on “Book review: 99 Problems”