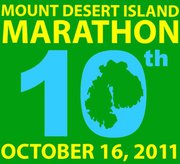 Ruth and I will be running the Mount Desert Island Marathon on October 16th.  Our friend Ruthanne will be there too, running her first marathon.

The MDI Marathon consistently appears on lists of “Best Destination Marathons” and “Most Scenic Marathons”.  Runners pass lakes, quaint village centers, high ocean bluffs, the mountains of Acadia National Park, and the only fjord in the Eastern United States, all during the peak of fall foliage season.

It’s not an easy course.  We saw most of it when we ran the July 4th Around MDI Relay in 2009.  It’s hilly, and though there’s a fast downhill finish, that’s only because there’s a five mile climb to get you to mile 25.  The race director says “marathon running is supposed to be a challenge and that hilly courses are usually the most satisfying”, and he wants everyone to be throughly satisfied by the time they finish.

Hope to see you there!