This spring I came up with two possible goals for the year: win my age group at the Lake Tahoe Marathon or qualify for the 2018 Boston Marathon.

On the one hand, there are very few marathons where I can even fantasize about being competitive. Tahoe’s location and the difficult course keep the field size down, yet they still have 5 year age groups, making placing more likely, and Ruth and I did have a free place to stay. On the other hand, we live in Massachusetts and it’s always something of a drag when April rolls around and everyone else is running Boston. I’d had fun in 2016 helping celebrate the 50th anniversary of Bobbi Gibb’s run, and 2018 would be the 50th anniversary of Amby Burfoot’s win. And I was turning 55 and getting an extra 10 minutes on my (maybe)BQ time.

I couldn’t decide which one I wanted more.

So on the third hand, why not try to do both?

That would mean running well in two fall marathons. Speedy recovery after a race is not one of my better skills. For me to think about winning anything at any race is audacious, as is the idea that running a BQ would ever be ‘easy’. And as we all know, the gods are often swift to punish hubris.

But what the hell. Nothing ventured, nothing gained.

After two weeks off in April due to yet another calf injury, I made a couple of changes to try and stay healthier.

While I was out, I discovered that HOKA had finally made a shoe wide enough for me to run in, the Clayton. When I started running again, I found that the extra cushioning, soft but not as mushy as some other shoes, worked well for me. Not only did I like running in the Claytons, but I found I could get over 300 miles out of a pair, instead of the 100-150 I got from most shoes.

I also started taking an extra day off every week, cutting back from five to four days a week. I did that by putting the bike away for the summer to focus on running. This meant I’d rack up fewer miles, but if it helped me avoid any injury timeouts, it’d be worth it.

You never know how much any changes matter, but I did make it through the summer injury-free.

While I was training, I looked for a likely late-fall/early-winter marathon to follow Tahoe. Our friend Ruthanne strongly recommended the Rehoboth Beach Marathon in Delaware. The course there is flat and fast, the weather is usually cool, we could get a hotel on the same block as the start and only about a quarter mile from the finish, and there were almost eight weeks between Tahoe and Rehoboth. Ruthanne was planning on going back for a third try and there was a half-marathon that Ruth could run.  So I signed up and we bought plane tickets and reserved a room. (Unfortunately, injuries kept both Ruth and Ruthanne from running)

In early October, I went to Tahoe and ran hard, though not all-out since I knew I had another race coming up. I wasn’t sure how the elevation would affect my time, but I was happy with my effort. I ended up with a 3:57, which was 10 minutes faster than last year’s winning time.

Luck was on my side. My time was good enough to win the 55-59 age group by 5 minutes. Since three 50-54 guys (and for that matter, one 60+ guy) beat me, with 10-year age groups I would have been out of the money. Let that be a lesson – choose your races carefully! 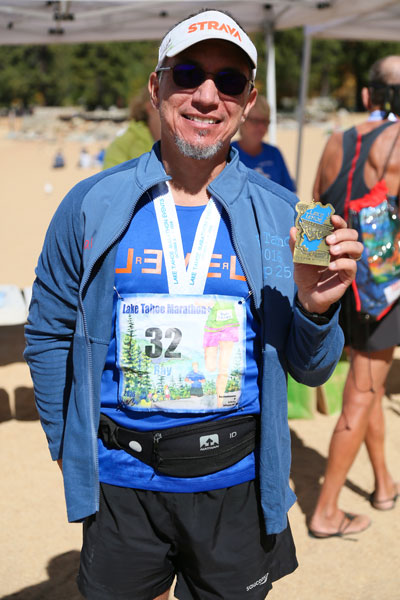 Now it was time to get ready for Rehoboth. I wanted to shoot for 8 minute miles there, which would give me a BQ-10. I’d run an 8 minute pace for 11 miles in 85 degree heat at the Kelley race in August, so it seemed like a reasonable goal. Even if I dropped off the pace some, averaging 8:12’s would give me a BQ-5, which should get me in to Boston with room to spare.

The plan was to take it easy for three weeks after Tahoe to recover, sharpen up with a couple long runs and some speedwork over the following three weeks, taper for my usual two weeks, and then run Rehoboth.

That turned out to be a bit optimistic. The 18 mile run at the end of the third week was harder than I had hoped. Then when I went to the track for some Yasso 800s, I pulled up after the fourth one with a sore right hip/butt. Rather than try and push through, I limped home.

These events called for a change in plans. I kept up with the mileage for two more weeks, but I cut out all the speedwork and added regular walk intervals to my last long run. Then I started my taper a week earlier, which meant 50% more taper madness.

The main benefit for me of those last few weeks of training isn’t any improvement in my fitness. It’s that hard training helps keep my attention on what I’m doing at the time, and away from obsessing about the upcoming marathon. Backing off early meant that by the time the first race-day weather reports came out, I was already a ball of stress.

The good news there was that race day was supposed to be sunny (clouds might be better for racing, but everyone’s happier on a sunny day) with temps in the 30’s at the start rising to near 50 by the time I should be finishing. That was ideal.

The problem was that there were also supposed to be 15-25MPH winds, meaning wind chills in the 20’s and a good chance of strong headwinds one way or another on the two long out-and-back stretches of the course. So deciding on proper race attire was yet another stressor.

Even after 20-some odd marathons it’s still hard to separate real problems from ones caused by anxiety. By now I was worrying about the weather, the pain in the hip, plus sciatic-like pain on both sides (whether from my bad disk, piriformis syndrome, or whatever), a sore right hamstring from Tahoe, a sore attachment behind my left knee that popped while doing bridges on the exercise ball, a persistent sore throat, and a bad case of “maybe I’m trying to do too much-itis”.

All the time I saved by running less during taper was taken up by extra foam rolling, stretching, and nervous pacing about, trying to keep from falling apart totally before  I got to the starting line.

Finally, race weekend arrived. Friday, Ruth and I flew to Philadelphia, then drove two hours to get to Rehoboth. We got lunch, picked up my race packet and shirts for Ruthanne and a friend of hers, walked along the beach some, and settled down to wait for morning.

The alarm went off at 4:45 Saturday morning. I did dome last-minute dithering over what to wear, got highly caffeinated, and headed out for the 7am start with the sun rising over the ocean behind us. 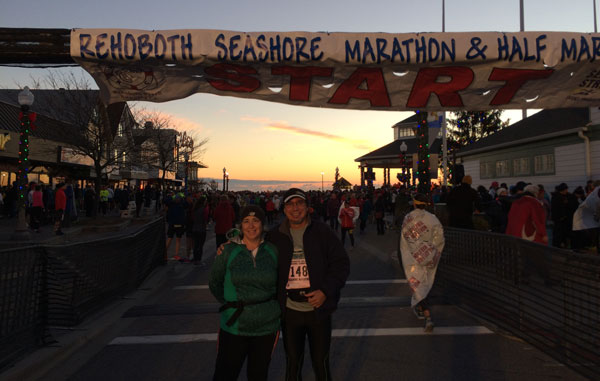 It’s always a relief when there’s nothing left to do but run. That cuts way down on the number of things I need to worry about.

The secret, such as it is, to running a good marathon is to know the proper level of effort that will get you through the race as fast as possible without going out too fast and falling apart before the end. It’s a simple idea, but experience is the only way to learn what level of effort is right for you.

After 26 marathons, I had that experience. So when the gun went off and my first three miles were all in the 7:45-7:55 range without an inordinate amount of effort, my worst fears were assuaged. I was able to relax, settle down, and get to work.

The Rehoboth course is a scenic mix of road and smooth packed dirt, with two main out-and-backs running along the ocean and through parks. It’s incredibly flat:

which meant that once I hit my stride, I could just keep cranking out miles at the same pace without breaking stride, except for short pauses every couple of miles to walk through the water stops. 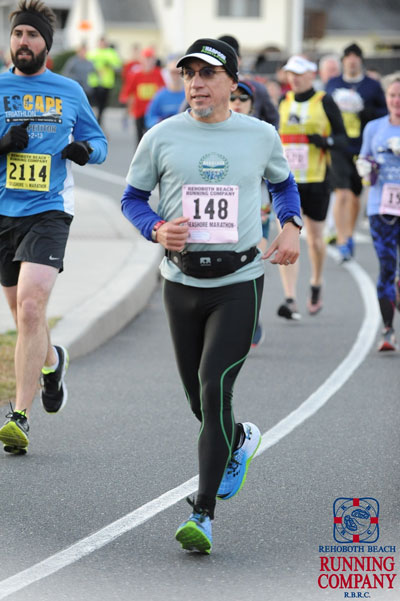 At 16 miles I was still right on track. My head was focused on the task at hand, miles were ticking by just the way I wanted, and I knew that barring disaster, I would get that BQ-5. The only problem was the wind. I tried, but I couldn’t find anyone running at my pace who wanted share the work.

At this point, like always, the race started to get harder. I had a choice to make. I could have ramped up the effort to try to stay sub-8, but I decided to be content with my likely BQ, keep the effort level and the injury risk lower, and let the pace go a little.

Mile 18 brought me back into town where Ruth was waiting to cheer me through, and then it was back out into the wind. Somewhere around here I finally found someone (post-race I figured out it was Sadie Smith) running at the right pace. I tucked in behind her and drafted off of her for the next few miles. Not very gallant of me perhaps, but she was wearing headphones which made it hard to communicate (that’s my story, and I’m sticking with it).

At the mile 23 water stop I pulled ahead of Sadie and found a slightly faster guy to run with, but soon afterward he pulled aside to take a picture and I was on my own. By this point the wind was behind me, the finish was, metaphorically if not actually, in sight, and I felt good, so I picked up the pace a little bit more.

I was cruising along when my watch beeped for the mile 24 split. I couldn’t be sure, what with chip time differentials, my watch splits not quite matching up with the mile markers, and the fact that math gets hard at the end of a marathon, but I got to wondering whether a fast finish might still get me that BQ-10.

I dropped back under 8’s for the last two miles, then (according to my watch) to a 7:38 pace for the last .35 miles, but some twinges in my calf reminded me that an all-out sprint to the finish maybe wasn’t the best idea. 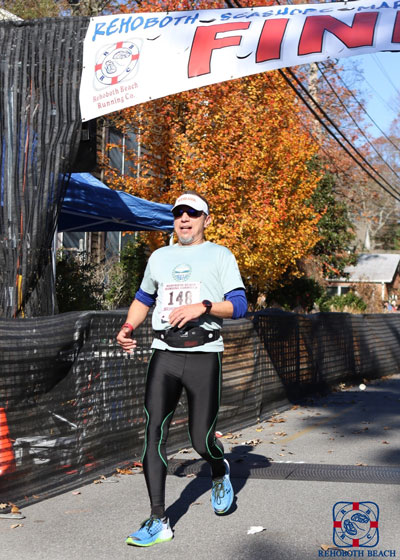 I missed the BQ-10 by 18 seconds, but I did run fast enough to ensure my ticket to Boston in 2018, and fast enough to get back to the hotel, shower, get some lunch with Ruth, and still have time to help close out the post-race party. 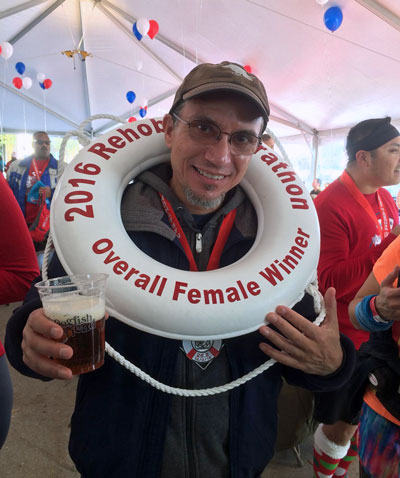 The best races are sponsored by craft breweries.

There’s nothing better than accomplishing a challenging goal after preparing with months (or years) of hard work. That’s why I run. It’s an addictive feeling, and I got to feel it twice this year. Now it’s time to relax, recover, and Eat All the Foods!

If you made it this far, you might also enjoy reading the books you’ll find by following this link.

“The range of your thinking and writing projects is impressive.”