What with one thing (injuries) or another (more injuries), it’s been more than two years since Ruth and I ran our last marathon, Vermont City in 2014. Since then Ruth has had meniscus surgery on both knees and I’ve had my usual assortment of foot and calf problems, exacerbated by the wear and tear from getting older.

A couple of things got me thinking about marathons again:

So I signed up for a half marathon in May and started thinking about training for a qualifier in the fall. By April, I was up to 22 miles for my long run and I’d started to work in some speed training when my left calf seized up again. I’ve learned (painfully) that with this particular injury I need at least two weeks of no running, no matter how good the calf might feel before then. I took the time off, and by the time I could ease back into running it was too late. I was able to run the half, but with the interruption it became a training run instead of a race. 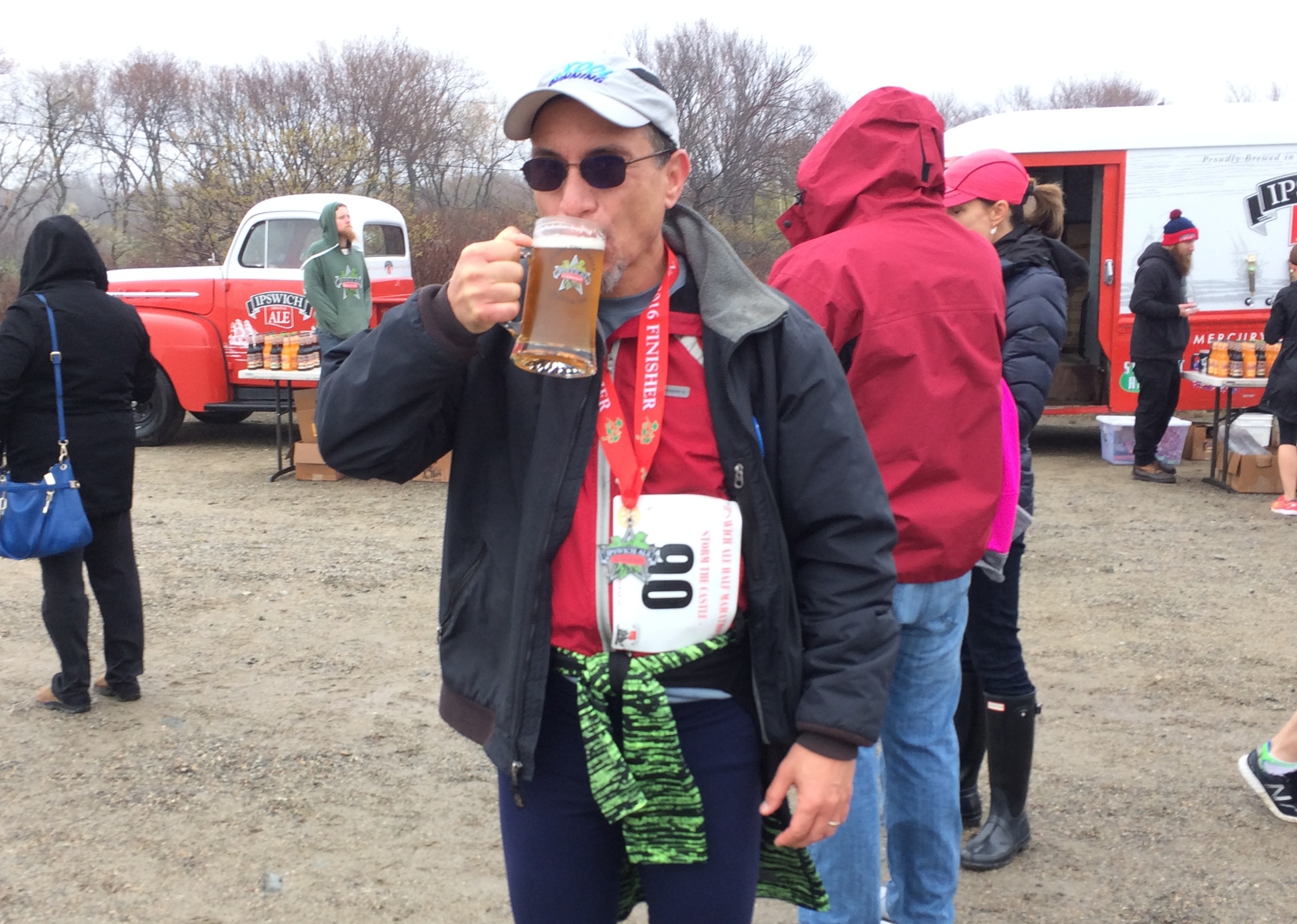 At the finish. The best races are sponsored by breweries.

No big deal. It wasn’t a huge race, with fewer than 400 finishers, but there were still three guys in my age group who finished faster than my half marathon PR, so I had no chance of placing even if my training had gone well.

While I was out, I found that Hoka had finally came out with a shoe (the Clayton) that’s wide enough for me to wear. I started running in them after the injury and wore them for the half. The initial results give me hope that maybe the shoes will help (much more on the Clayton another time).

While all that was going on, Ruth’s mom moved from Florida to California, to live near Ruth’s sister Julie. We decided to go west for our vacation this year so we could fit in a visit to Jane in her new home. When one of Ruth’s co-workers heard this, she told Ruth that she wouldn’t be using a week of her time-share at Lake Tahoe and we could use it if we wanted.

I remembered that Tahoe had a running festival with a marathon and an ultra. I went to their website and found that the festival was in early October. Since I last looked, it had grown to four days of running, including half-marathons, 5 and 10Ks, and even boat and bike races, so even if we couldn’t run the marathon for some reason (<cough> injuries <cough>), there would be other options.

When Ruth asked, the condo was available that weekend. We booked it, and the vacation plan was complete!

The Tahoe ultramarathon follows a 72 mile course circling Lake Tahoe. You can run one on each of the four days of the festival if you want—the days where that might have been a possibility for me are long gone, but if we have fun this year I like to think that coming back another year to run one loop is still an option.

Then there are three marathons, the Lakeside, the Cal-Nevada, and the Lake Tahoe, on Friday, Saturday, and Sunday. All of them together complete a circuit of the lake, and that triple marathon is yet another available option.

Personally, I’d rather race one marathon than cruise through three. Sunday’s race, the Lake Tahoe Marathon, is the biggest of the three. It’s not an easy course. There’s a big climb in the middle where the course goes away from the main lake to circle Emerald Bay, one that dwarfs the climb in Newton that’s on the Boston Marathon course.

Here are the elevation maps for the two courses:

It doesn’t really look like a BQ course. If the climb doesn’t kill me, the steep downhills probably will. But I figured I could always run Tahoe as a training run and then find another race later in the year on an easier course to try for a BQ.

I looked at the results for Tahoe from 2015. There were 184 finishers, not many but enough so that there should be someone within sight for me to chase the whole race. Then I noticed that even though there weren’t many runners, the results were broken up into 5-year age groups and the awards went three deep. I saw that the person who won my new age group finished in 4:07—and even if he came back, he’s aged out of the group.

When I saw that, dreams of actually winning a marathon (OK, winning my age group) began to dance in my head. A 4:07? Easy! My last two marathons were 3:40-somethings, and I wasn’t in shape to race either one.

Now I had to decide, would I rather win or BQ? Not that either was a given, of course.

I figured I could race Tahoe, and if necessary put off the BQ attempt until spring to give me extra time to recover. I always prefer training through summer to run a cool, fall race over training through snow to race on a potentially warm spring day, but you have to make some choices.

But is a 4:07 really ‘easy’? The maps above left out an important factor. Here’s the real elevation map for Tahoe versus Boston: 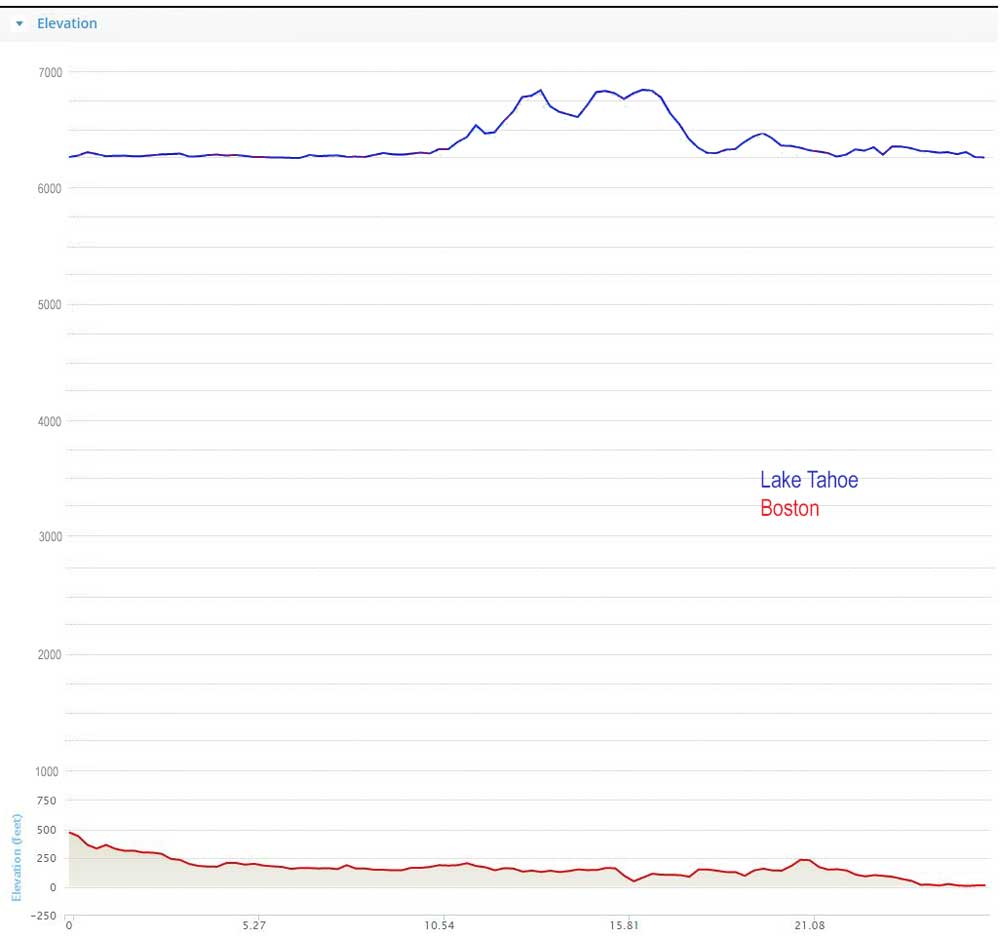 Keep in mind that the elevation in the Boston suburb where I live is about 46 feet. So there’s that to consider, too.

But let’s not kid ourselves. By now I know me. If I can put in the training, I’ll be racing Tahoe.

We haven’t actually registered for any of the races yet. Since there are plenty of options, both Ruth and I will wait and see how training goes before committing to a distance. But whatever happens, we’ll be OK as long as we can run something that weekend. Watching everyone else run when we can’t wouldn’t make for a happy vacation.

There’s still a lot to overcome. I have to drop the weight I picked up riding my bike to coffee shops for muffins while injured. I have to put in a lot of hill training, which will put a lot of stress on my weakest points – my plantar fascia and calves. I have to deal with the negatives of the Hokas (still looking for the perfect miracle shoe). And I have to keep my ego in check and remember that I’m not as young as I used to be.

But I have a goal again. And that is a good thing.