Sunday morning, the final day of four in the Lake Tahoe Marathon/Run Lake Tahoe race festival, dawned with temperatures in the 30’s. Well, “dawn” isn’t exactly the right word – we set the alarm for 4am and it was still dark when Ruth dropped me off at the South Tahoe Transit Center to board the bus to the start of the marathon, before heading back to chill for a bit before the start of her 10K.

When we first signed up for the race, Ruth was thinking about the half-marathon, but she wasn’t sure if she’d be ready after her knee surgery and ankle problems. She kept up with walking and weight training, and she finally got back to running less than three weeks before race day. Since she was going to be in Tahoe anyhow, Ruth signed up for the 10K. The 6.2 miles would be the farthest she’d run in a few years.

Both of our races started at 8am. In hers, Ruth went out comfortably, ran steadily, and finished strong in 1:13:08, 85th overall. On top of that, she took first place in her age group! 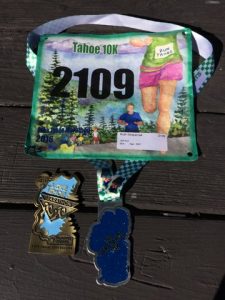 Meanwhile, about 26 miles away, it was time to start the marathon. Last year’s winner in my age group ran 4:07, so when I signed up, I had hopes of placing well. But after driving the course and seeing the hills, walking around huffing in the thin air, and given the predicted 35 degree rise in temperatures during the race and whatever it is here at Tahoe I’m allergic to, I decided I’d be happy with a 4:30 or so.

I ran the first 8 miles comfortably at a marathon-pace effort, which turned out to be under 9 min/mile, though not by all that much. The nice thing about the thin air is that since my marathon-pace effort was much slower than usual, I cut way down on the physical wear and tear.

Then came the “hill from hell”, a mile and a half climb. The thin air really came into play when I was climbing, but I managed to keep running for the first mile of the hill before starting to mix in a few walking breaks. The big hill was followed by a drop, then another climb up to Inspiration Point. I had a couple 10:30-11-ish splits during the climbs, but I was happy to have avoided disaster, and from here it was essentially downhill to the finish. 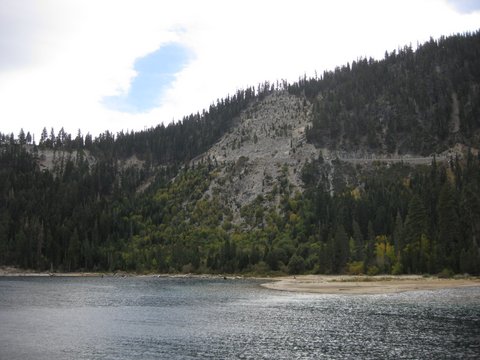 The road heading up to the halfway point, as seen from Emerald Bay

Inspiration Point is also the location of the 10am start of the half-marathon. Tip for anyone running the Lake Tahoe Marathon: DO NOT run the first half in anything near two hours. I did, which got me halfway through just in time to hear the gun and see the hundreds of asses spread across the entire road in front of me start to run.

The next five or six miles were spent weaving through the half-marathon pack, yelling at people to get the hell out of the way. (Side note: races should NOT allow people to wear headphones).

The first three of those miles were a steep downhill. They were my fastest splits of the race, but since I never got to settle into a comfortable stride my legs were trashed by the time the steep descent was finished.

Then, just when things were finally thinning out, we turned onto a bike path. The weaving and yelling started again. The path wan’t closed, so we also had bikers and walkers taking up the limited space.

But by the time I reached mile 17 or so, things finally settled down. With fewer than 10 miles to go, the math was simple; if I could run 9 minute miles to the finish, I would run a sub-4. My legs were dying and the air remained thin, but the remainder of the course was almost all flat to gently downhill and 9 min./mile happens to be the pace of my extremely well-honed survival shuffle.

I avoided the calf cramps that have ruined numerous races, averaged a bit under 9’s for the last miles, and crossed the finish at the beach in 3:57:41.

When I crossed the line, a volunteer gave me a coupon for a free wind jacket for finishing in the top 25. Then, when they posted the results, I found that like Ruth, I’d won my age group. 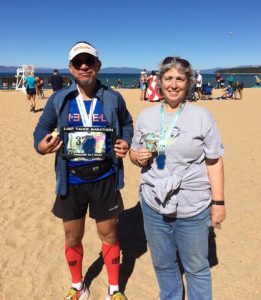 Champs! (Ray stopped doing his happy dance for the picture)

A celebratory post-race meal, and now it’s time to kick back and enjoy the rest of our vacation. Here’s hoping recovery time won’t cut into our hiking/biking/etc… 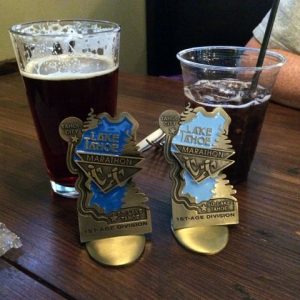