Skip to content
Home » Blog » Just a thought » What Would Johnny (Kelley) Do? 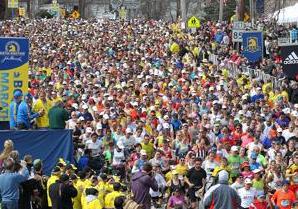 Update: The BAA has announced that 2013 runners who made it past the half-marathon but were unable to finish will get first shot at Boston 2014. No word as to the size of the 2014 field.

After the events of Patriot’s Day 2013, everyone anticipates that there will be significantly higher demand for entries to the 2014 Boston Marathon. It’s probably too late for hordes of additional runners to qualify, but a higher percentage of already-qualified runners will choose to apply, charity runners are eager to do their part to help the victims, and there’s a petition, signed by almost 30,000 people, asking the BAA to let the 5700 runners who were stopped short of the finish (most of them non-qualifiers) in.

The BAA, along with local officials from the cities and towns along the marathon route, will have some tough choices to make. I have a history of obsessing over the Boston qualifying process (there’s a reason one of my books is called Overthinking the Marathon), probably because I’m usually I’m right on the edge between ‘in” and “out”. I’m sure that the BAA is eager for my opinion as to what they should do (not).

I wouldn’t be too upset if the field size and the registration process remained unchanged for 2014. I wouldn’t go so far as to say that if we let the terrorists force changes then they win, but it does seem fair to keep the rules the same for everyone, whether or not they made their qualifying attempt before or after the bombing.

But it would be great if we could open up the field. The BAA managed to fit almost 40,000 people on the course in 1996 for the 100th marathon, even with everyone starting at once. With wave starts, they might be able to fit even more runners into the race in 2014. On the other hand, there would be less time for the advance planning needed to prepare for the crowds, especially when you consider the inevitable increase in security precautions.

Coincidentally, since I missed my BQ-5 by 36 seconds, a larger field can only help me get in.

If they do increase the field size for 2014, I would recommend that they register people in this order:

1) ALL qualifiers (as of the date registration for 2014 opens)

3) …and then fill out the field with charity runners

My favorite idea: With 40,000+ runners, there won’t be enough room on the course to race once you get past the elites. Since that’s the case, why not seed runners according to their charity donation? Maybe, as Amby Burfoot suggests, the process could target the One Fund Boston and other nonprofits that clearly benefit Boston’s public well-being. Even qualifiers would have to kick in, if they didn’t want to start behind the 6-hour sloggers.

However they do it, I hope the BAA finds a way to open up the race to as many people as possible. The bombers attacked the race by hurting the spectators, our fans and loved ones. In 2014 we owe them a pageant, the bigger the better.

4 thoughts on “What Would Johnny (Kelley) Do?”