This morning, I got up late (8 o’clock is late for me) after going to sleep at about 2:30AM following last night’s concert.  My ears were still ringing from the Milligram set, in spite of the earplugs I’d worn.  For breakfast, I washed down a cheese-and-veggie omelet and a side of bacon with a bucket of coffee.  It was just like the old days, only without the hangover, which made the whole breakfast thing a lot more palatable.

Ruth skipped the concert so she could get up at 5:30 to head to Lowell with Ruthanne to watch Denise and a host of other SRR runners in the Baystate Marathon and Half-marathon.  Last year Ruth and Ruthanne did most of their training by themselves, but this year, a group has coalesced around the Ruths.  They’ve been meeting at our house on Saturday for their long runs and at Fitness First in Arlington Center on Sundays for recovery runs and coffee and on Wednesday for a mid-week run, often involving hills. 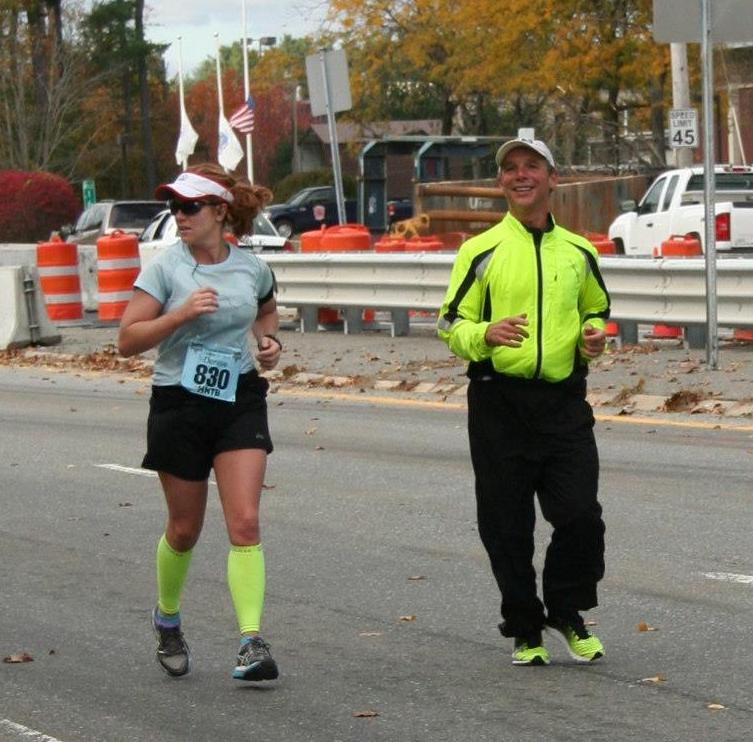 Denise is one of the faster runners in Ruth’s crew.  She’s helped push Ruth to run a little harder at the end of their runs.  Denise was hoping to go under four hours and she was at 1:54 at the half, but she ended up finishing Baystate in 4:08:19.  Steve ran the last half of the race with Denise, and she credits him with getting her to the finish by repeatedly reminding her, “mind over matter”.

Most of the rest of the group will be joining us at Cape Cod next weekend.  Ruth and Ruthanne are both on their third marathons.  They’re hoping their improved base will help them set new PRs.  Ruthanne is looking for something in the 5:15 to 5:20 range, while Ruth thinks a 4:45 is possible.

Allison and Kit are also thinking about trying for something around 4:45.  Allison’s half-marathon PR projects to a 4:30 marathon but she says that since it’s her first marathon she’ll be happy just to finish.  It’s Kit’s second marathon, but first where the temperature will be under 90° (she ran Boston this spring).  Kit is also signed up to run the Goofy Challenge, a half-marathon and marathon at Disney on consecutive days in January.

Jerome is on his eighth marathon.  He’s added CrossFit is training plan and his goal is less about time and more about ending up stronger and more flexible and mobile after training than he was before.

Pam and Adena aren’t running Cape Cod, but they’ll be there to cheer.  Adena was in Pennsylvania today, running the Tussey Mountainback 50 miler.  Tussey was her first ultra in 2009.  She’s done a lot since then, including a 77 mile run at Kettle Moraine earlier this year, and that helped her better her 9:44 from 2009 by running a 9:02 today.