Today was the Common Fence Point 5 Miler. Robin Shor and Barbara Granberg rode with me from Arlington to Portsmouth, RI for the event.  In addition to being a Pub Series race, it was also part of the Rat Series and the Red Fox Series, so there were over 350 runners, about twice as many entries as the year before. 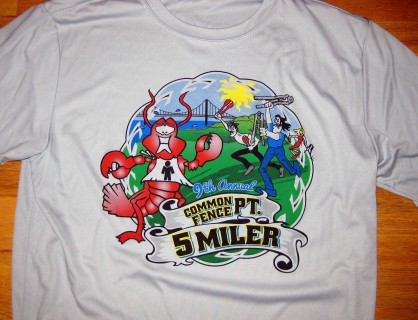 We got there about an hour before race time and picked up our numbers and goodie bags at the community center.  Our tech shirts came with a logo depicting a man-eating lobster being chased by zombies.

I spent the rest of the hour before the race chatting with all the people I knew, and there were lots of those. I also managed to grab a homemade chocolate chip bar before we started running. I wouldn’t normally eat something like that before a race, but that was just one of the benefits of going in knowing I wasn’t going to run very fast.

Common Fence Point covers maybe a square kilometer of land jammed in between busy Route 24, a golf course, and the ocean. The course had to wind back and forth a number of times in order to fit all 5 miles on the point. Some people don’t like all the corners, but I always enjoy courses that loop or double back so I get to see runners who are well ahead of or behind me in the race. When I’m running hard, the cheers from people I know help spur me on.  On a day like today where I’m just cruising through the race, it’s payback time.

It was a great day for running, sunny but not too hot, and with a cool breeze off the water strong enough to feel, but not strong enough to slow us down. I was still a little stiff from Friday’s run when I started the race, so I only ran at about an 8:30 pace for the first mile.  As my legs slowly loosened up, I sped up some, but I never went fast enough to keep me from chatting with the people around me.

Lots of other Somerville Road Runners were there. I ran most of the race between Aaron Beer and Tina Mack. I paced Aaron from behind – every time I caught up to him he would speed up to make sure he stayed ahead of me. I paced Tina from the front and at mile four I told her to follow me to the finish. I kept running ahead of her, slowly creeping up the pace, and she stayed with me until I waved her by at the final turn. We cut about 20 seconds off her last mile, which meant we probably were running at 7:45/mi. or so by the time we finished.  Tina was tired afterwards, and pleased that she didn’t throw up. 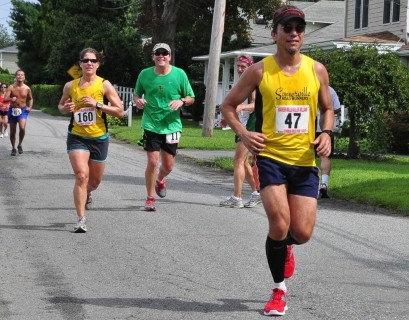 I finished in 42:27, good for 172nd place, almost exactly in the middle of the pack.  I had fun just showing up and enjoying the day, without worrying about my time for once.

After the race I hung around a little while to nosh and talk some more with my running buddies.  Then Robin, Barbara, and I got in the car to drive home, leaving the free post-race beer behind.

That didn’t make us the most virtuous SRR runners at the race.  As we were getting back on the highway, we passed Robert Cipriano and Jeff Silva, who were out getting in a few extra miles.  Robert and Jeff are also running Cape Cod in the fall.  Like me, they’re both 50+.  Unlike me, Robert won today’s race outright and Jeff finished 9th overall.  I have fond hopes of riding their coattails to a strong finish in the team competition at the Cape.

When I got home, I showered, and then it was time to visit Mina for a massage, followed by a double bunny evening with Ruth.  A rest week is coming up next.