I’m walking fine after yesterday’s 35 mile run, but running today would have been a bad idea.  Tomorrow, when I have to run a 5 mile race in Rhode Island?  Well, we’ll see.  That’s a whole day away.

Normally, I wouldn’t be running a race two days after a long run but I’m doing New England Runner Magazine’s Pub Series this year.  Tomorrow’s Common Fence Point 5 Miler is the fourth race (of six) in the series.

I’m a goal-oriented runner.  I always have at least one goal that I’m working on, sometimes more.  When I don’t have a goal, I feel lost.  Sometimes it takes a little fishing around before I come up with a goal that catches my interest.

After I finished the Mount Desert Island Marathon last year, I was trying to figure out what my next goal would be.  One of the things that I’ve never managed to do in the past was complete the Pub Series.  I’d usually do a couple of the races in the series every year, but I never made a point of doing all of them and earning the coveted jacket.  Given that nothing else was inspiring me to run, I figured I’d give the Pub Series a try.

For years, my goals had revolved around marathons and other long distance races or I was cutting back to heal from injuries so I could get back to long distance racing.  I thought about doing the Pub Series in 2011, but I turned 50 in the middle of the series, which meant that I had to compete as a master.  Racing against 40-year olds would pretty much eliminate any chance I’d have of scoring any points toward the championship.

For 2012, I figured why not run the Pub Series?  The idea was that for once, I’d train for speed in short races and see how I could do.  I might even have a chance to score once in a while in the senior age group, not that I had any illusions that my score would amount to much.  My SRR teammate Robert Cipriano had won the 50+ age group in 2011.  He was back for more, along with Paul Hammond, Reno Stirrat, and all the other record-setting Seniors from Whirlaway, and plenty of other fast old men from other clubs.

To get the most out of the experience, I probably should have done the series when I was still drinking (it is the Pub Series after all).  But at least I’d get to try something different.

It wasn’t a wholehearted choice, more a lack of any better options, but I had enough early enthusiasm for the idea to carry me through subscribing to NER (a requirement) and signing up for as many of the races as I could.  Not all of them were open for registration yet, but I was able to register for the first three races right away.

Then Ruth decided that she wanted to run the Cape Cod Marathon this year.  Once the topic came up, I realized that my heart was still with the long races.  I didn’t really care that much about the Pub Series.  If I was going to train seriously, I was much more interested in training to see how fast I could run a marathon, not a series of shorter events.  I just needed Ruth’s choice to nudge me back on the right track.

We signed up for Cape Cod in early March.  That was just before the first race in the Pub Series, SRR’s own An Ras Mor.  After many years of staring jealously at the pancake-flat 5K course in Cambridge while volunteering and dreaming of how fast I could run it, I was finally going to run the race myself.  I was sure that I’d be able to run a good time on such an easy course. 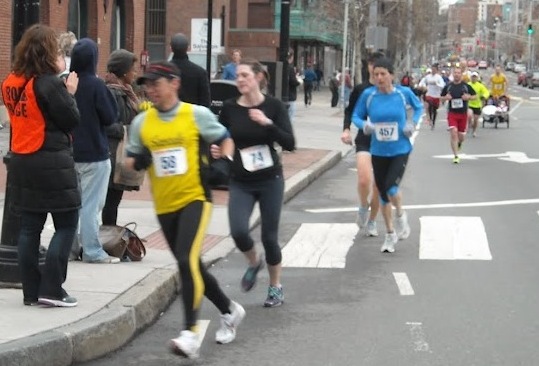 A 21:11 on race day put a halt to my delusions of speed.  I wasn’t close to scoring any Pub Series points, but more importantly, I wasn’t at all happy with my time.  I had convinced myself that, no matter what, I’d be able to run sub-21 on that course.  In reality, a 21:11 wasn’t that bad, and shouldn’t have been surprising given my age, recent race and injury history, and lack of real speedwork.  But I still need some time to come to terms with not being able to break 21.

The race confirmed my decision to focus on Cape Cod.  It’d be one thing if I could train hard and get significantly faster, but I knew that I wouldn’t hold up to the sort of speedwork I’d have to do to get results that would make me feel good about myself.  I was never going to be 40 again (who knew that 40 would ever seem young?).  I could probably get under 21 if I made that my goal, but it just didn’t seem worth the effort.  The marathon, on the other hand, was.

Suddenly, the Pub Series was more of an impediment to what I wanted to do rather than a goal.  I knew I couldn’t race the Pub Series all-out and train for Cape Cod at the same time.  I’m tougher mentally than I am physically.  When I’m racing, I’m more than capable of pushing myself hard enough so I regret it the next day.  And the day after that.  And often for the next few weeks, if not longer.  Ruth named it “Short Race Syndrome”.  It’s one thing to have that happen after a marathon, another thing entirely when it’s after a 5K.

Sometimes I jump into an effort, truly believing it’s what I want to do, when really I’m just trying the task on for size to see if it fits.  This turned out to be one of those times. But I still wanted to check off the box marked “Pub Series “ and I’d already spent a good chunk of the money, so I decided I’d find a way to fit the rest of the races in.

I held back a little in the next two races.  I ran hard but I didn’t leave my guts on the course by trying to shave a few more seconds off my time.  The results were in line with my An Ras Mor time, which if nothing else confirmed that as a base I could use to plan my training and set my goals for Cape Cod.

The final two races in the series fall on weekends where I don’t have long runs, so I can use them as tempo runs.  All I have to do is make it through tomorrow.