Well, that’s over with.  Today was my last marathon-plus training run before Cape Cod. From here on in, it’s just hills and speed and nice short 20 mile jogs. Large parts of the run went according to plan, but a few mistakes and some extra twists and turns meant I ended up running 35 miles on the day.

Before I started the run, I removed the extra eighth-inch lift from under my right heel that I had added on Tuesday.  The extra lift is one of those things that should work, but never does.  I’ve tried it before, and it always hurts my back.  This time I gave up on it quickly. I’d like to think I’m getting smarter, but if I was really getting smarter I wouldn’t have added it again in the first place. I left the rest of the changes to my shoe inserts in place

My plan was to run the 32 mile route that I rode a few weeks ago.  At about 7:30, I thought I was ready, so I headed out the door. It was around 70° outside, not too cool but much less humid than it’s been lately.

The bonus miles started early.  A half-mile into the run, I was in Arlington Center when I realized I had forgotten to take my Celebrex (an anti-inflammatory for my back). I turned back and went home, which added a mile to the run before I barely got going.

I also managed to forget my phone and my Road ID, but I didn’t realize that until I was almost in Lexington, much too far along to turn back. I decided I’d just have to be even more careful to avoid becoming road pizza the rest of the way.

Shortly after I got back on track I heard a car horn.  When I looked, I saw Steve Pepe, another SRR member, waving as he drove in the other direction. It was nice to see a friendly face among all the commuters.

I settled back into my routine, running five minutes then walking for a minute, over and over and over. I took an energy gel every 5 miles, and it was getting warmer, so I made sure to drink out of my Camelbak regularly.

When I’m running for a timed interval, one nice thing is that even though I’m on a very long run, I worry less about how far I have left to go. The main thing on my mind is how long to the next walking break, and that’s never very far away. The miles pass by without too much mental effort.

I was somewhere around 15 miles into my run when I reached the Kimball Farm ice cream stand in Carlisle. I still had a good amount of fluid left, but I wasn’t sure if there would be any place where I could get a refill before Concord. Besides, all the ice in my Camelbak had melted and my Heed was getting warm. So I stopped at the ice cream stand and the guy there was nice enough to give me a cup full of ice. I dumped the ice into my Camelbak and topped it off with water from the outdoor fountain. I was tempted by the idea of a quick dish of ice cream, but I didn’t have much money so I got back on the road instead.

The run from Carlisle to Concord was pleasant with plenty of shade. There were nice sidewalks most of the way, even though much of the road was sparsely settled.

I reached Concord Center at about mile 22. I still had plenty of fluid, so I decided to keep running and refill again in Lexington. But after I left Concord Center there was less shade, and by that time it was getting hot and I was starting to get tired.  The run became less pleasant and more like work.

After a few miles, when I turned onto the trail through the Minuteman National Park, I got some of the shade back, but only by adding on more bonus miles. My bike ride had gone on the main road straight through the park, but the trail twisted and turned, adding more distance to my run.

By the time I reached the end of the trail, I was really feeling the heat and the miles. The temperature had climbed into the upper 80s and I had to go back out into the open to cross Rt. 128 into Lexington.  What little fluid I had left was warm, so that didn’t help any. If Steve Pepe had driven by at that point I probably would’ve flagged him down to get a ride home.

But a little past the highway, at mile 28, I reached a gas station with a lovely air-conditioned convenience store and a Dunkin’ Donuts. I got a big glass of ice from Dunkin’ Donuts and 2 quart bottles of cold Gatorade from the store. I washed down two Tylenol with half a quart of Gatorade and dumped the remaining Gatorade and the ice in my Camelbak to tide me over for the rest of the trip.

After my chill break, I headed onward, slow and sore, but steadier.  I knew my route was going to be well over 32 miles, but I wasn’t sure exactly how much more and by this point knowing how far I had to go was important to me.  I was at 31 miles when I made it back to Mass Ave, the main road from Lexington to Arlington. From there, I knew I had at least three or four miles to go.

If running on the road in the sun was the only way to get back home, I probably would have trotted to the bus station at the Arlington border to make my 32 miles and then ridden the bus back. But I knew my last few miles could be on the gentle downhill grade of the Minuteman bike path, where there would be plenty of shade (blessed shade). So I decided to suck it up and run all the way home. 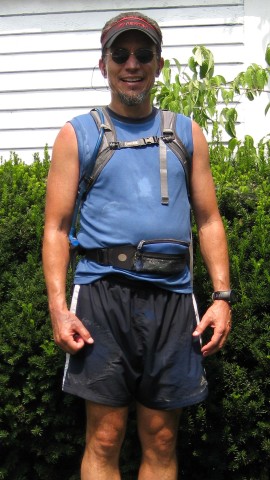 I finished at about 1:45 in the afternoon, sweaty and crusted with salt.  After I showered, I weighed myself. I was at 149 when I got up this morning, but I was down to 144.5 after my run. Yay, miles.

I was tired (duh). My Garmin was drained to only 23% of a full charge, and that’s how I felt too. A nap would have been nice, but the caffeine from six energy gels (three with double caffeine) made that idea a non-starter. I was almost too tired to eat but I had to have something, so I ordered a pizza.

Other than being tired, I felt fine.  The changes to my shoe inserts might have helped some.  At worst, they hadn’t hurt me any, and after a 35 mile test, that was very encouraging.  I had a blister in the usual spot on the inside edge of the ball of my right foot, but it hadn’t bothered me much while I was running, and again, after 35 miles, one medium blister wasn’t bad.  So I expect I’ll recover from the run with no problems.

However, I do think I’ll take it easy in the race on Sunday.