This morning, I went out for another ride with the Wednesday Wheelers. The route started in Concord and went out to Westford before returning to Concord for a pizza party at the ride leader’s house. I had to skip the party and head home because Ruth, Jane, and I were going out to dinner tonight with Ruth’s cousin Karen from New Hampshire. 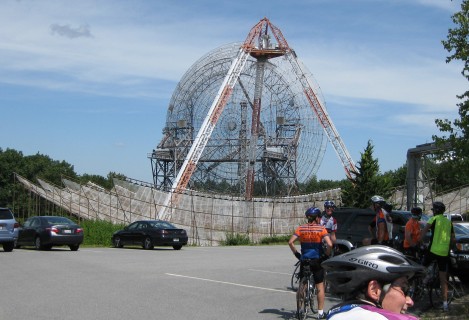 MIT’s Haystack Observatory was in Westford at the far end of the ride.  We were warned that the climb uphill to the Observatory would be difficult.  It was tough compared to the rest of the ride, but nothing compared to some of the ascents I ran up last weekend on the Kingdom Challenge course.  A number of riders elected to skip the climb and wait at the bottom for the group to return.  They missed out – those antenna arrays are impressive.

As much as I whine about biking, I have to admit cross-training on my bike is working well (so far). I’ve been able to add volume and intensity to my week without getting hurt (so far). Before I started biking I was doing 30 to 40 miles a week and my only hard workouts were my long slow runs. When I added biking, I jumped right up to 40 to 50 miles a week (assuming you accept the way I convert bike miles to running miles), and I successfully (so far) added track workouts to the long runs. My butt, hamstring, and back still feel beat up after a hard workout, but the extra break between running days has been successful in keeping everything to a dull roar (so far). I’m optimistic (so far) that it’s all going to pay off in October.

The Olympics continue. Galen Rupp’s finish to win silver in the 10,000 meter final was impressive, but this morning I watched a replay of the men’s 1500 meter final and saw Leo Manzano’s stunning kick carry him to a silver medal behind Algeria’s Taoufik Makhloufi. Makhloufi was so sure he’d won that he started celebrating before he crossed the line.  20 meters more, and Manzano might have given him an unpleasant surprise.

Manzano is only 5’5″, a midget among lanky milers.  He didn’t win, but his silver was a victory for me, Bob Costas, and short guys everywhere.