When Ruth and I went to bed Saturday night, we were intending to get up early Sunday morning, run a 4 or 5 mile loop around Lyndonville, and then return to our room to watch the end of the women’s Olympic marathon before heading home. Instead, we woke up at 3:30 because some people decided that right outside of our room was a good place to hold a party. I had to get up and yell at them to tone it down. It took us a while to get back to sleep, so we ended up starting our run a little later than we had planned.

A woman ran by while we were standing in the hotel parking lot waiting for my GPS to sync up. She pulled away as she led us through the beginning of our loop, but after about a mile Ruth sped up and after that we kept pace with the mystery runner.  Finally she turned off our route to go home while we kept going, passing through yet another covered bridge before we got back to the hotel.

About a mile and a half into the run, my heart rate monitor went nuts, jumping from about 115 bpm to as high as 202 bpm. I don’t know why. It’s been flakey in the past, but usually at the beginning of a run. If it happens again, I’ll try replacing the battery in the chest strap. 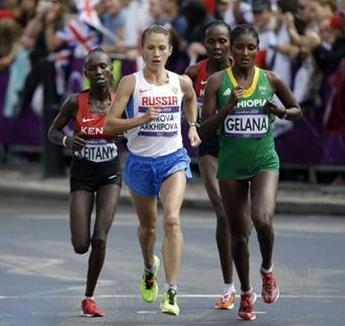 Even with the late start, we still managed to get back in time to watch the last three or four miles of the marathon.  It was an exciting race, and I was happy to be there to vicariously share in the Gelana’s joy as she won, but I also empathized with the second, third, and especially fourth-place runners as the TV cameras closed in while their dreams of precious metals ebbed away.  Maybe they need us more. Someone always wins, and winning is a great thing, but victory is fleeting. The one thing we all share, sooner or later, is losing.  But losing after trying your hardest is still something to be proud of.