When I first heard about the Kingdom Challenge half-marathon I thought I might like to run it someday.  Then I looked at the results and I saw times that made me think that, if I showed up, there was a good chance I could place in my age group.  Today’s run shattered that illusion.  The Challenge probably isn’t the most difficult half-marathon around (the Pike Peak Ascent is hard to beat), but it’s still a brutal run.

Since we’re in Lyndonville for the Libbey family reunion, and the place we’re staying is right on the course, I figured I might as well check it out.  I wanted to do a 20 mile run, but our hotel is at the three and a half mile point of the race, so a simple out and back to the finish wouldn’t be quite enough.  Instead, I plotted a short loop back toward Lyndonville that picked up the course just before mile two.  That added enough so that if I turned back once I’d run 12 miles, I wouldn’t quite run all the way to the finish in St. Johnsbury, but I’d get my 20 in by the time I got back to the hotel.

It was humid but cool when I started my run.  I did the loop, passed by the hotel, and ran under I91.  There were a couple of covered bridges just past the interstate, and then I started climbing away from the river valley.  And I kept climbing.

I was running on quiet dirt roads through lovely Vermont countryside.  It wasn’t long before I was ready to trade them for some flat concrete city sidewalks, but the hills kept coming.  I stopped at intersections to check my course maps and I paused a number of times to take pictures with my iPhone.  Those delays slowed me down some, but I wasn’t at all upset to take the short breaks.  The relentless climbs were slowing me down even more.  There were downhills to match, but I wasn’t making up much time because they were often steep enough to make me slow down to protect my back. 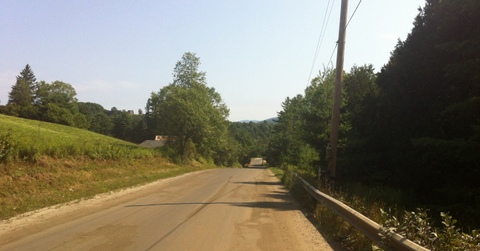 Still, it was a lovely Vermont summer day.  I was enjoying the scenery, the fresh air, and the change from running in suburbia in spite of the hills.

I listened to two “This American Life” podcasts as I ran, then I switched to music once they finished.  This was the first time I’d listened to TAL.  I realize I’m late to the party, but now that I’ve finally arrived, I’ll be running with Ira and the crew more often in the future.

Just before the 12 mile point in my run, I reached a cemetery, an appropriate point to turn back.  Because I’d run the extra loop before starting my out-and-back on the course, when I turned around I was almost two-thirds of the way through my run.  That made the trudge back through all those hills to Lyndonville a little easier to tolerate.

The temperature rose to about 80 before I finished running, but that still felt almost cool after the last few days at home.  The bright August sun pounded down mercilessly from a nearly cloudless sky, but there was enough shade on the course to keep the sun from becoming too oppressive.  Even so, I was ready to stop when I finally made it back to the hotel in Lyndonville.   It hadn’t been a very fast run, but it was still one helluva workout.

The run satisfied my curiosity about the Kingdom Challenge, but I still might go back and enter the race someday.  I know I won’t have a fast time, but at least I’ll only have to run through the hills once! 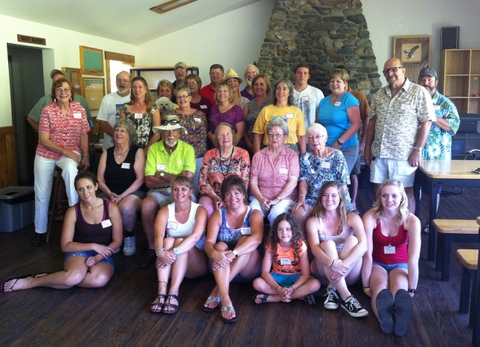 When I got back to my room, I grabbed the jug of water from the tiny hotel refrigerator and I was very pleased to find that the water was cold enough to have little chips of ice floating in it.  I drank enough to numb my throat, showered, and then I was off to the Lyndon Outing Club with Ruth and her mom for the Libby reunion.