Skip to content
Home » Blog » Journal » CCM: A Turn in the Road?

Today’s plan called for a 13 mile run at 9AM with SRR from Herbert Lin’s house in Chelmsford.  Our alarm went off at 5:30 because Ruth and her crew wanted to run farther, so they were going to head up early and get in some extra miles by starting at 8AM.

It was supposed to get into the 90s with a bright sun today.  Since I was already up, I was sorely tempted to get my run in early and blow off the group run.  But I hadn’t run with the group lately and it was only 13 miles.  Besides, Herbert has a pool and there’s always plenty of good food after a run at Herbert’s house.

The course went out and back on the Bruce Freeman Rail Trail, which thankfully was well-shaded for the most part.  We met up with Ruth’s group at the far end, then Sara Radkiewicz and I headed back a little ahead of the rest of the pack.  Along about mile 10, I dropped in a couple miles at a marathon pace-ish effort which were slower than I would have liked.  Sure, it was hot, but running on a shady rail trail with a slight downhill grade should have made up for that.   Still, it was nice to pick it up a little at the end of the run.

When I got back to Herbert’s, the pool and the food were as welcoming as expected.    I was surprised to see some of the people from Gil’s Athletic Club there.  I ran with G.A.C. when I was running ultras regularly, and soon we were sitting in the pool, telling tall tales about running up and down tall mountains.  This got me all excited about ultramarathoning again, which is sort of a pain, since I’d just talked myself into postponing any ultra attempts in order to make a try at Cape Cod. 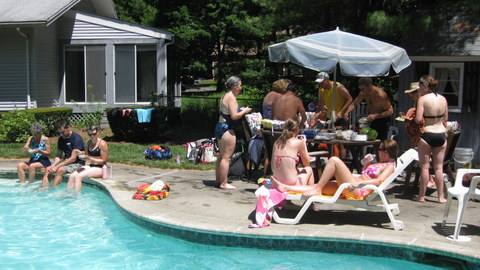 If I’m honest with myself, what I REALLY want to do is pick up ultrarunning where I left off, and maybe someday make another try at finishing a 100 miles race in under 24 hours to earn that elusive belt buckle.  My SRR friends Shaun and Adena are both busily training for the Vermont 100 next year.  Another guy I know, Brian Talon, just buckled at Western States in his first attempt at a 100.  I’m happy for them, but they do make it harder for me to resist the pull of longer races.  The practical me knows my nagging injuries would make success at a 100 mile attempt unlikely, but that doesn’t quiet the little voice that keeps telling me I’ll never know unless I try, and if I don’t try, I’m just a quitter.  I can be hard on myself.

Maybe seeing the folks from G.A.C. is an omen of some kind?  Maybe my practical side will win out after all?  Who knows?  One of the G.A.C. guys, Martin Sullivan, is the co-race director for the Stone Cat 50 in November.  Registration for the Stone Cat is full, but people always drop out, so I gave Marty my email address, and we’ll get in touch this fall.  If there’s space, and I’m still feeling the call, who knows what will happen?  The one thing I do know is that neither marathons nor ultras are going to get easier as I get even older.

I’m running the Bear Brook Trail Marathon in a couple of weeks.  It was going to just be a long training run for Cape Cod, but now it’s also going to be a test of how I might feel about going twice as far in November.  Until then, I’m going to keep on track, and build a plan for Cape Cod.  But not today.