Skip to content
Home » Blog » Just a thought » “To really try to be informed and literate today is to feel stupid nearly all the time, and to need help.” 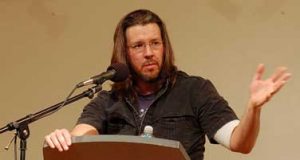 I just finished reading Both Flesh and Not, a collection of some of David Foster Wallace’s essays. It includes the introduction he wrote as guest editor to The Best American Essays 2007, which started off as musings about the subjective process of selecting the “best” but soon enough swerved toward thoughts that are even more relevant today than they were back then.

I know, tl/dr. Let’s just say that DFW knew something like Trump was coming. How much that informed his 2008 suicide, we’ll never know.

“There is just no way that 2004’s reelection could have taken place—not to mention extraordinary renditions, legalized torture, FISA-flouting, or the passage of the Military Commissions Act—if we had been paying attention and handling information in a competent grown-up way. “We” meaning as a polity and culture. The premise does not entail specific blame; or rather the problems here are too entangled and systemic for good old-fashioned finger-pointing. It is, for one example, simplistic and wrong to blame the for-profit media for somehow failing to make clear to us the moral and practical hazards of trashing the Geneva Conventions. The for-profit media is exquisitely attuned to what we want and the amount of detail we’ll sit still for. And a ninety-second news piece on the question of whether and how the Geneva Conventions ought to apply in an era of asymmetrical warfare is not going to explain anything; the relevant questions are too numerous and complicated, too fraught with contexts in everything from civil law and military history to ethics and game theory. One could spend a hard month just learning the history of the Conventions’ translation into actual codes of conduct for the U.S. military… and that’s not counting the dramatic changes in those codes since 2002, or the question of just what practices violate (or don’t) just which Geneva provisions, and according to whom. Or let’s not even mention the amount of research, background, cross-checking, corroboration, and rhetorical parsing required to understand the cataclysm of Iraq, the collapse of congressional oversight, the ideology of neoconservatism, the legal status of presidential signing statements, the political marriage of evangelical Protestantism and corporatist laissez-faire…. There’s no way. You’d simply drown. We all would. It’s amazing to me that no one much talks about this—about the fact that whatever our founders and framers thought of as a literate, informed citizenry can no longer exist, at least not without a whole new modern degree of subcontracting and dependence packed into what we mean by ‘informed’.”

“Hence, by the way, the seduction of partisan dogma. You can drown in dogmatism now, too—radio, Internet, cable, commercial and scholarly print—but this kind of drowning is more like sweet release. Whether hard right or new left or whatever, the seduction and mentality are the same. You don’t have to feel confused or inundated or ignorant. You don’t even have to think, for you already Know, and whatever you choose to learn confirms what you Know. This dogmatic lockstep is not the kind of inevitable dependence I’m talking about—or rather it’s only the most extreme and frightened form of that dependence.”