I recently found this clip in the April 1965 Long Distance Log:

The clip was 50 years old, and I wasn’t starting with a lot of information, but I was curious about how that story turned out so I did some searching.

My Google-fu was powerful and luck was with me, and shortly Jim Bevins’ energetic voice was on the other end of my line.

When I asked him about the LDL clip, he told me that, “She knew that [running was important] going in.” Even before they were married, when they’d go somewhere Jim’s future wife would drive them back to her place, and afterward, Jim would run the 8 miles from her house to where he was staying.

Jim has run marathons in seven different decades. His first was the Western Hemisphere Marathon in Culver City, CA in 1957. He was 19, and finished 4th overall.

Jim’s run five marathons since turning 70. He prefers to avoid the pounding of road marathons, so all of them have been on trails. He’s found that as you get older, even trail racing is tough, especially out west. “Your eyesight isn’t as good…those rocks blend right in with the dirt in the desert and your balance isn’t as good so I can never make any time coming downhill with all those rocks in the trail.”

Last year he only ran one race, the Moab Trail Marathon in November. He found he Moab course particularly challenging. “I was in the Special Forces and I don’t remember doing anything like that.” He figures he could run sub-5 “in one of those Rock and Roll Marathons at sea level”, but the difficult trail at Moab affected his time. “You can look it up,” said, Jim, “so I can’t fudge about it. It was 7 and a half hours and I know you’re going to laugh.” Jim’s time, however funny, was good enough to earn him the national championship for his age group.

He’s won many other championships over the years. “I don’t care about running against the clock to see how fast I can run. I just want to win my age group. Time’s not important. I’m old school – time will come if you run against good competition.”

The marriage mentioned in Long Distance Log has been over for a while. For the last 22 years Jim has been with Margie, who supports his running habit.

Here’s Jim (in the pink shorts) after winning another USA Trail championship, at the 2010 Dirty Half-Marathon in Bend, OR: 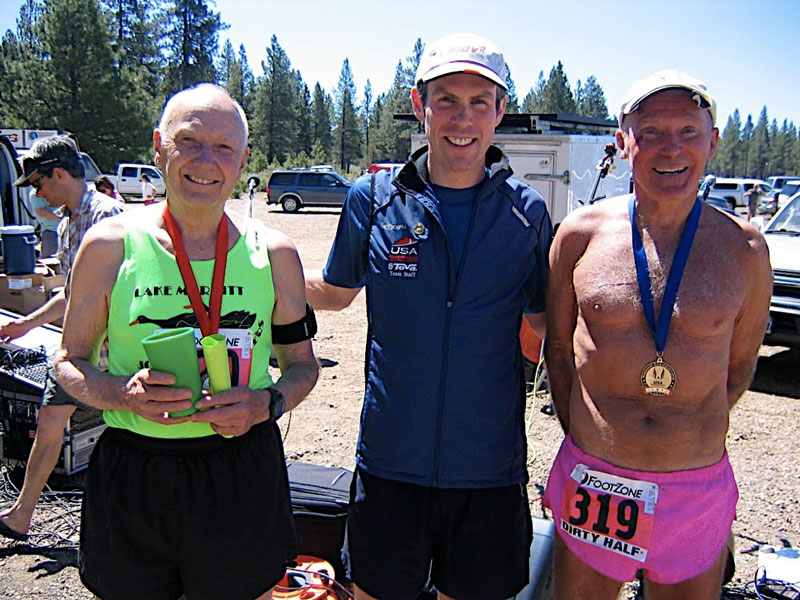 Margie made the shorts from material they picked up at a Wal-Mart. Jim says that women tell him they like them, “though men don’t have much to say.” They also serve a useful purpose. “If you’re 28, and you’ve got some guy who’s 77 beating you, they might say, ‘Hey, he didn’t run the thing’. That’s why I wear those pink shorts, because people say ‘oh yeah, I saw him at the 2 mile mark, the 8 mile mark, the 10 mile mark…’”

Running isn’t everything. Jim says, “If I had to choose between fishing and running, I’d never run another step.” He’s not happy with the recent trend toward exorbitantly high race entry fees. “I’d rather spend my money going to the Caribbean and going fly fishing in the ocean.”

But he’s got no plans to quit running any time soon. He’s driving his RV to Montana for a fishing trip this year, and he hopes he can find a race or two that he can run in along the way.

So the story continues. And I’m pleased to find that with running, fishing, eating, and good companionship, the Jim Bevins story turns out to be a happy one.