One of my Facebook friends, Rachael Toor, just came back from the Jerusalem Marathon. She called the race “by far the most spectacular urban marathon” that she’d ever done. Over 25,000 runners participated in the weekend’s events, which included races covering distances from 800 meters up to the full marathon. 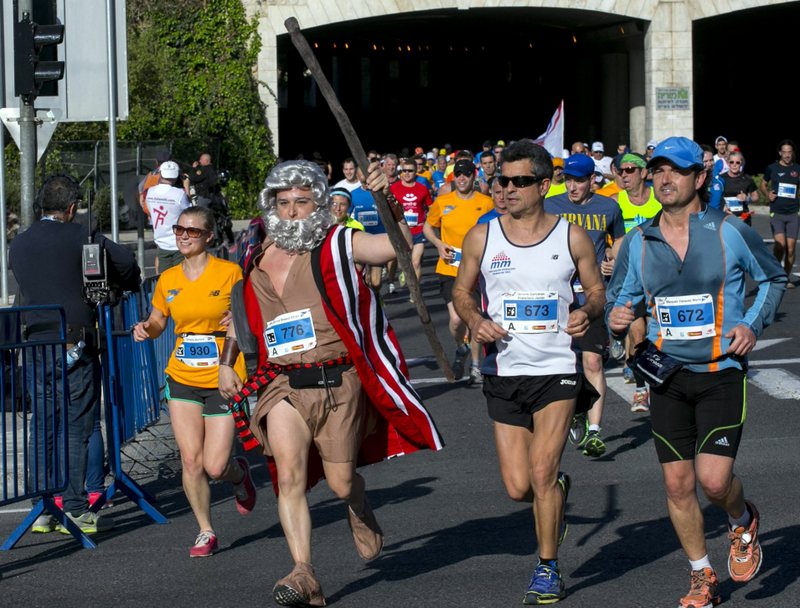 Moses parts the runners at the 2014 Jerusalem Marathon (Fitoussi photo)

In the context of the new security procedures for this year’s Boston Marathon, I had been curious about how Jerusalem addressed the issue of runner and spectator safety. Israel, of course, has had to deal with much more in the way of terrorism over the years than we have here in the US.

One controversy among Boston runners is the new bag check policy, which requires runners to check their clear, BAA-provided bag at the finish before getting on the bus to Hopkinton. In previous years, runners, many of whom have to spend 4 hours or more outdoors in potentially nasty weather waiting for the race to start, could check their bag on a bus in Hopkinton just before their run.

Meanwhile, according to Rachael, Jerusalem has “a bag check with no regulations at all.” Perhaps they realize that the runners aren’t the problem.

Rachael also says that there was “way less visible security than in most other major cities.” Jerusalem had 1000 police along the course, while Boston will have over three times as many. The Jerusalem course twists back and forth within the city and the whole area is basically shut down for the race. That could make security easier than it is for Boston, where officials have to cover a 26-mile corridor for the point-to-point race.

On the course, an Israeli runner pointed out to Rachael that much of the city, and certainly most of the marathoners, were trained in security. The mayor, an experienced marathoner who ran the half, said, “We do this [security] all day, every day.”

Boston could learn from this. I’m confident that most runners can tell the difference between pre-race jitters and “I’ve got a bomb in my bag.”

Of course, it’s not all just Manischewitz and anemones. A report on the 2012 edition of the race complains that most Palestinian West Bank residents would never be given permission to enter the city for the race. Another reporter discussed his thoughts on running only a day or two after reporting on bombings in the city.

But so far, Jerusalem has managed to strike a reasonable balance between safety and celebration for runners and spectators. Let’s hope Boston learns to do the same.