Everyone expects that there will be an increased demand for entries to the 2014 Boston Marathon after the events on the most recent Patriots Day.  Back in May, I wrote that because of weather and time constraints, I didn’t expect to see a massive increase in the number of runners trying to qualify in the summer.  While we all wait for the BAA to announce the size of the 2014 field, I thought I’d take a look at whether the numbers back me up.

Using the Boston Qualifying (BQ) data from MarathonGuide.com, I was able to compare the results for 2012 and 2013 from 12 races occurring between Boston and the time when registration for the following year opened. 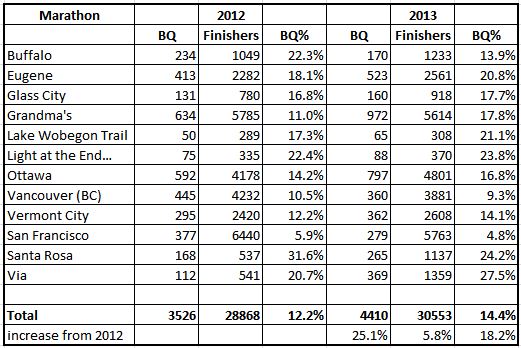 What’s interesting is that while the number of finishers increased from one year to the next, the percentage of runners who qualified increased at a much higher rate. A mathematician certainly wouldn’t call this data statistically significant, but it might indicate that those who ran summer marathons were more focused on hitting their BQ time.

(Update: The numbers for Santa Rosa and Via have been added and the BQ count for Vancouver (BC) has been fixed since the original post.

84% of the increase in finishers in these 12 races is due to runners flocking to the last/best chance races of Santa Rosa and Via.

Keep in mind that Marathon Guide tracks finishers – the numbers don’t show how many runners dropped out during the race, and how many never showed up at all.  I talked to officials at Santa Rosa and Via, who reported about 30% no-shows, well over the typical rate of around 18%.  Apparently, lots of registrants knew they had no chance to BQ, so they didn’t bother to run.) 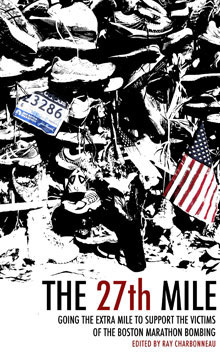 Want to help the victims of the Boston Marathon bombing?  All proceeds from sales of The 27th Mile go to The One Fund Boston.

The 27th Mile is a new anthology full of articles, stories, and poems about running and runners that extol the spirit that first got us out on the roads to run, that brought us to Boston on a sunny spring day, and that will bring us back to Hopkinton next year. It’s not your typical running book, but I think it speaks to something we all share.