Today was my day to sit around and do nothing while others ran.  It seems to make them happy.

There’s a very pretty five mile loop that circles the Mystic Lakes.  Half of it is on undeveloped parkway, which we’re lucky to have near our home.  Last fall we did a group long run on that route.  I set up a table in the main parking lot and people came by whenever it was convenient, dropped off their stuff, and ran the loop as many times as they wanted, refueling whenever they returned to the table where I waited with their stuff.

It makes for good a compromise between finding a pace that lets everyone run together and running by yourself at your own pace but with no one to keep you company.  People run at whatever pace they want and in whichever direction they want.  They run in smaller groups, yet they still get to see everyone else at the table or whenever their paths cross.  There’s plenty of opportunity to mix things up by swapping partners or changing directions, or you can just say “hi” when you meet another group and move on.

Ruth and her crew enjoyed the run, so we decided to do it again this year.  Last year we did it in mid-September, but this year it didn’t fit into everyone’s calendars until this weekend.  We won’t be doing it this late in the year ever again.  Last night we had the first frost of the year, and it stayed chilly though most of the morning.  Instead of sitting outside and sipping coffee in my beach chair while I waited, this year I sat in the car, coming out only when someone stopped at the table. 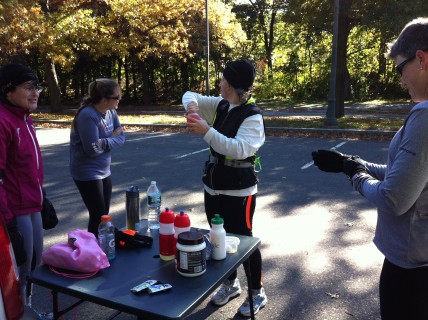 It’s never a good idea to try something for the first time on race day.  My first marathon taught me to always check ahead of time to find out what they’ll be serving at the water stops.  I couldn’t stomach whatever it was they had at Vermont City in 1993, so I had to run the whole race on just water.  At Cape Cod, they’re serving Cytomax, so yesterday I bought some to bring to the run for people to try.  A few people thought the taste was too sweet, but no one got sick from it and that’s what really matters.

It might have been too cold for standing around, but it was a beautiful sunny day for running.  15-20 people stopped by the table at one time or another, most more than once.  The Davis Square group fit it in as part of their 12 mile loop.  Ruth and her crew did three loops as their last longish run before the Cape.

Ruth was very pleased with her run.  She did the 15 miles in about 2:45, which works out to a good pace for her, even counting the time spent lingering at the table to chat and mix more Cytomax.  She felt great after she finished, ready for a trip to the diner to refuel.  Her third marathon should be a good one!

I could have used a run, as my weight has crept back up above 148.  But my week of comfort food is over, so I expect I’ll be fine by race day.