Today was my last long run before Cape Cod. My plan called for about 18 miles, long enough to be worth doing, but not long to take a lot out of me.  Today was also another New Shoe Day!  Now I have two relatively new pairs going, which will help my legs stay fresh leading up to the marathon.  I always have at least two pairs of shoes going in rotation.  Shoes need recovery time too.

The battery in my GPS watch was dead when I took the watch from its charging cradle this morning.  Over time gunk builds up on the terminals, so sooner or later the connection becomes unreliable and the battery drains instead of charging.  A quick scrub with an alcohol-soaked Q-tip and it’s good to go.  Of course the watch needs to charge before I can use it again, so I had to bring my iPhone along to track today’s run.  A smarter person would clean the terminals regularly instead of waiting until it’s too late.

Hassan Haydar and Bill McCabe have run the Boston marathon course for the last 25 Sundays, starting with race day in April.  This weekend was going to be their 26th and final run.  I ran marathon #6 with them back in May and I wanted to check back in to congratulate them as they wrapped things up.  Hassan usually reaches the finish a little after 10:30, while Bill takes a little longer.  I timed the start of today’s route to make sure I’d get to the finish in time to see them both cross the line.

It was a great day for running, sunny and 49 when I left the house.  The first 11.5 miles went off as planned and I arrived at the finish line on Boylston St. just before 10:30.  No one was there, but I wasn’t worried.  I knew that Hassan was running the last few miles with some of his family, so I figured maybe they had slowed him down or maybe he was holding back to stick with Bill for their final run.

I continued to wait, and no one continued to arrive.  As I waited, the clouds came in and it started to get colder.  After an hour, I gave up and started home.  I ran backwards along the course for a mile and a half, thinking maybe I’d run into Hassan and his group, but to no avail.  As I left the course to return to Arlington, I wondered where everybody was.  I hoped they were all OK.

The good thing about waiting around for an hour before heading back was that I came into Davis Square a little after noon, just as the Honk Festival parade began.  The Honk Festival is gathering of activist street bands in Somerville.  Bands play ramshackle music where enthusiasm is much more important than precision and there’s dancing and giant puppets and the proverbial good time is had by all.

The festival runs all weekend, capped by Sunday’s big parade.  Bands lurched their way toward Harvard Square, honking and squawking, with marchers on stilts and twirling hula-hoops, and crowds of gawkers lining the roads.  I ran through the parade heading in the opposite direction, dancing to the music and high-fiving marchers while dodging between the bands and the spectators.  More long runs should end this way. 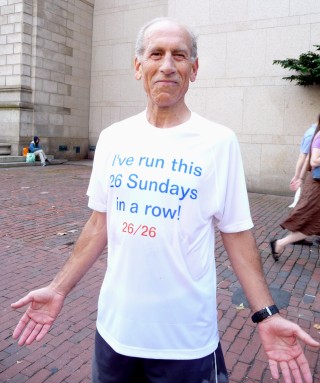 When I got home, I emailed Hassan to find out what had happened.  He told me that everything was fine.  What happened was that, after running the Boston course on 25 consecutive Sundays, they decided to do their last run on Saturday.  Oops.  He sent me a link to some pictures from Saturday’s finish, so I didn’t miss everything, I guess.