This week some friends shared a LiveScience.com article with me that asked whether global warming was making marathon times slower.  I did not need to see that post.  With three weeks to go before Cape Cod, I already have enough to worry about.

The article referred to a study published by PLOS ONE that looked at Boston Marathon race results from 1893 to 2005, the years when the race started at noon.  The authors found that for every increase in temperature of 1.8°F, winning race times increased by about 20 seconds.

At about the same time, Amby Burfoot sent me a link to another study that analyzed the effect of various environmental parameters on marathon times.  They found that changes in temperature had the greatest impact (duh!).

According to this study, slower runners (i.e., you and I) were affected more as the temperature moved farther from the theoretical ideal as measured in this study.  Elite runners only lost about 6% of their speed when temperatures went up 20°.  The average runner lost about 18%. 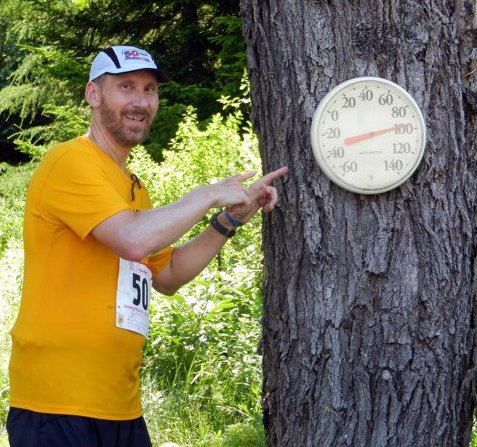 I suspect that might overstate the difference.  In the study, elite runners ran fastest when the temperature was about 39°F.  The slowest runners in the study performed best at about 50°F.  That means that for the faster runner, +20 is only 59°, while for the slow runner an additional 20 degrees brings them to 70°.  I suspect that if you took elites’ times at 50° and measured how far they fell off when they ran at 70°, the numbers would be closer to 18% than 6%.

Also, the idea of “race temperature” is somewhat arbitrary.  Since most races start in the morning, temperatures are usually lowest at the start and then rise during the race.  Thus, the average race temperature in any race is higher for slower runners than for faster runners.

Let’s assume I’m an average runner.  If I’m capable of running a 3:28 under “ideal” conditions, then if race day temperature hits 70°, my temperature-adjusted race time would be a 4:05.  Ouch.  Let’s hope for average weather at Cape Cod this year.

But what about global warming?  During the period covered by the study, the average Boston temperature for April rose 0.031°F per year.  The study concluded that even though temperatures have risen measurably, the current effect on winning marathon times is so small that’s it’s lost in the noise.  The authors predict that by 2100 the effect will be measurable.  I’ll be 139 in 2100.  I suspect I won’t be worrying about much of anything by then.