Today was New Shoes Day!  I opened up one of my last pairs of GEL-Hyperspeed 4’s this morning.  Nothing beats a run on a beautiful fall day in a fresh pair of my favorite shoes.  If you ask me, New Shoes Day should be declared a holiday.

New Shoes Day doesn’t come as often as it used to.  One of the benefits of improving my running form is that I get more miles from a pair of shoes.  My latest pair of shoes lasted for 270 miles before I retired them.  That’s still not a lot.  The usual rule of thumb stats that most people should be able to run 500 miles in a pair of shoes before they need to be replaced, but my rigid feet hammer through midsoles quickly.  I never used to get much more than 100 miles out of a pair of shoes.  Buying new shoes that often gets expensive, so now that they regularly last more than twice as long, I’m pleased. 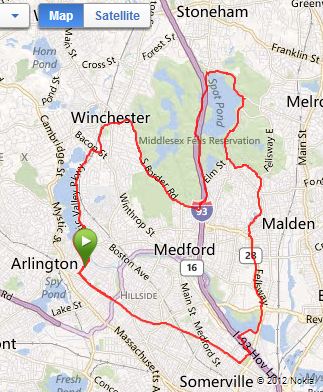 Today was a big day for another reason.  This was my last hard long run before the marathon.  I cut back on the distance on my last few long runs, so I only ran a little over 20 miles, but I did them on my six town course through Arlington, Somerville, Medford, Malden, Stoneham, and Winchester.  The route climbs some big hills (Winter Hill, Highland Avenue, and South Border Rd. in the Middlesex Fells), so it’s a good workout.  I still have one more long run planned, but I’ll run that one on a flatter course to make sure I don’t work too hard just before the marathon.

I had an equipment failure early in my run.  I was about a mile from home when I noticed that my jockstrap had come apart.  Luckily, I was still close enough to home to turn back and change.  It was annoying, but it helped me in a way.  I’ve run this course a number of times so at any point along the way, I have a feel for how far I’ve come and how far I have to go.  Today, after the extra miles at the start, I was always an extra 2 miles further along than I thought I was.  That’s a good feeling.

I listened to “This American Life” for most of the run, but I switched to music for the last couple of miles along the Mystic Lakes.  I was in a good mood because it was a beautiful day and I was almost finished with my run so I sang along with my iPod as I ran.  I usually try to avoid singing when other people are around because it sounds weird.  When I’m running I don’t sing the entire song, I just sing a phrase here and there when something fits in with my breathing and my running rhythm.  Anyone who’s listening just hears random lyrics fragments, which might make for an entertaining game of Name That Tune if they weren’t half-sung/half-muttered by someone who’s mostly out of breath the whole time.

Today I was caught singing twice.  The first time it was an older couple who were running on the dirt path by the side of the lake, hidden from the road where I was running by a hill.  The path rose up back to street level just as I caught up with them, so they heard me spitting out fragments of “905” by The Who, which isn’t the easiest song to understand even when you hear the whole thing.  But they just smiled and waved as I ran past them.  A little farther on, a young couple wasn’t as happy when my faux-Dr. John growl on “Right Place Wrong Time” startled them from behind.

There’ll be more music tonight.  Ruth and I are going to see David Byrne and St. Vincent at The Orpheum in Boston.  I’m tired from the run, but there isn’t really time for a nap.  Maybe if I sing with them, I’ll stay awake.