My default plan for today was to ride a little less than usual, maybe 20 miles or so, and then run a little longer than usual on Thursday, 12 miles instead of eight.  This was partly because I did some extra riding Monday, and partly because I still had hopes that Ed would find the right size pedal extender and I could use the shorter ride to break in my new shoes and cleats.

When I woke up, rain was pouring down outside.  The forecast called for more rain throughout the day, so I put the bike ride on hold.  Instead, I decided to do an extra strength workout.  Since I was skipping the bike, I figured today would be a good day to bump up the intensity by replacing my 15 lb. kettlebell with the 20 lb. one I had waiting in my garage.

Ed didn’t get in to work until noon.  When I called, he told me that the part probably wouldn’t arrive until next week.  Then the sky cleared up for most of the afternoon.  So it goes. 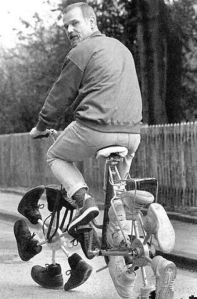 Lately it seems like this has become a bike blog.  Really, nothing could be further from the truth.  Biking is still just cross-training for running.  I’d rather be running, but I can’t run as often as I’d like, what with getting old and all.  Biking helps me keep improving as a runner, or at least it helps me keep from breaking down under the ever-increasing weight of all those calendar pages.

If it were just about getting ready for Cape Cod, I wouldn’t bother with the risk, expense, and hassle of dealing with cleats.  But it’s also about staying ready for the next race, and the one after that, and the 12 McMiles on a random Thursday run in March ten years from now.  So if better gear will help me become a better biker, it’s worth taking a little time now to get it right.

Cape Cod isn’t the end of anything.  The race is just one more stop on a trip that, with any luck, I’ll continue for the rest of my life.