Skip to content
Home » Blog » Improv » CCM Diary: Making It Up As I Go Along

It was another lovely, cool morning so I decided to get my run in early today.  The downside to running Thursday morning is that I miss out on some recovery time after Tuesday’s workout and my long bike ride on Wednesday. When I run at Casey’s on Thursday night instead of running in the morning, I usually feel a little better because I get a few additional hours between my workouts.

This morning, I thought about running an extra few miles to help make up for logging a low number on Tuesday, but  I try to listen when my legs have something to say and once I got going they told me they didn’t feel like pushing it.  I could have trudged through anyhow, but a couple miles on Thursday aren’t as important as being fresh for my core workouts on Tuesdays and Saturdays.

The upside to running in the morning is that leaves Thursday night free to do other things. I might go out and catch some comedy tonight.  Driving (and parking) in the city is not fun, but there’s a Thursday night improv meetup that I sometimes drop in on, an open mic/contest run by my first improv coach, and the usual roster of shows at ImprovBoston, where I got most of my stage time back when I was an improv wannabe, all conveniently near Red Line stops in Cambridge. 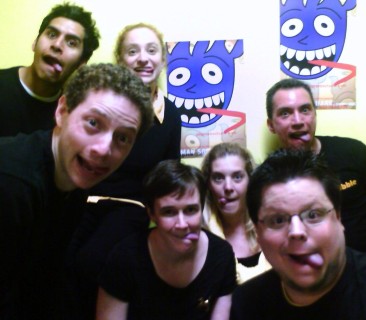 I learned a lot in the years I was trying to do improv. I gave it a good try and it was a lot of fun, but my performances were wildly uneven at best.

One of the things I learned was that I was better suited to solo pursuits like writing or running.  That doesn’t mean that trying improv was a mistake, nor does it mean that more gregarious people shouldn’t run. But certain activities do match up better with certain personalities.

Improv does have some things in common with running.  One is that you need to focus and work hard to get results.  Part of the reason I stopped doing improv was that I was frustrated with the quality of my performances and I felt that if I wanted to improve I needed to practice more.  In running, that choice is up to me, but as an improviser, I needed the rest of the troupe to go along.  The others in my troupe were hard workers, but they spread their efforts across standup, acting, and other activities, which made it hard to get together for more frequent rehearsals.

Another fact is that you get better by trying to keep up with people who are better than you are.  The talent gap can’t be enormous, or the more skilled person has to hold back to let the lesser performer keep up.  The gap between me and an improviser who’s good enough to get a regular gig was sizable.  It’s a lot easier for me to find runners near my level for me to train and compete with.  With running, sometimes I even get to be the more advanced partner!