Skip to content
Home » Blog » Journal » CCM: Well, at least that’s over with

Some workouts end up being less strenuous than expected.  Today, Ruth and I got up early to load up the bikes and head to Revere to meet up with our friends Mark and Karen Bates for the 52 mile Revere-to-Amesbury leg of the Cabot Community Tour, a ride up the East Coast Greenway.  Mark and Karen were intending to ride to the end of the tour in Portland, while we were just tagging along for the day.  We figured it wouldn’t be a hard ride, but we’d still finish by 1PM at the latest and have plenty of time to get some food and wander around Newburyport before we headed home.

As we were driving the almost deserted early-Fourth-of-July-morning streets through Malden, we came within a second or two of being t-boned at an intersecting by someone racing through a solid red light at 50 or 60 MPH.  That turned out to be an omen for how the day would go. 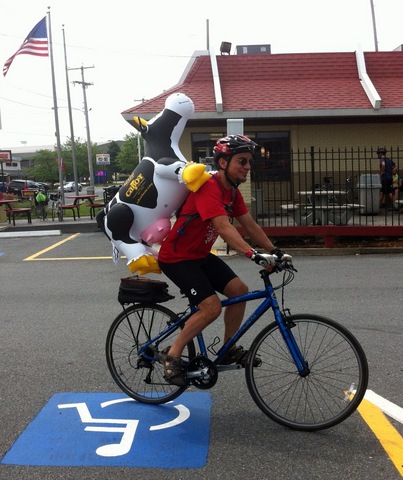 It was raining when we got to the hotel in Revere where the riders were staying.  The forecast called for the skies to clear in just a little while, so the 8AM start was delayed.  While we were waiting, I decided it would be fun to strap a 4-foot inflatable cow to my Camelbak and take it along for the ride.

At about 9AM, the 12 riders finally left the parking lot and turned uphill.  Almost instantly Karen lost her balance and did that slow “falling-damn-I-can’t-get-my-feet-out-of-the-clips” thing.  She popped back up, more embarrassed than hurt, and we meandered on, riding at a leisurely clip through back streets, heading toward Lynn and the coast.

We were in Lynn, about 5 miles into the trip, when Karen got a flat.  When we stopped to change the tire, she noticed that she had scraped her elbow more than she’d thought in the fall, so we had to patch that along with the tire.

And on we went, slowly.  In Massachusetts, the East Coast Greenway is mostly imaginary, so our path wound along secondary roads from one short bike path to another.  We paused for two more flats, including one on Karen’s spare bike, which she had lent to a friend named Mallory for the ride.  At three hours into the ride, Ruth looked at her odometer and noted, “I could have run this far in this time.” 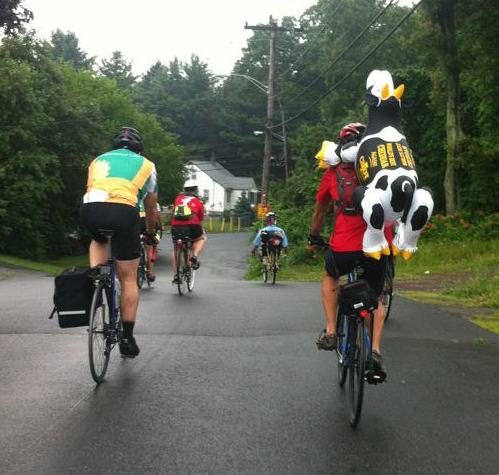 People did enjoy the cow on my back.  At the pace we were going, I had plenty of time to hear their comments.

We were in Salem, and after yet another pause I was following Karen down a short hill when all of a sudden she popped up in the air, flipped head-over-heels over the handlebar of her bike, and crashed to the road.  Almost instantly, while still tangled with her bike, she was yelling, “Damnit, I’m alright!”  But she wasn’t really.  Once the shock wore off, her shoulder started to hurt.  We called an ambulance, and while Karen and Mark rode off to get some x-rays, their bikes piled in the sag wagon, the rest of us continued on the ride.

The fun continued.  First Mallory got flats in both tires at the same time.  Clearly it was not a good day to be Karen, or even be gear owned by Karen.  Roberta, one of the tour staff, gave up her bike so Mallory could ride on.  This had the added benefit of removing the slowest rider from the group.

While we sorted all that out, David, a guy from the East Coast Greenway Alliance, showed up.  He rode with us into Peabody, and led us into a parking lot behind some run-down buildings.  We stopped in a cul-de-sac where a muddy trail went off into some trees.

David explained that he wanted us to pick up our bikes and walk through a half-mile or so of mud to where the improved section of trail began.  “Improved” only meant loose gravel, but the trail would continue to improve as we went on, becoming pavement at some point.  He wanted to take pictures of us in the mud so he could use them to try to provoke the local politicians to fund the remainder of the trail.

The pack balked at this.  People wearing bike shoes had no intention of walking a half-mile on a smooth sidewalk, let alone a muddy trail that would clog their clips.  The rest of us weren’t terribly interested in wading through mud, getting dirty, and then riding for another 25 or 30 miles.

Instead, we went off toward a condo development, which supposedly would allow us to bypass the mud and pick up the path.  Maybe so, but once we reached the end of the development, we realized that to reach the path, we’d have to bushwack down a fairly steep hill for a quarter-mile or so.  Again the pack balked, and we turned back, not sure what we’d do next.

We did something truly stupid.  While David went back to look at the mud, a local rider came along and we asked him what to do.  He took us under I95, off into West Peabody, and to a perfectly fine bike path, the Independence Greenway Trail, where he left us.  All well and good, except that the trail went west while our intended route went north. 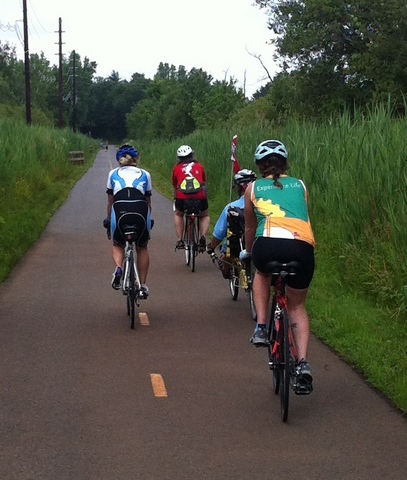 Some good came out of this.  We ended up in an area that Ruth was familiar with, so she took over leading the group, and we began rolling with more purpose.  After we left the path, we rode north into Middleton.  By this time it was 2PM. We’d only ridden 31 miles in 5 hours, but it was well-past time for lunch.  Options were limited because of the holiday, so we stopped at a Cumberland Farms gas station.

By this time, everyone was a little cranky.  I was tired of the cow, so I deflated it and then had a packaged egg salad sandwich while I called Mark.  The news was good.  Karen was battered, but not broken, and they were getting a ride from tour staff to the hotel at the end of the leg.

While we ate, Ruth planned how to get us back to Topsfield, where we could rejoin the original route.  Then the pack lurched back into action, rolling faster now that we had shed the slowest rider and were pedaling through less populated areas.   We still weren’t going very fast, there were still frequent pauses to bicker about directions, but we persevered.

Six hours, 45 minutes, and 42 miles into the trip, the low battery warning on my Garmin appeared.  I saved what I had, shut it off, and started RunKeeper on my phone to track the rest of the ride. This was historic.

We got to Topsfield after tacking 6 or 7 bonus miles on to the length of the trip.  Ruth retired from her leadership position and the endless ride continued.  There was one last stop at the head of a trail that was on the intended route, but was surfaced with packed dirt, and covered with weeds.   Once again, the pack balked.  While we argued, Mark called.  They were at the hotel, wondering where the hell we were. Thankfully, we were only a couple miles from Newburyport via the non-weedy roads, where we left the pack to pick up our car.

It was just before 5PM, which meant we’d ridden about 52.5 miles in a little under eight hours.  Usually a 52 mile bike workout is about equivalent to a 14-17 mile run.  Today, I figure it might have been about the same as a 14 mile walk, if I was lucky. 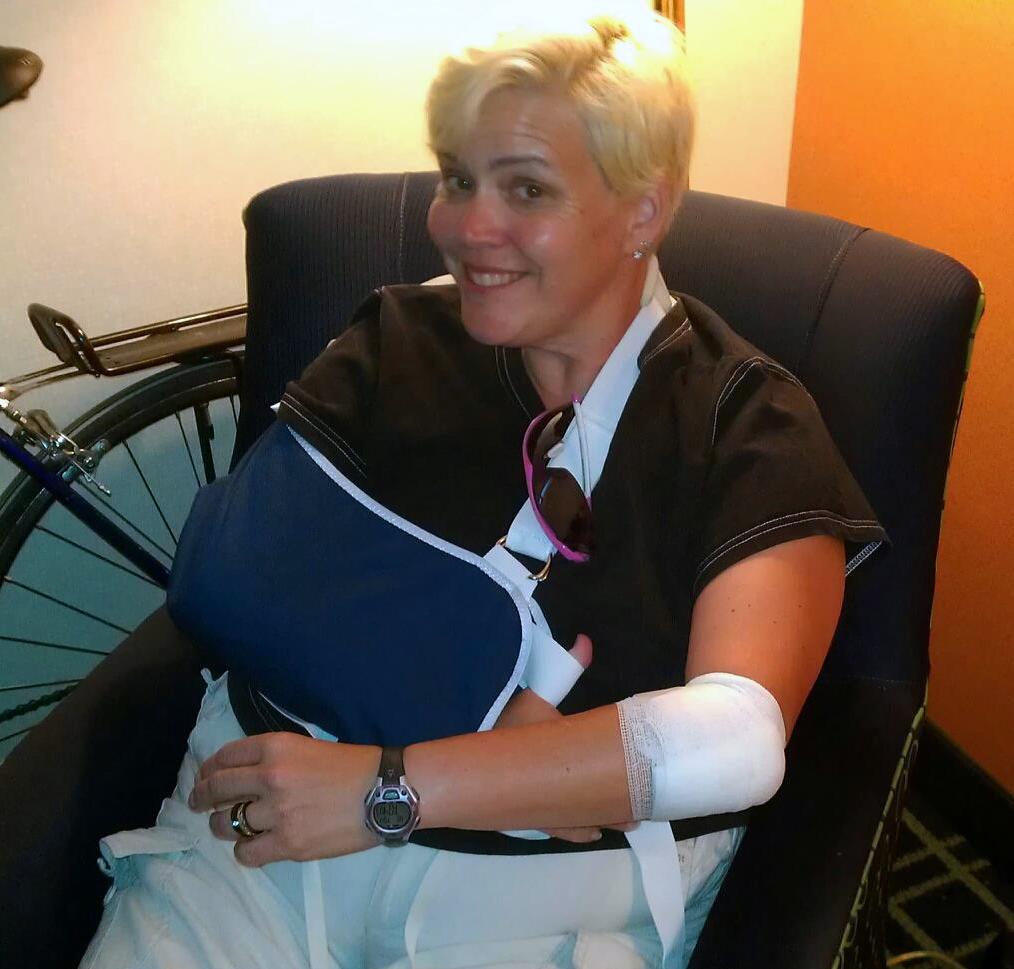 We loaded the bikes on the car, tired, but more a “spent all day out in the hot sun” tired than anything having to do with the actual ride.  We picked up Karen and Mark, Karen with one arm in a sling, the elbow on the other arm wrapped in gauze, swallowing Percocet and insisting that she would be able to ride the next day, and went out for dinner.  When we finally got home and unpacked so I could sit down to write this, it was getting dark and almost time for fireworks.  It might not be edited as carefully as usual, but it’s been a long day.

At least I won’t be too tired to run tomorrow.

One thought on “CCM: Well, at least that’s over with”