Racism gives people who aren’t racists an easy advantage.  It worked for the Dodgers in the 40’s and 50’s and it worked for Southern Illinois in 1960 when they won the National AAU Junior XC Championship: 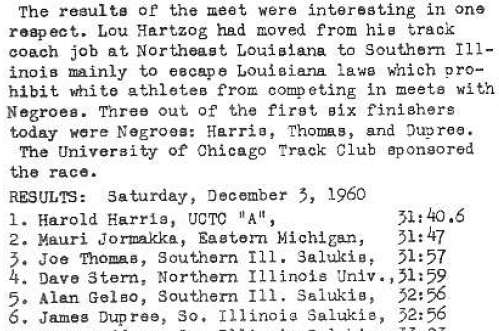 Hartzog was known for standing up to racism, and for his success.  He never lost a conference meet while at SIU, and he was named NCAA Division I Coach of the Year in 1982 and 1984.  His coaching helped 10 of his athletes make the US Olympic Team.

Hartzog retired in 1984.  SIU named their track after him and the USA Track & Field and Cross-Country Coaches Association picked Hartzog for their Hall of Fame in 2007.