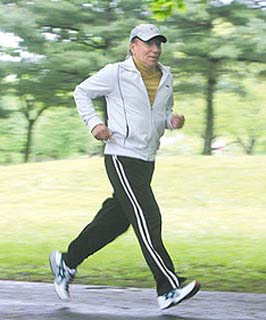 In 2009, Running Gazette published an interview with Tom Osler, a champion runner from the ’60’s and author of one of the best early training guides, the Serious Runner’s Handbook.  There’s some fun stuff on shoes and interesting looks at  other well-known figures in running history, like Bill Bowerman and George Sheehan.

The money quote is about how to run injury-free.

“After that [publishing his book] the only things that I can say that I have learned is that injury is caused by running hard when you are tired. I was just in Barnes and Noble and picked up Runners World. They had an article titled “Run Injury Free for the Rest of Your Life.” I looked at it and it was just baloney. Do this exercise…you are getting injured because your hips are this or that…It’s much simpler than that. You get injured because you are doing something your body just can’t take. You are running hard and you’re tired at the same time–that’s when you get hurt. If you don’t do that you’ll really cut down injuries. However the problem is that’s what a runner does in a race.  He gets tired at the end of a race and he runs hard. You’ve got to be cautious and sparing of what you do in a race. You have to realize that the final stages of a race are destructive.”

Elite runners can tolerate frequent speedwork, but that’s what makes them elite.  Most of us (non-elite runners) who want to improve are better served by avoiding speedwork, limiting all-out racing, and running more miles at a comfortable pace instead.  Speedwork should only be done in small doses just before the most important races, to sharpen up without getting overtired or breaking down.