Joe Henderson has done a ton of writing on running over the years, including a long stint as editor of Runner’s World and a column for Marathon & Beyond.  He’s a famous proponent of “long slow distance” (LSD) running,  something I picked up on when I started running, first as an excuse to lounge through my long runs, then as an essential part of my continuing survival as a distance runner.

I recently found this article by a 17-year old Joe, which I figured had to be his first: 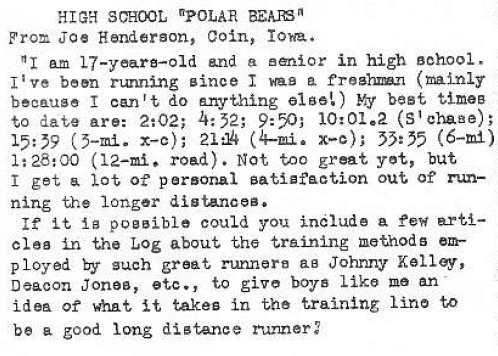 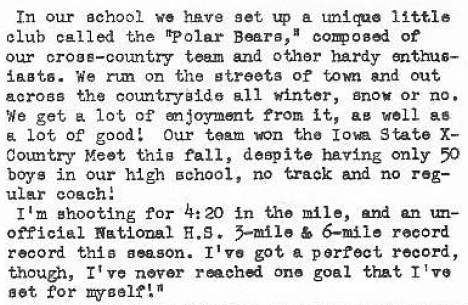 Joe’s retired, but he still posts articles from his archives weekly on his web site.  I emailed Joe, and he wrote back to confirm that, “The LDL note was my first appearance nationally. However, I began reporting high school sports for a local newspaper (in Iowa) in fall 1960.”

If you want to read more, Joe’s re-published many of his works in paper and as $2.99 ebooks on Amazon, Barnes & Noble, and as PDFs.  I just bought a copy of Starting Lines

, volume one of his memoirs, which covers how he got started as a writer and runner.

One thought on “Joe Henderson’s Debut”