On Saturday, I ran in the Adamant 20 Miler.  I was in Vermont to visit my mother for Mother’s Day and her birthday, but when my friend Mark mentioned that he was running this race as a final long run before the Vermont City Marathon, I figured I might as well jump in too. 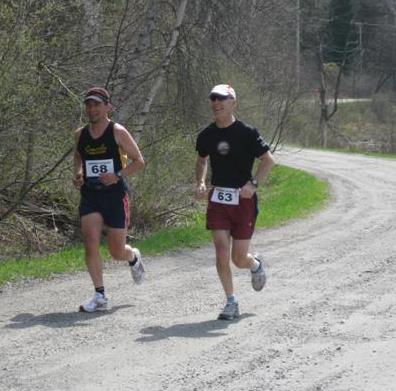 The race was put on by the Central Vermont Runners and hosted on the beautiful grounds of the Adamant Music School.  The forecast called for scattered showers, but it turned out to be a beautiful Vermont spring day.  And the course itself was beautiful, on quiet dirt roads winding past mountain streams and lakes.

The first two miles go out and back along Sodom Pond.  Then we went out through Calais, past Mirror Lake and Forest Lake.  The section at the start meant that when we reached the the turnaround on the long leg, we were at the 11 mile mark, more than halfway through the race.  I liked that.

The course was beautiful, but it was more than a little hilly.  This wasn’t a goal race, and I wasn’t fully rested going in, so when I hit the first long uphill in the third mile, I decided that the better part of valor called for me to avoid killing myself on the climbs.  I ran at a pretty even level of effort, and these were my splits (click on the image for easier reading):

I was 10th or 11th at the turnaround, but I managed to pass a few people on the return leg so I ended up 7th out of, well, more than 7 runners.

At the finish, we took advantage of one of the streams to cool down.  The water was colder than it looks.  I don’t think it was iced over that morning, but it may have been. 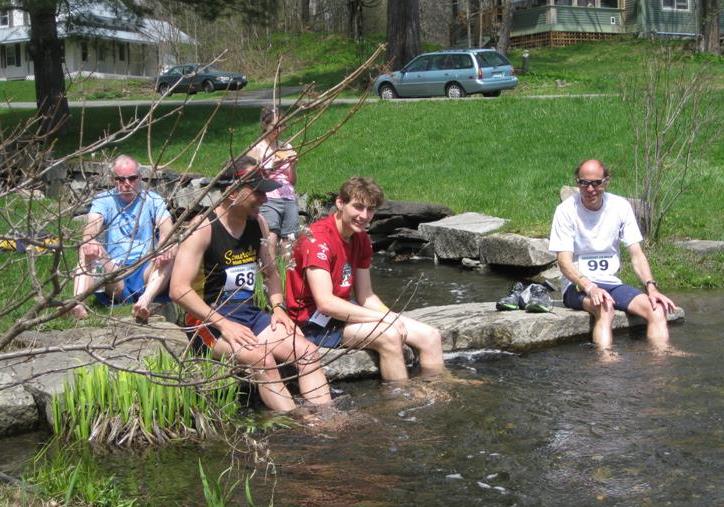 At the awards ceremony the winners got to choose from a good old fashioned prize table, which included a copy of Chasing the Runner’s High.  There were extra prizes, so I came home with a bag of Vermont Coffee Company beans for my effort.

To see more of the pictures Ruth took of the race and the school grounds and I took afterwards at the awards ceremony, click on the image below: