Skip to content
Home » Blog » Just a thought » Health care spending – US vs. the World

How effective is our current health care system?  We could easily do better by going to any other first-world country and copying their system.  Let’s run some numbers.

The charts below were all created using data from 2004/2005 provided by the United Nations Development Programme.  They all use estimated life expectancy as a metric for health.  The first chart plots life expectancy versus health care expenditures.

People in countries that spend more on medical treatment tend to have longer lives, but the biggest spenders don’t necessarily get the best results.

If you focus on the “first-world” countries at the top of the curve, defined as the countries where the life expectancy is 75 years or more, the correlation increases to .61. 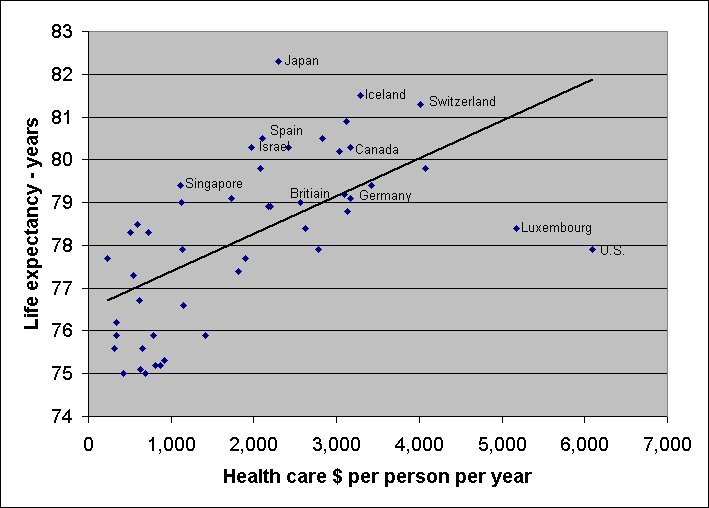 The trendline on the chart, calculated using linear regression, summarizes the data.  The countries furthest above the line get the most for their health care dollar, while those below are less effective. The biggest spender, the United States, has by far the least efficient health care system by this measure.  If you remove the US, the correlation between spending and life expectancy rises to a robust .69.

Japan ranks as the most efficient system.  Other countries that we often use as examples, like Britain, Canada, or Germany, all rank well above the US.  All these countries have universal health care systems.  Japan, Britain, and Canada all have single-payer systems, and are all more efficient than Germany, which has a multi-payer system closer to the US system, though the German government is still the primary source of insurance funding.

In health care, as in so many other things, it’s good to be rich.  Luckily, the United States is a wealthy country.  We have to be, because we do a miserable job of spending our wealth effectively.   To improve our health care, we don’t have to develop a new plan.  All we have to do is take one of the more effective ones from another country (the list is long) and copy it.  Ta-da!

5 thoughts on “Health care spending – US vs. the World”