Ruth and I were at the inaugural Half at the Hamptons, held on Sunday, February 10th.  Ruth’s first half-marathon was an eventful race.  For better or worse, she got to see the full range of triumph and tragedy that can befall runners when they put their training on the line and sign up for a road race.

The race, the second event in the LOCO “Will Run for Beer” race series, featured a flat, fast course.  There was a wet snow squall that lasted about 20 minutes, but other than that, the weather was pretty good, considering it was February on the New Hampshire seacoast.   The overall winners were Daniel Princic of Woburn, MA , who finished in a time of 1 hour, 14 minutes, 57 seconds and Tara Cardi of Warwick, R.I., who sped through the 13.1 miles in 1:25.  There were many other official winners, as the race split runners up into 5 year age groups and presented awards to the top three in each group. 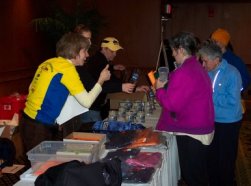 Other people won by meeting their personal goals.  Ruth was one such winner.  She had a range of goals for her first half-marathon, starting with simply finishing the race.  She was also targeting a 10 minute per mile pace, and looking to remain injury-free.  Ruth succeeded in reaching all those goals and more.  She ran a 2:06:33, which was a 9:40 pace.  She ran hard, but felt she had something left in the tank at the end.  The next day, she wasn’t excessively stiff or sore, and she was ready for an easy run on Tuesday.  And she even went home with a prize.  Out of all the women in her age group, she was the fastest first-time half-marathoner.  Her prize for that was a beer glass.

Many people had similar days.  They had goals, did the work to prepare, and when the race was over, they ended up with a shirt, a finisher’s medal, and the satisfaction that comes when your hard work pays off.  But some people didn’t do as well.  Maybe they didn’t do enough work to support their goals, or maybe they misjudged their pace, started out too fast, and ran out of gas as the miles passed.

Maybe they just had bad luck.  I was one of that group.  Somewhere after mile 10, my left calf began to hurt.  As I kept going, it rapidly got worse.  By the time I reached the 11 mile marker I had to choose between hopping on one leg for the last two miles, walking to the finish, or dropping out.  I’ve walked longer distances to finish races before, but I like to think I’m getting better at taking the long view.  In this case it was cold and wet and I wanted to get to the finish to get some pictures of Ruth, so I caught a ride from a passing car and massaged my calf in relative comfort while I rode to the finish.

There were people who had much worse luck.  One woman, Lynn Bova, had a very bad day through no fault of her own.  I was at the finish, waiting for Ruth to arrive.  During a lull in the stream of finishers, I noticed the scaffolding holding up the finish banner wobble slightly.  I didn’t see anyone leaning against it – maybe a gust of wind caught the banner, though the high winds that were in the forecast did not show up for the most part.  I looked down the course, and saw a woman approaching the chip sensor mats.  From there, events proceeded rapidly, too rapidly for anyone to do anything to prevent them.  Just as Bova crossed the line, the top half of the scaffolding separated from the base and toppling sideways, carried the whole structure over.  People watching yelled for Bova to look out, but she was focused on finishing her race.  All she had time to do was look up before a crossbar hit her on the head, and she was knocked down by the falling steel.   Spectators pulled the scaffolding off her and pulled out cell phones to call in emergency medical support.  In the meantime, the race continued.  Bova had to stay there, lying on the mat to avoid any further injury that moving her might cause.  I helped direct runners around where she lay, pointing them to the third of the chip mat that was still free.  As things settled down, I moved back to where I could get Ruth’s picture when she finished.

Ruth was so focused on finishing that she barely noticed the group huddled mat as she went by, other than to wonder where it was she needed to go.   I caught up with Ruth as she walked down the chute, basking in her personal victory.  I helped remove her chip, then we exchanged it for a finishers medal and headed off to the car to get dry clothes.  As we walked down the street, rescue personnel arrived on fire trucks, sirens blaring.  They took Bova off to the hospital.  Later, race officials reported that she had needed surgery on her ankle, but that doctors expected a full recovery.

Another runner had the worst day possible.  55 year old Bill Paradis collapsed about halfway through the race.  According to news reports, Paradis had been running Sunday’s race with his friend, Diane Levesque, and was complaining that he couldn’t catch his breath. Not long afterwards, Paradis went down.  Paradis had run multiple marathons and was an avid cyclist. He knew what he had to do to be prepared for the half-marathon, but that doesn’t always matter.  Ruth ran by as people were performing CPR on Paradis by the side of the course while waiting for an ambulance to arrive.  That’s never a good sign, so she feared the worst.  We were discussing what might have happened at the post-race party.  The next day, I read that paramedics were unable to revive Paradis.  He had died of an apparent heart attack. 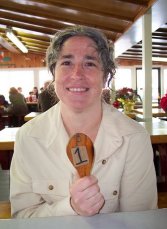 After the race, Ruth was caught up in the euphoria brought on by her success.  We went out for lobster, and the day was topped off when we were given number 1 as the number they would call when our dinners were ready.  I was happy for her, and her reaction helped me remember how rewarding it was to discover that you were capable of physical feats you thought were reserved for “real athletes”.  But I couldn’t forget those who had found that tragedy can strike at any time, even at a moment of triumph, or in the midst of a pleasant diversion from your daily cares.  The 2008 Half at the Hamptons was a clear reminder that you should live each day to the fullest while you can.

4 thoughts on “Triumph and Tragedy at the Hamptons”