New from Y42K Publishing Services: The Classics Slacker Reads Moby Dick! Now available in paperback and Kindle editions, and at your favorite non-Amazon ebook vendors too! 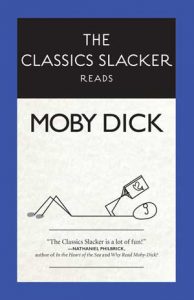 You probably know the basic plot of “Moby Dick”. Deranged ship’s captain seeks revenge on a white whale that ate his leg. Sounds like a great story, right? But you’ve also heard that it’s crazy long and boring? Not to worry. “The Classic Slacker Reads Moby Dick” contains all the whale blubber, all the bromances, and all the amputees that appear in Herman Melville’s classic novel in one slim, easy-to-carry volume. Fully illustrated, too!

You’ll enjoy “The Classics Slacker Reads Moby Dick” so much, you might even want to read the whole book yourself. But probably not.