There are plenty of scammers on Craigslist, but they’re not exactly criminal masterminds. Use a bit of common sense and you’ll be safe.

On April 11, I posted a laptop computer for sale on Craigslist: 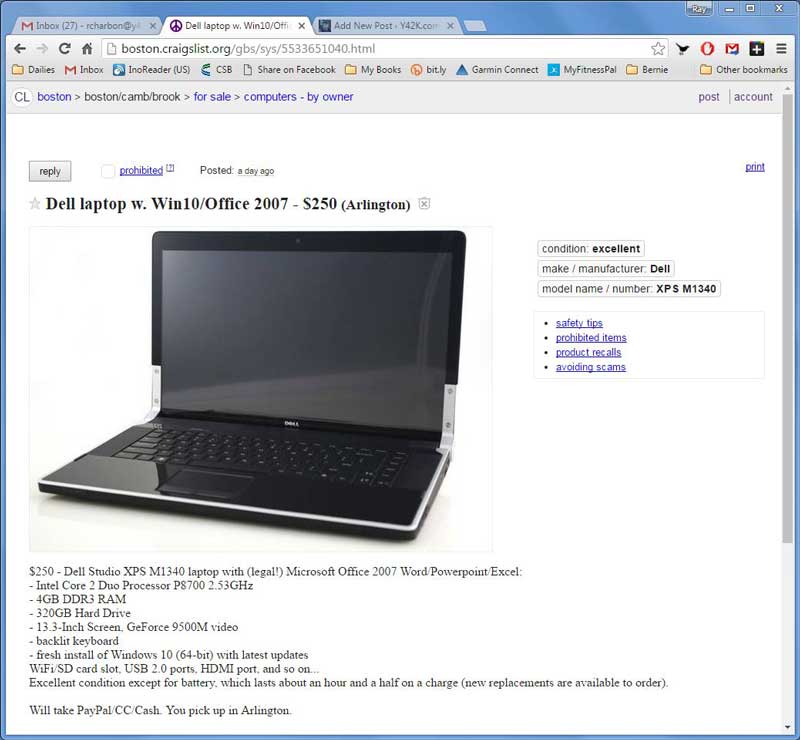 It’s a decent laptop – the only real issue is the battery life. $250 is a good price, considering it runs Windows 10 and comes with a legal (yes, really!) copy of MS Office. A couple hours later, I got my first response:

This is already suspicious. Poorly written English can come from anywhere, but while the name “dipson olaleye” may be common enough to use as an alias somewhere, that place isn’t Massachusetts. Maybe in one of the African countries that scammers work from, safely out of range of US law? Then he asks about the condition, which was described in the ad (scammers work through ads in bulk, without actually reading them).

The only way to ensure that you don’t get ripped off making a purchase on Craigslist is to insist on conducting the sale in person. However, after a few more messages back and forth, Dipson says he’ll pay via PayPal and asks me to ship the computer, which confirms that he is a scammer.

Now I’m just replying to see how far it will go. I ask for the shipping address, and the next day Dipson sends this:

I suppose “Tammy Nickerson” could be Dipson Olaleye’s child. However, notice how his ‘son’ has turned into a daughter. And then there’s the address. At least he got the “zipecode” for Temple, TX right.

Soon after, I get a message from PayPal, well ‘PayPal’: 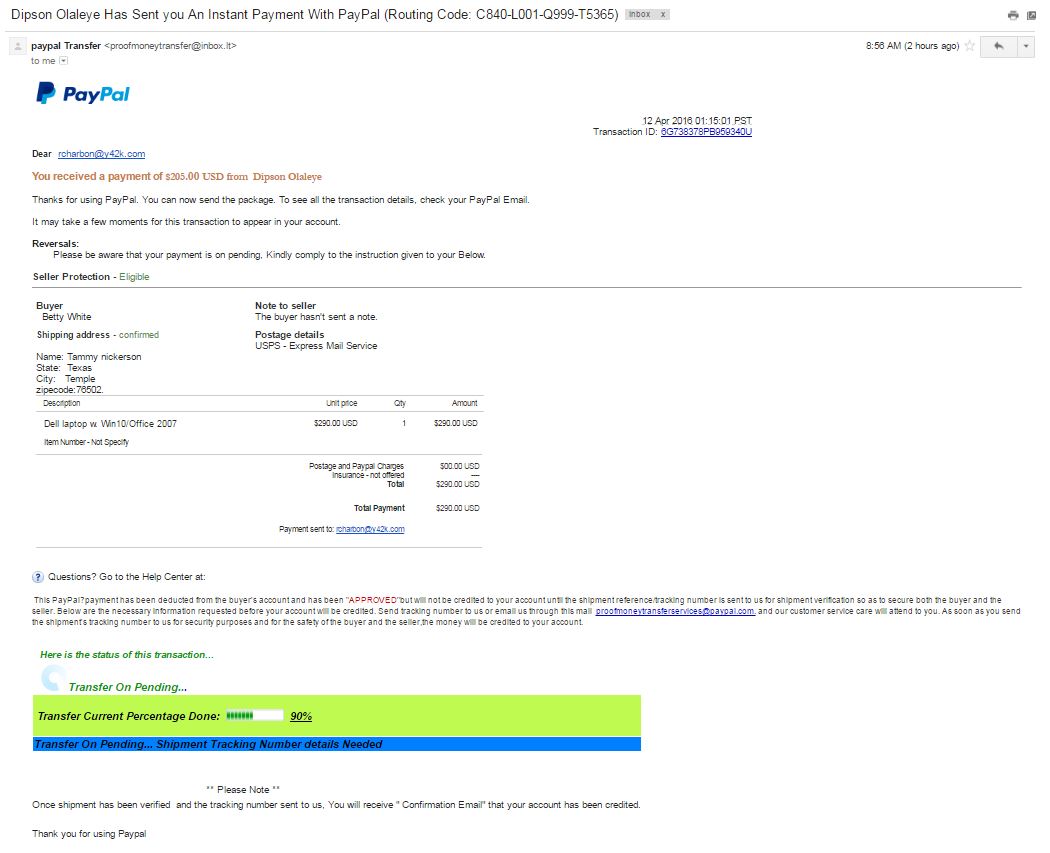 There are so many problems with this message that I’d be amazed if it could fool anyone. You can see most of them for yourself, but I’ll point out a few:

Note the email address in the body of the message. It says “proofmoneytransferservices@paypal.com”, but when you mouse-over the link, my browser revealed the true address in the lower left, our friend from ‘inbox.lt’. 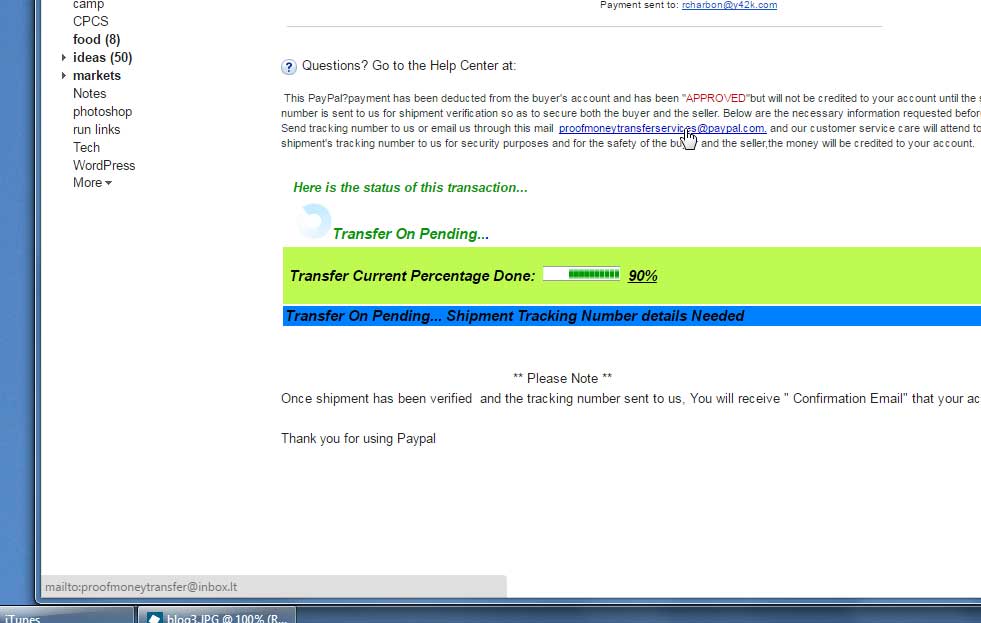 I also got this: 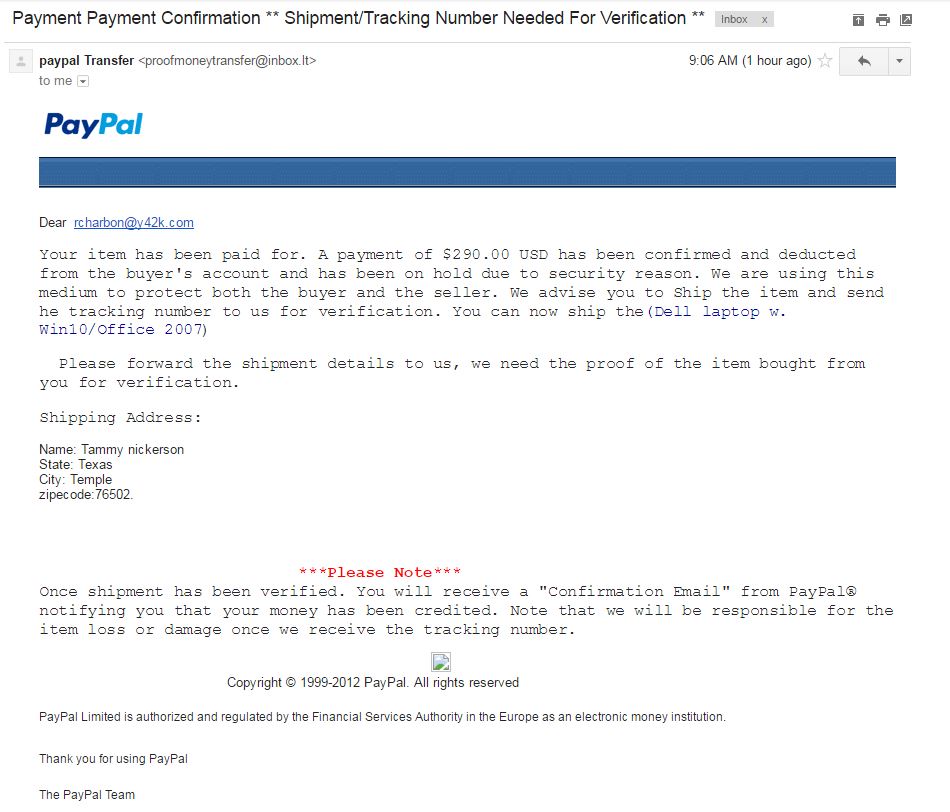 Just for fun, I Googled “UPS shipping receipt”, photoshopped it a bit, and sent it along. It’s not perfect, but it’s a lot better than those PayPal messages were: 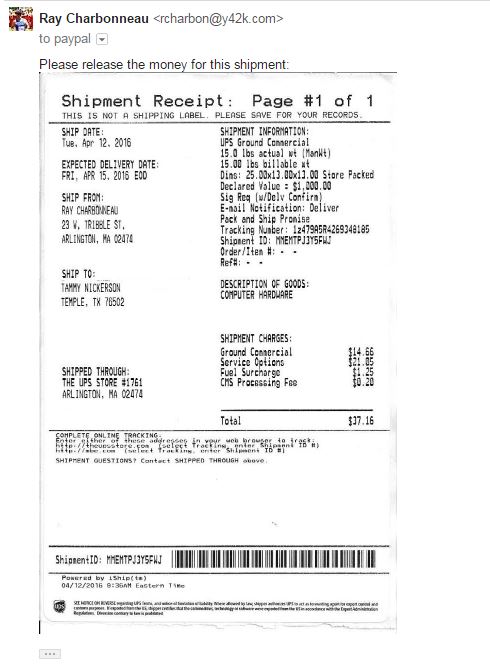 A few more messages back and forth, and here’s my money!

I’m sure that it will show up. I just need to wait patiently. 😉

The next morning, I get this:

Another day passes. Then Disson tries to increase the pressure by going full caps-lock:

Maybe I can get him to send a real address:

This scamming thing appears to be hard for Dipson, so I try to help him out:

Which at least gets him to stop YELLING:

At this point, I’m bored, so I let it drop. Four days later, Dipson makes one last try:

I still have no idea how Dipson expects to profit from getting people to send packages to bad addresses.