Last week I learned that the house at 56 Palmer St. (about .3 miles from my house in Arlington, MA) was where John A. Kelley (the Elder) lived when he was growing up. Kelley ran the Boston Marathon 61 times, winning in 1935 and 1945. 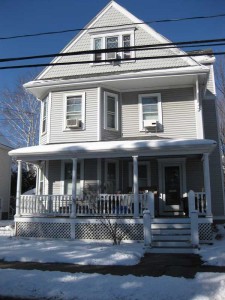 Kelly was born in West Medford, then his family moved across the Mystic River to the Palmer St. home in nearby Arlington, where Kelly ran track and cross-country for Arlington High. He lived in Arlington until 1972, when he retired from his job at Boston Edison and moved to East Dennis on Cape Cod.

Even better, 1957 Boston Marathon winner John J. Kelley (known as ‘Johnny the Younger’ to avoid confusion – the two men were not related) stayed with Johnny the Elder in Arlington the night before his win, according to Amby Burfoot. Two marathon-winning John Kelleys in one house!

One thought on “#tbt: Johnny (the Elder) Kelley’s Arlington home”