Runner’s World recently published a look at a new approach to age-grading marathon times. Age-grading is a method that allows you to compare race times for runners of different ages on a level playing field. It does that by comparing race results to a curve that represents the world-record time for the distance at each age. You take the projected world-record time for your age and divide it by your actual time to get your age-graded score.

In the past, age-grading formulas have determined that world-record curve by taking the records at each individual age and calculating the curve that makes for the best fit for all the data. But as researcher Paul Vanderburgh pointed out, it makes more sense to cherry-pick only the fastest records to build the curve. 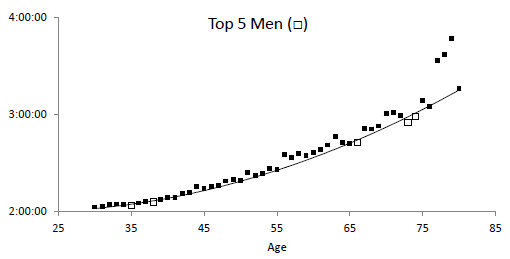 This method has the effect of flattening the curve, reducing the handicap given to the oldest runners. Even so, a chart of the best age-graded performances in the Runner’s World article shows a preponderance of older runners, indicating that Vanderburgh’s method might still not go far enough.

But enough of that. The important question is, how does this new method affect ME? Answer: at my age, not much.