One of my long-term running goals is to be a long-term runner. With any luck, I’ll find a way to keep running into my 70s and beyond, following in the footsteps first laid down by people like Gardner Spooner.

Gardner Spooner was born in 1887. Growing up, he played baseball, soccer, football, and ice hockey every weekend, even though he was born without a right hand.

Spooner started running when he was 50. He turned to competitive racing when the cycling events he had been competing in shut down because of World War II. His first Boston Marathon was in 1941; he ran the race 15 times (finishing 12). He had his best finish in 1945 at age 57 (33rd, in 3:37). Some of his later Bostons were unofficial after the BAA deemed him “too old”.

In November, 1963, the then 70 -year old Spooner started the North Medford Club’s 10-mile race in Haverhill, MA. When he didn’t show up at the end, race officials started searching. They found him off-course, but still running for the finish line. The article (below) has Spooner more than an hour behind the second-to-last finisher; the results have him only about 22 minutes behind. 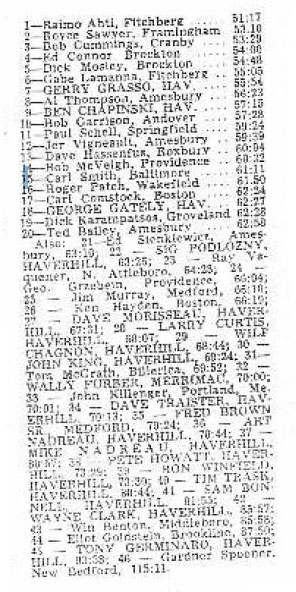 In 1969, Spooner was out for a run in his hometown of New Bedford when he collapsed and died from a heart attack at age 81. This past October, the Greater New Bedford Track Club held the 36th annual Spooner 10K in his memory.