In 1917, when Glenn Cunningham was eight, his legs were very badly burned in an explosion. He lost all the flesh on his knees and shins, the toes on his left foot, and his transverse arch was practically destroyed. When the doctors recommended amputating Glenn’s legs, he was so upset that his parents would not allow it. The doctors predicted he might never walk normally again.

In the 1930’s, Glenn Cunningham set world records in the 800 meters and the mile and was a two-time US Olympian. 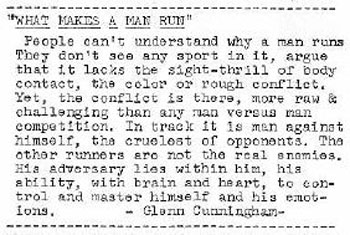 One thought on “#tbt – Glenn Cunningham on ‘Why a Man Runs’”