After the time I returned to the bike rack in Davis Square to find only a neatly sheared cable lock remaining where my bike used to be, I’ve been using a U-lock to secure my bike.

Unfortunately, a U-lock that’s big enough to be useful is big enough to be a pain to carry around. The locks come with a mount that straps to the frame, but unless you have a large bike there’s no good place to put it.

Ruth’s Topeak rack came with a lock that slides underneath the deck of the rack when she’s not using it. It’s just about ideal, so of course they don’t make it any more. 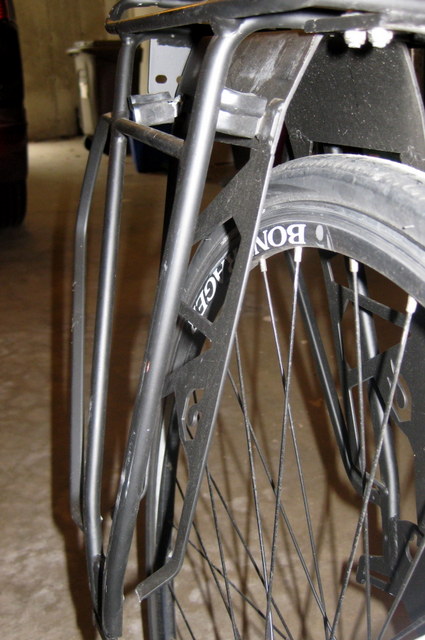 The peg broke off on the way to pick up the tote.

I Googled “u-lock mount“, “u-lock pouch“, and “u-lock rack“. None of the options looked all that great. I decided on a Blackburn rack with a metal bracket designed to hold a U-lock.

After I attached the rack to my bike, I found that the lock rattled around in the bracket while I rode. That was annoying but not a major problem.

However, after only a few hundred miles, the welds that tack the inner panel of the lock bracket to the rest of the frame broke, leaving the panel and the lock free to flop around, banging even louder and endangering my spokes.

Also, the metal peg that adjusts to fit each specific lock bent under the stress of holding up the bouncing lock. I could feel the peg getting weaker each time I bent it back.

My temporary solution was to bungee the whole thing together. Of course, if I wanted to do that, I wouldn’t need a rack with a special lock bracket in the first place.

It turns out that I should have searched for “u-lock tote“.

Ruth and I went to West Medford Open Studios last weekend. One exhibitor was Dill Pickle, a company run by Emily, who makes bike gear of her own design in Somerville. 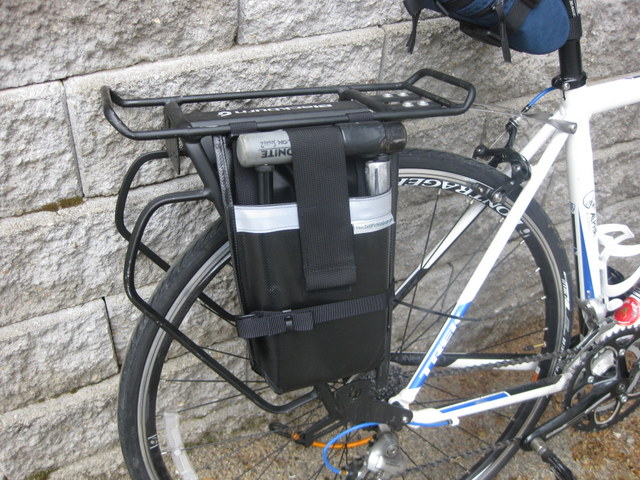 One of Emily’s products is a U-lock tote. When I strapped it to my bike, the tote did a great job of holding my lock and keeping it from bouncing and clattering against the rack and frame without adding too much weight or bulk.

For daily use, I’ll leave the tote strapped to the outside of the rack. If I want to use my panniers, the tote can be attached out of the way on the inside of the frame, in the original Blackburn bracket.

2 thoughts on “Carrying that U-Lock”