On April 15, 2013, the Tsarnaev brothers set off two bombs at the finish line of the Boston Marathon. Here we are, one year later, overwhelmed with memorial events, commentators, and articles struggling to put it all in perspective. Ready or not, here’s another.

My name doesn’t show up in the results from last year because I was guiding Mike, a visually-impaired runner from Texas. We crossed the finish line on Boylston St. just under 4 hours after leaving Hopkinton. Of course, the end of the race wasn’t the end of the story, not for hours, not that day. 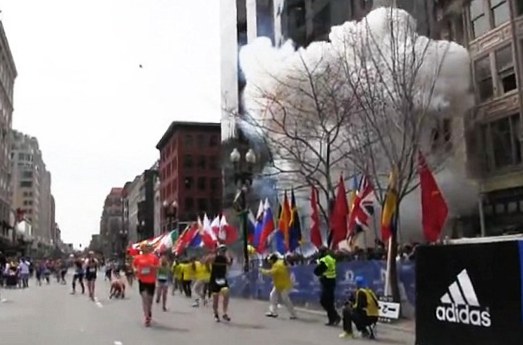 Seven minutes later, at 2:49, we were maybe 50 yards past the finish, freshly bemedaled and moving slowly forward in step with the rest of the crowd, when we heard a loud bang. I turned to see greasy grey smoke rising from the other side of the line. None of us, especially the blind guy, knew for sure what had happened. Gas explosion? TV power transformer? A bomb?

Then the second explosion went off. We didn’t know yet that they were bombs. But we knew.

Much later, after miles of walking and hours of uncertainty, Mike was on a plane heading back home and a flurry of emails and text messages had confirmed that everyone we knew was safe.

My focus that day was on doing the next thing to make sure Mike and, to the extent possible, everyone else was OK. After that, I was overwhelmed by exhaustion. The one thing I knew for sure was that I would be back for the 2014 race if I had anything to say about it.

Once the bombers were caught, I thought it would be like after 9/11; something horrible had happened, but my day-to-day life would soon go back to normal. That wasn’t the case. For weeks following the bombing, I had trouble sleeping and I flinched every time I heard a siren or a loud noise off in the distance.

The problems lasted for a month after the marathon, until we went to see Iron Man 3 at the IMAX theater in Reading, a theater with a powerful sound system  and “butt kickers” built into the seats. The movie’s first few explosions had me fearing that it would all be too much to take. But by the end of the movie, after relentless series of blasts, I was taking them in stride. The worst of my reaction was over after that. Apparently, the immersion therapy helped me settle down.

Since then, denial, or avoidance at least, has been my main tool in dealing with ongoing reminders about the marathon bombing.

It hasn’t been easy to bury the feelings. I’ve skipped reading most of the articles and I’ve only watched snippets of the video from the scene. When I wrote an article about guiding Mike, I left out the aftermath of the bombing, choosing to focus on what in conversation I usually label as, “a great day, until the bombs went off.”

The stories in the media often seem like people pontificating to get attention, make money, or fill the airwaves with chatter about the latest sensation. For the most part, they’re just people doing their job, often while honestly working through their own feelings. I’m still annoyed by much of it, especially the security theater, but I know that’s just my personal defense mechanism.

That makes it especially ironic that I’ve spent a good chunk of the last year discussing the bombing to promote the One Fund benefit anthology (obligatory link) I put together. The inherent contradictions between that effort, and for that matter writing this piece, and the way I feel about other reminders of the bombing aren’t always comfortable for me.

On the other hand, I’ve been genuinely touched by some of the things people have done, starting with the living memorial that arose spontaneously in Copley Square after the race. The sanitized version currently on display at the Boston Public Library isn’t as powerful, but I was still moved, almost to tears, when I turned a corner and saw the crosses memorializing the four who died.

I also get a little emotional at unpredictable moments when something causes me to reflect on how close I came to dying. Seven minutes isn’t much. A blister or one porta-potty break, and Mike or I could have first-hand memories of bloodshed to deal with, or worse, crossed the finish in the arms of a fireman instead of on foot.

My most fervent desire for the 2014 Boston Marathon was that it would be just another race. That, of course, was never going to happen.

Yet Monday, in spite of everything, I’m going back to Hopkinton, this time under my own name as a qualified runner. 9/11 didn’t keep me from flying; the marathon bombing won’t keep me from lining up in Hopkinton. I’m not doing it to prove anything to anyone – running is just what I do.

I can’t imagine ever understanding how anyone could think that killing random bystanders at a public event would ever solve anything. The knowledge that these people exist is nothing new – ask anyone in Ireland or Israel, or in New York City for that matter. But until the marathon bombing, it was all at a distance, something only in the news or on TV.

My nature is to try to explain things and to solve problems by following logical processes to the best of my ability wherever they might take me. That won’t work here. The actions of the Tsarnaev brothers are just as inexplicable today as they were while I was standing in the finish corral with Mike, watching the smoke rise.

So I’m going to Hopkinton a little confused, wondering what I‘m going to feel when I’m standing at the starting line. I know there’s no right way to feel, no one thing that I, or anyone else, should be experiencing in this situation. My denial isn’t strong enough to believe that I won’t feel something. With luck, maybe some sense of resolution. I guess I’ll find out when I get there.