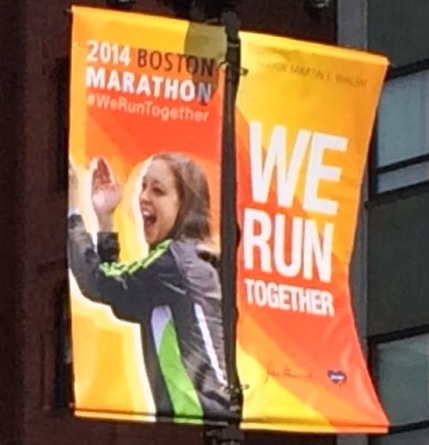 In a couple of weeks, the BAA will bring out their Unicorn banners for the 118th time to mark the start of the 2014 Boston Marathon. Those of us running the race are in taper mode, which leaves us time to discuss the issues of the day, and gives us the need to discuss those issues to distract us from the wait for Patriots’ Day.

One question that’s always open for discussion is, “Who’s the greatest Boston Marathon runner of all time?” It’s not an easy choice. There are just too many great runners and too many things to take into consideration. But that never stops people from having an opinion.

Ideally, we can agree on a set of objective criteria to use to help us pick one Boston Marathon runner as the Greatest Of All Time (GOAT). We all have our subjective favorites. Runners my age are likely to favor Boston Billy, while barefoot running fans might favor Tarzan Brown, who won in 1935, even though his shoes fell apart at mile 21. But marathon racing isn’t subjective – the first to cross the line is always the winner. We should mirror that as much as possible in our search for the greatest marathoner.

First of all, to be the GOAT clearly you have to be the GOOD, Greatest On One Day. You can’t be the best Boston Marathoner ever without winning the race at least once. And it’s Boston you have to win. In this case, all that matters is what you do between Hopkinton and Boylston Street, not what you do in some other marathon.

Some of becoming the GOAT is just luck. You don’t become the GOAT solely via effort. Obviously, you can’t win Boston without training hard, but the runner who works the hardest and gets the most out of his potential could be the runner who finishes in 8675th place. You have to be born with the proper physical gifts.

Unfortunately, that lets out all the women. As great as Rosa Mota, Uta Pippig, and Catherine Ndereba have been, they were never the fastest runner on the course on any Patriots’ Day. Call me sexist if you want, but when a woman beats me (happens all the time!) it counts. When choosing the GOAT, the converse is also true.

That also lets out most of the age-groupers. Come back to me when you win at age 41, like Clarence DeMar did.

I also leave out Ernst van Dyk, Jean Driscoll, and the other fine wheelchair racers. I admire them greatly, but racing in a wheelchair doesn’t compare directly with running.

To me, the choice for GOAT comes down to three people: Geoffrey Mutai, Clarence DeMar, and Robert Kipkoech Cheruiyot.

Mutati’s claim to the GOAT title is based on his record finish of 2:03:02 in 2011. For many people, it’s just that simple – the fastest runner is the greatest runner. And that’s not unreasonable.

But a lot of things can affect race times on any particular day. The weather and the level of competition have an enormous impact. And winning race times in general are getting faster, due to modern training methods, equipment, and lifestyle changes. Is it fair to mark Clarence DeMar down because he had to hold a full time job in addition to training for marathons?

Also, when picking a GOAT, shouldn’t we consider not just “how fast” but “how often”? Sustained excellence should count for something.

That’s where Clarence DeMar’s claim is strongest. DeMar won Boston 7 times between 1911 and 1930. 16 men have won Boston more than once, but only DeMar has won it more than 4 times.

However, back when DeMar was winning, Boston was a much smaller race. In those days, the sport of running was much less popular than it is today. On top of that, commercial air travel was still in its infancy – Charles Lindbergh’s Atlantic crossing was in 1927. Merely getting to Boston was a major challenge for most runners.

The travel required a significant time commitment in itself, and got in the way of final preparations for racing. And since races were limited to amateurs, the expense of traveling to Boston was often enough to keep a prospective runner away.

So the size of the field when DeMar was winning Boston was limited to one or two hundred runners. His competition just wasn’t as strong as Mutai’s or other modern runners.

Perhaps the GOAT should be someone who fits both criteria – a multiple winner with a fast time.

All three men who have won Boston four times, Bill Rodgers, Gérard Côté , and Robert Kipkoech Cheruiyot, set the course record in at least one of their victories. Of the three, Cheruiyot ran the fastest and beat the largest, most inclusive, fields.

We could consider other things, like multiple high placements for runners in years when they did not win. Maybe if I had all the data I could do something fancy with trends, standard deviations, and regressions, and develop a formula to choose among these men. I might even discover that the numbers pick someone else as the GOAT. But failing that, and in spite of the solid arguments you can make for all three men, I’m happy with the choice of Robert Kipkoech Cheruiyot as the greatest Boston Marathoner of all time.

Who’s your choice for the GOAT? Leave your pick in the comments!