Sunday, Ruth and I continued our anniversary weekend with a nice breakfast at the hotel followed by a morning of lounging in our room.  A little after 10AM we started to pack to leave for the Kerouac 5K.  While I was packing, I realized that I didn’t have my Crow Athletics cap.  I have a dozen more baseball caps at home, but I was fond of that particular hat in the irrational way I grow fond of certain items of gear, so I was upset to lose it.  Luckily I knew where it had to be.  I’d worn it when we went to Centro for dinner the night before.  I clearly remembered hanging it on the back of my chair under my jacket so I wouldn’t forget when I got up to leave.  Like so many similar efforts in the past, this one failed miserably.

I called Centro and found that they don’t open until 4 o’clock on Sundays.  We would be home by then, so we decided we’d stop by the restaurant after the race, hoping that someone would be there early getting ready for the evening.

We checked out and made the short drive to the Brewery Exchange.  We arrived early, about an hour and a half before the race.  It was in the 50’s and raining when we got there, the sort of day that’s good for running but awful for standing around outside.  Since we were early, we were able to pick up our numbers and grab a comfortable spot on one of the couches in the bar to wait inside where it was warm and dry.

At about 11:20, I left the bar to run the course for a warm-up.  When I got back, I went to the car for a drink of water and then jogged to the start to find Ruth and wish her luck.

When it was time to line up for the start, I was still telling myself I was going to go out at a 7:30 pace and use the Kerouac as a tempo run to train for Cape Cod.  Whenever I saw someone I knew that was faster than 7:30, I moved behind them.  In a USATF Grand Prix race, I know a lot of people, and a lot of them are fast.  I was still moving back through the crowded pack of more than 700 runners, when the gun went off at noon.

The year we got married, the course started downtown and climbed Fort Hill before turning back to the finish.  Now it’s a flat loop along the Merrimack River, a much faster route.  I took it easy at the start and waited for the pack to stretch out before I started to pick up my pace a little bit.  I moved up to a comfortable level of effort and began to pass a few people.  I knew I was going a little faster than tempo pace but I didn’t feel like I was running very hard, so I was surprised when my split for the first mile was only a little over 6:40.

Now I had a choice to make.  I know myself well enough to know that less than four weeks before Cape Cod, it would be foolish for me to run a hard race and follow it closely with a hard track workout.  If I wanted to do my track workout this week, I needed to slow down.  But slowing down would mean I’d spend the rest of the race watching people go by, and that’s no fun at all.

On the other hand, I was running well and having fun.  I could speed up, and who knows?  Maybe I’d score for the team in the Grand Prix.  The idea was tempting, but I knew I could kill my marathon with a foolish sprint to the finish.  Besides, we’ve only got four 50+ men signed up for the marathon, so I’d be much more likely to help the team by holding back in the 5K in the hope of running well at Cape Cod.

So I made a deal with myself.  I’d let myself keep racing as long as I promised to stick to a reasonable level of effort, hard but not all-out.  I’d keep running, hold my form, get in a good workout, and enjoy the day.  Then I’d take the week off from track to make sure I didn’t overdo it. 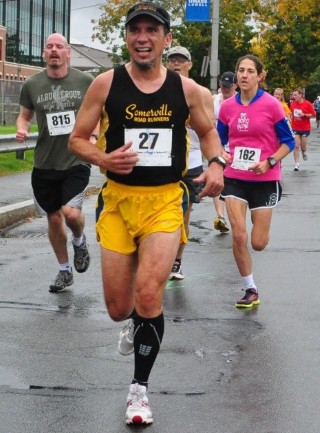 Maybe that was a timid choice (I prefer “prudent”), but that’s what I did.  I kept my effort at a fast cruise while the course got a little more difficult, so my pace dropped from 6:42 to around 6:55 over the last 2 miles and I finished in 21:23.

That’s not particularly fast, but even though I didn’t go all-out it was still only 12 seconds off my fastest time of the year.  Besides, I was coming off tired legs on Thursday and a big sausage omelette breakfast.  And I was wearing my floppy black singlet instead of my sleek yellow singlet, which has to have cost me a few seconds.

OK, it’s still not particularly fast.  I didn’t factor into the scoring for the team.  The SRR 50+ men did quite well without me, finishing second to Whirlaway.  Greater Lowell was third and Winner’s Circle was fifth so we are now tied with Greater Lowell for second going into the last race of the Grand Prix at Cape Cod.

Ruth did score for the team.  Her 25:45 made her the second runner on SRR’s 50+ women’s team, which finished sixth.  More importantly, her time was a 5K PR by 10 seconds.

After the race Ruth and I hung around the Brewery Exchange to discuss the race with our friends.  I was pleased to have Erin Lynch tell me she was at the Stockholm Marathon reading a copy of Distance Running magazine when she was surprised to see her own name in the article I wrote for them.  The magazine is only distributed at international marathons, so Erin was the first person I’ve met that has actually seen the article.

Ruth and I finished up our race day the same way we did the day after our wedding, with a hamburger at Hookslide Kelly’s.  Afterwards, we walked by Centro on the way back to our car.  It was still closed, but there in the window, sitting on the hostess stand, was my Crow Athletics cap.  I got the attention of someone inside who unlocked the door and returned the hat to me.  That, along with the brownies we had to celebrate Ruth’s PR, capped (!) off our excellent anniversary weekend.