Back to the track today. I’ve managed to avoid hurting myself so far, so I’m sticking with the plan that has me adding additional intervals slowly. That meant six 800 meter intervals for me this morning.

I did decide to speed things up a little and shoot for 3:25 per 800 meters instead of 3:28. 3:28’s haven’t been that hard for me, more a matter of hitting the correct pace than putting in a hard effort. I’m still concerned about risking injury if I push the pace too much and my form starts to get sloppy, but I figured shaving the pace down to 3:25 would be fine.

The temperature when I left for the track was only in the 60s, and I figured that would help. It was also a Probable Bunny Day. I thought I saw a rabbit dashing across the street as I started my warmup jog to the track, but I was wearing my sunglasses with the older prescription. It could have been a squirrel, but I’m pretty sure I saw the long ears. 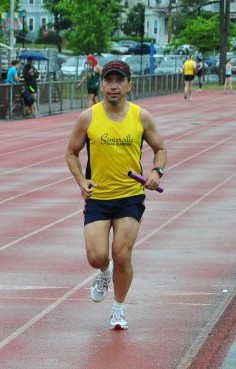 Those times were quicker than I had intended, but they felt good. I had to work a little more to hold the pace on the last interval, but that’s how an interval workout is supposed to go. It certainly wasn’t more than my cardio-vascular system could handle, even with the fast first interval. If I compare today’s effort with my last interval session, my average and maximum heart rates were almost exactly the same.  By that measure I didn’t have to work any harder to go faster and farther.

On the other hand, though I could go even faster if I wanted, this isn’t supposed to be about running the intervals as fast as I can. It’s supposed to be about getting ready for Cape Cod without getting hurt. I don’t think I overdid it, but my back reminded me to be careful on the fourth interval and it jabbed me a few more times during my cooldown jog home.

Still, I have to admit that it does my ego good to be doing my intervals at a faster pace. 3:25 to 3:28 was essentially my 5K pace before I started track workouts.  Now that I’ve put in some time on the track, 800 meters at that pace feels a little like slacking off.  I’d like to think it’s because I’m already in better shape, but I suspect I need to give a share of the credit to the cooler weather.  That’s OK – with any luck it’ll be even cooler in October.