My legs were still a little tired on Saturday’s 8 mile run, but nothing that’ll stop me from going back to the track Tuesday.  And my “comfortable” pace was easily under 9 minutes/mile, which is encouraging.  Training (and slightly cooler weather) pays off.  My left hip is still a little annoyed, but not enough to make me change my plans – yet.

The Olympics have started, which means I’ll be watching more TV than usual for the next few weeks. The opening ceremony was Friday night, while Ruth and I were at Alison’s for dinner with some of Ruth’s running crew. NBC didn’t show the ceremonies live, but I managed to find a pirated live stream of the BBC feed so we could follow along while we ate (thank you, Intertubes).

I was a little disappointed that Roger Bannister didn’t get to light the torch, but the “passing-the-torch-to-the-younger-generation” thing was a nice break from the usual celebrity athlete. The music from formerly rebellious bands such as the Sex Pistols and Pink Floyd that was played during the ceremonies made it clear that I’m not part of that younger generation.

I don’t schedule my Olympic TV time around specific events, except for the marathons. I just turn on the TV when I have spare time and choose from whatever’s on. After my run Saturday morning, it was the men’s cycling road race. In an exciting finish, Alexandr Vinokurov scooted by Rigoberto Uran Uran on the right just as Uran Uran was looking to his left.  But almost every event is exciting when the stakes are this high.  People who spend their whole lives training for something find out whether their hopes and dreams will come true. The Cape Cod marathon isn’t the Olympics, and I’m no threat to win, but my efforts to reach my own goals help me identify with Olympic athletes and empathize with their successes and failures. That’s why sports are worth watching. They help us share the feelings that make us human.

Saturday afternoon Ruth and I went to Wakefield to volunteer at the 24 Hour Around the Lake race. Four races start Friday evening, a marathon, a 12 hour ultramarathon, a 24 hour relay, and the 24 hour ultra. Ruthanne joined us to work the last few hours of the race and help clean up.  Ruth and Ruthanne took care of the aid station while I helped the race directors pick up whatever gear we could to keep it safe from the imminent storms.

Some of my most exciting experiences as a runner have happened at this race. That includes the 2001 edition of the relay, when SRR’s Bob Ross passed Tyrone Tse from the Irish-American Track Club in the last 50 yards to win the day only long event by 2 seconds.  Another moment I’ll never forget was the year I stood in knee-deep water holding on to an aluminum pole to keep the timing tent from blowing away during a lightning storm with the extension cord for the race clock running through the water.  Good times.

But the reason I volunteer every year I can (besides the fact that I help out at SRR events on a regular basis) is the 24-hour individual ultra. The course is brutal, a flat 5K loop around Lake Quannapowitt on concrete and asphalt with very little shade. It’s always hot, often humid, and the frequent thunderstorms don’t do much to help. I’m amazed by runners that can handle that for 24 hours.

Since the course is a short loop, the race is convenient to watch. I get to see runners get beaten down and still struggle on. It’s sort of like the Olympics. Desire and determination, and sometimes desperation, are clearly visible on every face.

The weather was relatively cool this year.  High temperatures were only in the 70’s, though there was still plenty of humidity.  The worst weather was while we were there.  The thunderstorms finally showed up, bringing heavy rains and cooler temperatures that left tired ultrarunners (and volunteers) wet and shivering in their wake. 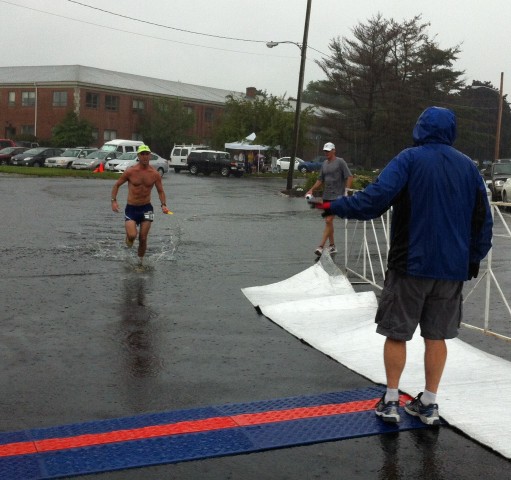 As the clock approached 24 hours I went out in the rain to take pictures of runners at the finish line while Ruth dashed out from the tent to hang finisher’s medals around their necks.  Scott Traer won and set a new course record, running 44 laps (140.41 miles) in 24 hours after finishing second in 2011. On the women’s side, Barbara Bell reclaimed her crown by running 32 laps (102.35 miles) to take her fourth victory.  Barbara also finished second in 2011.

I’ve never done the whole race myself, though I’ve run 30 or 40 miles a couple of times, either as part of a relay team of people stringing together long training runs or while pacing someone else in the ultra. The biggest challenge is the tedium.  Well, that and the concrete.  But someday I’ll have to give it a try. Hopefully on another cool and cloudy year.

This morning, after my bike ride I met Ruth’s crew at the coffee shop, where we got a race report from Adena, who was 3rd woman overall (1st master) in the 12 Hour ultra.  Then this afternoon, Ruth and I are off to Norwood for a picnic to celebrate the first year of Level Renner magazine at editor Kevin Gorman’s house.  My articles have appeared in Level Renner (get a free subscription here!) regularly since the second issue, but this will be the first time I’ve met most of the staff In Real Life.  Sadly, I have to take it easy at the grill – my weight’s creeping up again.