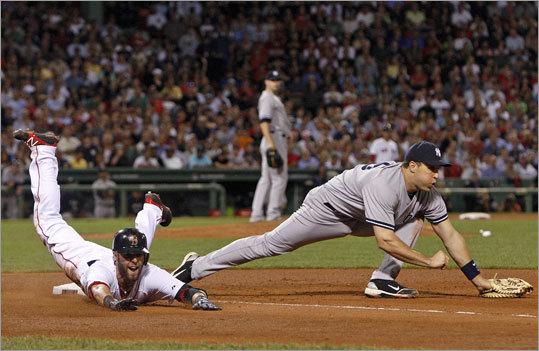 It’s September.  The New York Yankees just took two out of three from the Red Sox to pull within a half-game in the AL East pennant race.  And no one cares.

The second-place Yankees currently have an 8.5 game lead in the AL Wild Card race, so even if they don’t catch the Red Sox, they’ll still probably make the playoffs.  “The Battle for Home Field” or “The Battle to Face the Tigers Instead of the Rangers”  just isn’t enough to keep anyone’s attention.

Ever since baseball added the wild card, this has been a problem.  The baseball season is long, which is a benefit when there’s a race but hurts when everyone is just waiting for the post-season to begin.   The way things are going, baseball will become just like basketball or hockey,  where no one really cares about the regular season.

Baseball could easily fix things.  First, they could add two teams to make 32.  That would make more jobs, so the Player’s Association would be happy.  The owners would get expansion fees, so they’d be happy.  Two new cities would get major league baseball, so they’d be happy.  Some people might complain about diluting the talent, but given the growth in population and the international nature of today’s game, teams actually have a deeper talent pool to draw from now than they did 50 years ago, when there were only 16 teams.

Take the 32 teams, divide them up into two leagues of 16, then divide the leagues up into four divisions of four.  Only the eight division winners make the playoffs.  Just as many teams make it as today, but no losers get in.  All the division races would mean something, and having eight pennant races increases the chance of a decent battle to the finish.

The other necessary fix is to make the schedules fair.  Keep interleague play if you must, but each team in a division should play the same schedule.  Why should the Red Sox play the Braves because of some imaginary rivalry when another AL East team gets the pathetic Nationals?

Baseball knows it has problems.  By random chance, the problems with the playoffs stand out this year.  Baseball is supposedly looking at things like realignment of the existing leagues and adding more wild cards.  That may help sell more tickets in the short term, but won’t fix the underlying problems.

The system isn’t really that hard to fix, but given its history, I’m confident baseball will find a way to screw it up.

One thought on “Baseball needs fixin’”